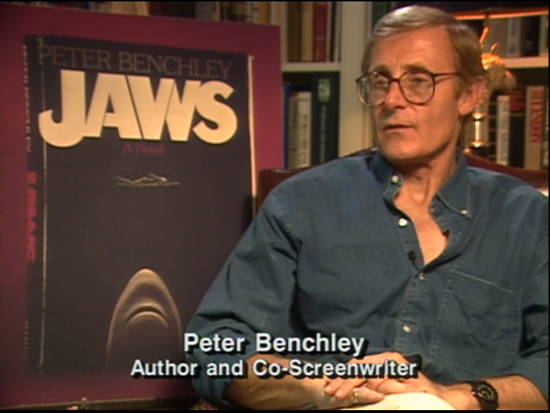 Peter Bradford Benchley (, -11 February 2006) was an American author best known for writing the novel "Jaws" and co-writing the for its film adaptation. The subsequent film directed by and co-written by Benchley is generally acknowledged as the first summer blockbuster. Benchley also wrote "The Deep" and "The Island" which were also adapted into films.

He was the son of author and grandson of founder . His younger brother, , is a writer and actor. Peter Benchley was an alumnus of and .

After graduating from college, he worked for "", then as an editor at "" and a speechwriter in the for President . [ [http://www.telegraph.co.uk/news/main.jhtml?xml=/news/2006/02/14/db1401.xml Peter Benchley - Telegraph ] ] He developed the idea of a man-eating shark terrorising a community after reading of a fisherman [http://www.fmundus.com/"Frank Mundus"] catching a 4,550 pound great white shark off the coast of in 1964. He also drew some material from the tragic .

Doubleday editor saw some of Benchley's articles and invited Benchley to lunch to discuss some ideas for books. Congdon was not impressed by Benchley's proposals for non-fiction but was interested in his idea of a novel about a great white shark terrorizing a beach resort. Congdon offered Benchley an advance of $1,000 leading to the novelist submitting the first 100 pages. Much of the work had to be rewritten as the publisher was not happy with the initial tone. Benchley worked by winter in a room above a furnace company in , and in the summer in a converted turkey coop in . [Hawtree, Christopher. [http://www.guardian.co.uk/news/2006/feb/14/guardianobituaries.obituaries "Peter Benchley: He was fascinated by the sea, but his bestselling novel tapped into a primeval fear of the deep"] , "", , . Accessed , . "In 1971, he was asked by Tom Congdon, an editor at the publishers Doubleday, if he had anything in mind for a book, and he pitched this as a "long story"; he produced a hundred pages, and, with a $1000 advance, he reworked it steadily, holing up to do so, during the winter, in a room above the Pennington Furnace Supply Co in Pennington, New Jersey, and, by summer, in an old turkey coop at Stonningtonsic, Connecticut."]

"Jaws" was published in 1974 and became a great success, staying on the bestseller list for some 44 weeks. Steven Spielberg has said that he initially found many of the characters unsympathetic and wanted the shark to win. [http://news.bbc.co.uk/1/hi/entertainment/arts/3400291.stm] Book critics such as Michael Rogers of "" shared the sentiment but the book struck a chord with readers.

Benchley co-wrote the with (along with the uncredited and , who provided the first draft of the memorable USS Indianapolis speech) for the Spielberg film released in 1975. Benchley made a as a news reporter on the beach. The film, starring , and Robert Shaw, was released in the summer season, traditionally considered to be the graveyard season for films. However, decided to break tradition by releasing the movie with extensive television advertising. Tautly edited by , featuring an ominous score by and infused with such an air of understated menace by director that he was hailed as the heir apparent to "Master of Suspense" , "Jaws" became the first movie to gross $100 million at the US box office. It eventually grossed $450 million globally. used a similar strategy in 1977 for "" which broke the box office records set by "Jaws", and hence the summer blockbuster was born. [http://news.bbc.co.uk/1/hi/entertainment/film/1653733.stm] The film spawned three sequels, none of which matched the success of the original critically or commercially, two , "Jaws" in 1987 and "" in 2006; both met with mostly negative critical attention. The film was also adapted into a theme park attraction at (in and ), and two musicals: "JAWS The Musical!", which premiered in the summer of 2004 at the Minnesota Fringe Festival; and "Giant Killer Shark: The Musical", which premiered in the summer of 2006 at the .

Benchley estimated that he earned enough from book sales, film rights and magazine/book club syndication to be able to work independently as a film writer for ten years ["Peter Benchley", Online, Gale, 2003] .

His reasonably successful second novel, "The Deep", is about a honeymooning couple discovering two sunken treasures on the Bermuda reefs -- 17th century Spanish gold and a fortune in World War Two-era morphine -- who are subsequently targeted by a drug syndicate. This 1976 novel is based on Benchley's chance meeting in with diver Teddy Tucker while writing a story for "". Benchley co-wrote the screenplay for the 1977 film release, along with and an uncredited . Directed by and starring Robert Shaw, and , "The Deep" was a moderate success, and one of the Top 10 highest grossing films in the US in 1977, though its box office tally fell well short of "Jaws".

"The Island", published in 1979, was a story of descendants of 17th century s who terrorize pleasure craft in the Caribbean, leading to the mystery. Benchley again wrote the screenplay for the film adaptation. But the movie version of "The Island", starring and David Warner, failed at the box office when released in 1980.

During the 1980s, Benchley wrote three novels that did not sell as well as his previous works. However, "Girl of the Sea of Cortez", a beguiling -type fable about man's complicated relationship with the sea, was far and away his best reviewed book and has attracted a considerable cult following since its publication. "Sea of Cortez" signposted Benchley's growing interest in ecological issues and anticipated his future role as an impassioned and intelligent defender of the importance of redressing the current imbalance between human activities and the marine environment. "Q Clearance" published in 1986 was written from his experience as a staffer in the Johnson . "Rummies" (aka Lush), which appeared in 1989, is a semi-autobiographical work, loosely inspired by the Benchley family's history of alcohol abuse. While the first half of the novel is a relatively straightforward (and harrowing) account of a suburbanite's descent into alcoholic hell, the second part -- which takes place at a New Mexico substance abuse clinic -- veers off into wildly improbable thriller-type territory.

He returned to nautical themes in 1991's "Beast" written about a threatening Bermuda. "Beast" was brought to the small screen as a made for TV movie in 1996, under the slightly altered title "The Beast". His next novel, "White Shark", was published in 1994. The story of a Nazi-created genetically engineered shark/human hybrid failed to achieve popular or critical success. It was also turned into a made-for-TV movie titled "Creature", with Christopher Lehmann-Haupt of the "New York Times" saying it "looks more like than any fish". ("Peter Benchley" Contemporary Authors Online, Gale, 2003) In 1999, the television show "" was created, about a group of plane crash survivors in the middle of a vast jungle.

In the last decade of his career, Benchley wrote non-fiction works about the sea and about sharks advocating their conservation. Among these was his book entitled "Shark Trouble," [Benchley, Peter: "Shark Trouble," page 9. Random House, 2003.] which illustrated how hype and news sensationalism can help undermine the public's need to understand marine ecosystems and the potential negative consequences as humans interact with it. This work, which had editions in 2001 and 2003, was written to help a post-"Jaws" public to more fully understand "the sea in all its beauty, mystery, and power." [Benchley, P: "Shark Trouble", page xiii. Random House, 2003.] It details the ways in which man seems to have become more of an aggressor in his relationship with sharks, acting out of ignorance and greed as several of the species become increasingly threatened by overfishing.

Benchley was a member of the and a spokesman for its Oceans Program: " [T] he shark in an updated "Jaws" could not be the villain; it would have to be written as the victim, for, world-wide, sharks are much more the oppressed than the oppressors." [http://www.theroyalgazette.com/apps/pbcs.dll/article?AID=/20060217/MIDOCEAN/102170132]

Benchley's legacy continues as part of The Peter Benchley Shark Conservation Award. The Shark Research Institute presents this award which is given to honor Benchley's memory and ensure continuation of his conservation efforts on behalf of sharks. The Shark Research Institute, is a multi-disciplinary non-profit 501(c)(3) scientific research organization. It was created to sponsor and conduct research on sharks and promote the conservation of sharks. Founded in 1991 at Princeton, New Jersey, USA, SRI has field offices throughout the United States, including Connecticut, North Carolina, Pennsylvania, and Texas, as well in Canada, the Galapagos Islands, Honduras, Mexico, South Africa, Taiwan and the Seychelles. A new data collecting site has been established in Australia.

The first of the Peter Benchley Shark Conservation Awards were presented on May 8, 2007, at The Explorers Club in New York. The gala event was attended by celebrities and marine conservationists from around the world. The 2007 winners of these prestigious awards were Jason Holmberg, Ecocean; Sonja Fordham, Ocean Conservancy; and Rob Stewart, "Sharkwater." Also in attendance were Wendy Benchley and Stan Waterman, President of the Shark Research Institute, actor-writer and brother Nat Benchley, and filmmaker Guy Perrotta . [http://www.sharks.org]