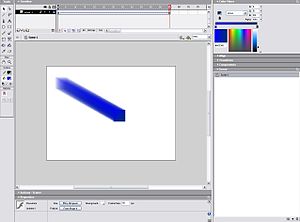 Simple animation in Flash MX; a square moving across the screen in a motion tween, one of the basic functions of Flash. Onion skinning is used to show the apparent motion of the square.

In the late 1990s, when for most Internet users, bandwidth was still at 56 kbit/s, many Flash animation artists employed limited animation or cutout animation when creating projects intended for web distribution. This allowed artists to release shorts and interactive experiences well under 1 MB, which could stream both audio and high-end animation. One example is the first episode of The Goddamn George Liquor Program released in 1999, rendered at only 628kB.

Flash is able to integrate bitmaps and other raster-based art, as well as video, most Flash films are created using only vector-based drawings which often result in a somewhat clean graphic appearance. Some hallmarks of poorly-produced Flash animation are jerky natural movements (seen in walk-cycles and gestures), auto-tweened character movements, lip-sync without interpolation, and abrupt changes from front to profile view.

Developed by Macromedia, Flash (along with Macromedia's other programs) was acquired by software giant Adobe in April 2005, the newest version being Flash CS5.5.

The first prominent use of the Flash animation format was by Ren & Stimpy creator John Kricfalusi. On October 15, 1997, he launched The Goddamn George Liquor Program, the first cartoon series produced specifically for the Internet.[1] The series starred George Liquor (a fictional character rumored to have ended Kricfalusi's employment on Ren & Stimpy) and his dim-witted nephew Jimmy The Hapless Idiot Boy. Later, Kricfalusi produced more animated projects with Flash including several online shorts for Icebox.com, television commercials, and a music video. Soon after that, web cartoons began appearing on the internet with much more regularity.

On February 26, 1999,[2] in a major milestone for Flash animation, the popular web series WhirlGirl became the first regularly scheduled Flash animated web series when it premiered on the premium cable channel Showtime in an unprecedented telecast and simultaneous release on the Showtime website.[3] Created by David B. Williams and produced by Visionary Media, the studio he founded, WhirlGirl follows the adventures of a young superheroine fighting for freedom in a future ruled by an all-powerful "mediatech empire." The series originally launched in the Spring of 1997 as a web comic with limited animation and sound.[4] After gaining online syndication partners including Lycos.com and WebTV, the series first adopted Flash animation in July 1998.[5] Following her Showtime debut, the titular heroine appeared in over 50 Flash webisodes on the Showtime website[6] and starred in a million dollar multimedia Showtime marketing campaign.[7]

About the same time, Joe Cartoon launched the interactive animation "Frog in a Blender" to become one of the very first true "Viral Hits" on the internet gaining more than 90 million views since its release in 1999.

The Von Ghouls went live in November 1999, featuring the first music group with cartoon episodes online including original songs, in the vein of Saturday morning cartoons of the 1970s. A number of popular portal sites featured Flash animation during the dot-com boom of the late 1990s, including Icebox, MondoMedia, CampChaos, MediaTrip, Bogbeast and AtomFilms. Stan Lee of Marvel Comics launched an animated comics site.

The Internet also saw the proliferation of many adult-only Flash cartoon sites. Some of the shows from that period made the transition to traditional media, including Queer Duck, Gary the Rat, Happy Tree Friends, and the politically-minded JibJab shorts. Occasionally, the trend has been reversed: after being canceled from both ABC and Fox, Atom Films and Flinch Studio created net-only episodes of The Critic in 2000–2001. In another instance, Flash almost made the transition to the big screen. In 2001, production began on what would have been the first Flash-animated feature film, the ill-fated Lil' Pimp, which also began life as an Internet series. As potentially controversial as its subject matter was, it had a relatively large budget, a number of well-known actors (including William Shatner, Bernie Mac, and Lil Kim), a full crew, and a running time of nearly 80 minutes. Although Sony Pictures decided not to release the film, it was eventually released on DVD by Lion's Gate.

Several recording companies experimented with releasing animated music videos to promote their artists' releases online, including Madonna, Beastie Boys and Tenacious D, however none became the hit that allowed for the expansion of Flash animated music videos. Adam Sandler and Tim Burton among others, released original Internet-only animated works, but were not able to devise successful financial models and the trend dissipated, largely as a result of a lack of viable micropayment systems.

Other television series, such as Home Movies and Harvey Birdman, Attorney at Law, both broadcast on Cartoon Network's Adult Swim programming block, have switched to Flash from other animation technology.

Many animation film festivals have responded to the popularity of Flash animation by adding separate categories in competition for "web cartoons" or "Internet cartoons." Additionally, several exclusively web-based Flash competitions have been established. It is speculated that only the category "made for Internet" will survive, as competitions at animation film festivals are typically arranged in categories defined by film length and distribution channel, rather than by animation techniques or tools used to create the films.

While the creation of animation using Flash can be easier and less expensive than traditional animation techniques, the amount of time, money, and skill required to produce a project using the software depends on the chosen content and style. Internet distribution is considerably easier and less expensive than television broadcasting, and websites such as Newgrounds provide free hosting. Many Flash animations are created by individual or amateur artists. Many Flash animations first distributed on the web became popular enough to be broadcast on television, particularly on such networks as MTV and G4TV...

Flash animation production is enjoying considerable popularity in major animation studios around the world, as animators take advantage of the software's ability to organize a large number of assets (such as characters, scenes, movements, and props) for later re-use. Because Flash files are in vector file format, they can be used to transfer animation to 35 mm film without any compromise in image quality. This feature is used by several independent animators worldwide, including Phil Nibbelink, who saw his 77-minute feature film Romeo & Juliet: Sealed with a Kiss released in theaters in 2006. For Disneyland's 50 Magical Years film featuring Live action Steve Martin interacting with Donald Duck, the hand drawn animation of Donald Duck was cleaned up and colored in Flash. The Drawn Together Movie: The Movie!, a straight-to-DVD feature of the animated series Drawn Together, produced by Comedy Central and released in April 2010, discarded the series' traditional animation and used Flash animation instead.

Creating Flash animation from other software

There are a number of other software packages available that can create output in the .swf format. Among these are Toon Boom, Vectorian Giotto, CelAction2D, Toufee, KoolMoves, Express Animator, Alligator Flash Designer, Amara Web Animation software and Anime Studio. These front-ends often provide additional support for creating cartoons, especially with tools more tailored to traditionally-trained animators, as well as additional rigging for characters, which can speed up character animation considerably. Additionally, there are programs available which translate 3D information into 2D vectors.