Otto Kumm, (1 October 1909 in Hamburg – 23 March 2004) was an SS-Brigadeführer and Generalmajor of the Waffen-SS. He was also a recipient of the Knight's Cross of the Iron Cross with Oak Leaves and Swords. After the war, he became one of the founders and the first head of the veteran organization HIAG.

As the division commander, Otto Kumm and the LSSAH took part in Operation Spring Awakening (Frühlingserwachen) (6 March 1945 – 16 March 1945). It was the last major German offensive launched during World War II on 6 March 1945. The Germans launched attacks in Hungary near the Lake Balaton area on the Eastern Front. This area included some of the last oil reserves still available to the Germans. Almost inevitably, Operation Spring Awakening was a failure. Despite early gains the offensive was far too ambitious in scope. After the failure of Operation Spring Awakening, Sepp Dietrich's 6th SS Panzer Army and the LSSAH retreated to the Vienna area.[3] The Germans desperately prepared defensive positions in an attempt to guard the city against the fast arriving Soviets, in what become known as the Vienna Offensive. 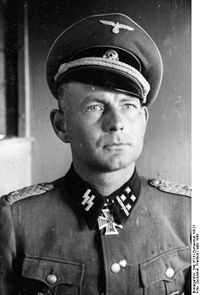 After Vienna fell, the LSSAH was recorded by the German Army High Command (Oberkommando der Wehrmacht or OKW), from 20 April to 2 May, to have moved from Zossen (near Berlin) to the area of Mürwik (part of Flensburg in northern Germany, near Denmark). There Otto Kumm and the LSSAH surrendered to the advancing British forces.[4] The rest of the LSSAH (made up of the Leibstandarte SS Guard Battalion assigned to guard the Führer) ended its fighting days in Berlin.[5]

Otto Kumm survived the war and went on to become a successful businessman. Kumm was a founder and the first head of the Waffen SS veteran organization, HIAG. He died on the 23 March 2004. At the time of his death, Kumm was the last surviving SS-Brigadeführer and Generalmajor of the Waffen-SS. He was also the last surviving Waffen-SS holder of Knight's Cross of the Iron Cross with Oak Leaves and Swords.