Nemirseta (German: Nimmersatt) is a district of the Lithuanian seaside resort Palanga, located on the Baltic coast north of Klaipėda. 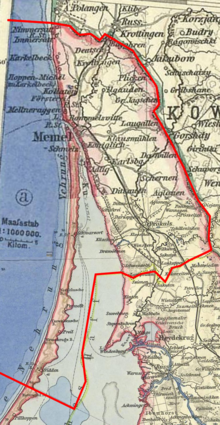 East Prussian Memel district 1818-1920, with Nimmersatt at its northernmost tip

The place, which consists mainly of two deserted buildings which lost their purpose as a border check point, is notable for having marked for about five centuries the northernmost point of German Ostsiedlung settlements. During the Prussian Crusade from about 1200 onwards, the area of the local Baltic Skalvian and Curonian pagans was conquered by German military orders, at first by the Sword Brethren, after the 1236 Battle of Saule by the Teutonic Knights. When in the early 15th century the State of the Teutonic Order interfered with the neighbouring Grand Duchy of Lithuania and the Kingdom of Poland, culminating in the Polish–Lithuanian–Teutonic War, the 1422 Treaty of Melno finally fixed the borders of the Monastic State with the Lithuanian Samogitia region.

In the course of the Protestant Reformation, the Teutonic State in 1525 dissolved and the Nemirseta area became the northernmost outpost of secularized Duchy of Prussia, from 1618 of united Brandenburg-Prussia under the Lutheran House of Hohenzollern. By the 1660 Treaty of Oliva Elector Frederick William I of Brandenburg was able to shift off Polish suzerainty. When the Hohenzollern Kingdom of Prussia merged into the German Empire in 1871, Nimmersatt became the its northernmost settlement, schoolchildren were taught the riddle Nimmersatt, wo das Reich sein Ende hat, which means "Nimmersatt, where the Empire ends". Nimmersatt consisted mostly of two buildings, providing shelter for border control personnel and travellers from and to Imperial Russias Lithuanian provinces.

A part of the Province of East Prussia until after World War I, in 1920 Nemirseta was with the Klaipėda Region (Memelland) separated from Germany according to the Treaty of Versailles. It was put under administration of the League of Nations and controlled by French forces, until the 1923 Klaipėda Revolt, after which it was annexed by Lithuania. For a brief period Nemirseta again became a border checkpoint, when Lithuanian Foreign Minister Juozas Urbšys under pressure of Nazi Germany in March 1939 signed an agreement after which the Klaipėda Region was reannexed to the German nation. The secret protocol of the Molotov–Ribbentrop Pact allocated it to the German sphere of influence.

After World War II, according to the 1945 Potsdam Agreement, the region again became part of the Lithuanian Soviet Socialist Republic and the place, now called Nemirseta, finally lost its meaning as a German border town. It was incorporated into the Palanga municipality in 1975.