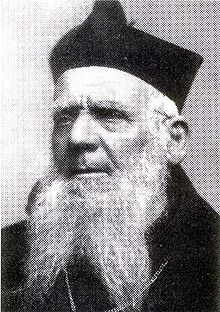 Guglielmo Massaia (born 9 June 1809, at Piovà in Piedmont, Italy; died at San Giorgio a Cremano, 6 August 1889) was an Italian Catholic missionary, Capuchin and Cardinal. His baptismal name was Lorenzo; he took Guglielmo as religious name.

He was first educated at the Collegio Reale at Asti under the care of his elder brother Guglielmo, a canon and precentor of Asti Cathedral. On the death of his brother he passed as a student to the diocesan seminary; but at the age of sixteen entered the Capuchin Franciscan Order, receiving the habit on 25 September 1825.

Immediately after his ordination to the priesthood, he was appointed lector of theology; but even whilst teaching he acquired some fame as a preacher and was chosen confessor to Prince Victor Emmanuel, afterwards King of Italy, and Ferdinand, Duke of Genoa. The royal family of Piedmont would have nominated him on several occasions to an episcopal see, but he wanted to join the foreign missions of his order.

He obtained his wish in 1846. That year the Congregation of Propaganda, at the instance of the traveller Antoine d'Abbadie, determined to establish the Vicariate Apostolic of Galla, for the Oromo in Ethiopia. The mission was confided to the Capuchins, and Massaia was appointed first vicar-apostolic, and was consecrated in Rome on 24 May of that year.

On his arrival in Ethiopia he found the country in a state of religious agitation. The titular head of the Ethiopian Orthodox Church, Abuna Qerellos III, had been dead for about 20 years and there was a movement amongst the native Christians towards union with Rome. Massaia, who had received plenary faculties from the pope, ordained a number of native priests for the Coptic Rite; he also obtained the appointment by the Holy See of a vicar-apostolic for the Copts, and himself consecrated the missionary Justin de Jacobis to this office. But this act aroused the enmity of the Coptic Patriarch of Alexandria, who sent a bishop of his own, Abuna Salama III, to Ethiopia.

As a result of the ensuing political agitation, Massaia was banished from the country and had to flee under an assumed name. In 1850 he visited Europe to gain a fresh band of missionaries and means to develop his work: he had interviews with the French Minister of Foreign Affairs in Paris, and with Lord Palmerston in London. On his return to the Oromos he founded a large number of missions; he also established a school at Marseilles for the education of Oromo boys freed from slavery; besides this he composed a grammar of the Oromo language which was published at Marseilles in 1867.

During his thirty-five years as a missionary he was exiled seven times, but he always returned. However, in 1880 he was compelled by ill-health to resign his mission. In recognition of his merit, Pope Leo XIII raised him to the titular Archbishopric of Stauropolis, and on 10 November 1884, to cardinal of Saint Vitalis.

At the command of the pope he wrote an account of his missionary labours, under the title, I miei trentacinque anni di missione nell' alta Etiopia, the first volume of which was published simultaneously at Rome and Milan in 1883, and the last in 1895. In this work he deals not only with the progress of the mission, but with the political and economic conditions of Ethiopia as he knew them.

He is buried in the Capuccini's friary in Frascati were lived the last ten years.