Chenopodium is a genus of about 150[verification needed] species of perennial or annual herbaceous flowering plants known as the goosefoots, which occur almost anywhere in the world. It is placed in the family Amaranthaceae in the APG II system; older classifications separate it and its relatives as Chenopodiaceae, but this leaves the rest of the Amaranthaceae polyphyletic. However, among the Amaranthaceae, the genus Chenopodium is the namesake member of the subfamily Chenopodioideae. The genus Dysphania is closely related, and contains several species formerly placed in Chenopodium, such as epazote (D. ambrosioides).

In Australia, the larger Chenopodium species are among the plants called "bluebushes". Chualar in California is named after a Native American term for a goosefoot abundant in the region, probably the California goosefoot (C. californicum). 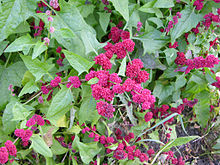 Strawberry blite (C. capitatum) leaves are edible, as are the red inflorescences – though they look like fruit, they actually taste like spinach.

The genus Chenopodium contains several plants of minor to moderate importance as food crops as leaf vegetables – used like the closely related spinach (Spinacia oleracea) and similar plants called quelite in Mexico – and pseudocereals. These include white goosefoot (C. album), Good King Henry (C. bonus-henricus), strawberry blite (C. capitatum), leafy goosefoot (C. foliosum), kañiwa (C. pallidicaule) and quinoa (C. quinoa). On the Greek island of Crete, tender shoots and leaves of a species called krouvida (κρουβίδα) or psarovlito (ψαρόβλητο) is eaten by the locals, boiled or steamed. As studied by Kristen Gremillion and others, goosefoots have a history of culinary use dating back to 4000 BC or earlier, when pitseed goosefoot (C. berlandieri) was a staple crop in the Native American eastern agricultural complex, and white goosefoot was apparently used by the Ertebølle culture of Europe.

There is increased interest in particular in goosefoot seeds today, which are suitable as part of a gluten-free diet. Quinoa oil, extracted from the seeds of C. quinoa, has similar properties, but is superior in quality, to corn oil. Oil of chenopodium is extracted from the seeds of epazote, which is not in this genus anymore. Shagreen leather was produced in the past using the small, hard goosefoot seeds. C. album was one of the main model organisms for the molecular biological study of chlorophyllase.

Goosefoot pollen, in particular of the widespread and usually abundant C. album, is an allergen to many people and a common cause of hay fever. The same species, as well as some others, have seeds which are able to persist for years in the soil seed bank. Many goosefoot species are thus significant weeds, and some have become invasive species.

Certain species grow in large thickets, providing cover for small animals. Goosefoot foliage is used as food by the caterpillars of certain [[Lepidoptera. The seeds are eaten by many birds, such as the yellowhammer (Emberiza citrinella) of Europe or the white-winged fairy-wren (Malurus leucopterus) of Australia. Goosefoot pathogens include the positive-sense ssRNA viruses - apple stem grooving virus, sowbane mosaic virus and tobacco necrosis virus. 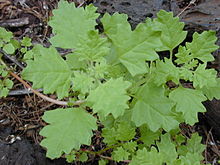 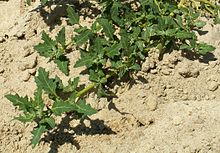 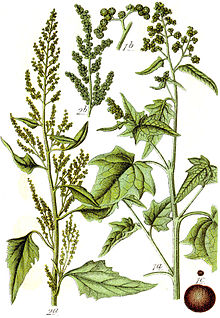 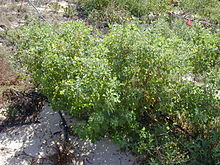