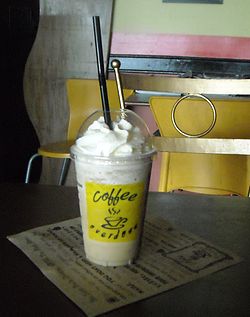 An iced cappuccino with cream on top.

Iced coffee is a cold variant of the beverage coffee.

There are several ways of preparing iced coffee. Ordinary hot-brewed coffee can be served cold, although this may result in a bitter-tasting product. Cold brewing relies on time, rather than heat, to transfer the coffee flavor to the water. In order to achieve this, ground coffee is soaked in water for hours and then filtered. This may be done in any container, such as a mason jar or French press, although commercialized cold brewing systems also exist.[1]

In more recent times it has become common for coffee shops to offer 'iced' versions of their most popular coffee drinks. The iced latte and iced mocha are the two most common examples of this. A quick way of preparing such drinks is to make a small quantity of strong, hot espresso, dissolving the required sweetener/flavorings in the hot liquid and then pouring this directly into a cup of ice cold milk. This method is common in busier coffee shops.

Depending on the brewing method, iced coffee can be served already chilled, or poured hot, double strength, over an equal amount of ice. Because sugar does not dissolve readily into cold liquids, it must be added either directly to the hot base, or to the finished product in the form of simple syrup, which can be made by mixing quantities of water and sugar, then simmering over low heat until the desired viscosity is attained. Instead of sugar, most synthetic substitutes such as aspartame (Equal, Nutrasweet) or sucralose (Splenda) will dissolve readily into cold coffee.

Iced coffee is distinguished from "cold coffee", which is often sweet milk coffee (without water; only milk) served cold.

Iced coffee has been sold commercially in Australia since the late 19th century in the form of a syrup, an example of which is Bushells Coffee and Chicory Essence, and more recently as a prepackaged, ready to consume drink.

One popular brand is Farmers Union Iced Coffee, which outsells Coca-Cola in South Australia[2] and has become an official icon and legend in that state.[3] This particular brand is now widely available in Queensland (as far north as Mackay), Northern Territory, Victoria, New South Wales and Tasmania. The product is not yet available in Western Australia.

Jacaranda Iced Coffee is also popular in South East Queensland, originating from Ipswich and produced in both Ipswich and Tingalpa by Dairy Farmers. Many dedicated fans drink it daily and refer to it affectionately as 'Jac' or to drink it, 'having a Jac' or 'having a Jacaranda'. Interestingly, though not verified by the manufacturers, the number on the bottom of the carton indicates its source with fans preferring the original Ipswich batches, known as 'Number 2'.[4]

In Canada, the popular Tim Hortons coffee chain sells iced cappuccinos, known locally as Ice Capps. The coffee drink mix comes to the Tim Hortons stores as a thick black syrup which is mixed at 3 parts water to one part syrup in a slurpee machine. The frozen coffee drink is then blended with cream at the time of service (or blended with milk, or chocolate milk upon customer request). The Ice Capp can also be prepared as a Supreme, which includes a flavour shot, whipped topping, and either caramel or chocolate syrup. There is also a Brownie Supreme, which is made with chocolate milk, and mixed with bits of brownie. This is then topped with whipped topping, and finished off with more bits of brownie scattered on top. The chain has also recently introduced traditional iced coffee to its Canadian menu in addition to its U.S. menu. 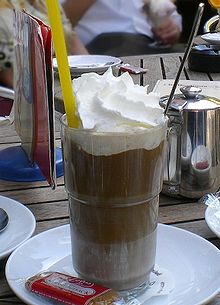 In Germany there are different types of Eiskaffee (iced coffee). The most widespread form is a flavoured milk drink similar to Australian iced coffee, generally spelled as Eiscafé (from the French café) and available in German coffeehouses and in Eisdielen (ice cream parlours). However, this type of iced coffee is rarely available in German supermarkets. The most widespread form of iced coffee in supermarkets is a canned version from a variety of brands with different flavours such as Cappuccino and Espresso. This iced coffee is very similar to the canned iced coffee in the UK and in the case of some brands (particularly Nestlé) actually the same product.

In Greece one of the most popular coffees is a variation of iced coffee called Frappé, invented by Yiannis Dritsas. It is stirred in an electric mixer and thus has a foam on top. Milk is optional. It became well-known during the 2004 Summer Olympics in Athens, when many tourists became fond of it and an article on the Los Angeles Times was written about it.[2]

Frappe is served in Greece and Cyprus. However, when you ask for iced-coffee it means frappe with a scoop of vanilla ice-cream in it.

"Cold coffee" has become an extremely popular drink in India over the last several years. Typically it consists of Nescafe instant coffee mixed with cold milk in a blender, producing a thin, coffee-flavored smoothie or often mixed with vanilla for icy thick experience. South Australians, especially in Adelaide, are also known for this. A more upscale version is popular in the espresso bar chains Barrista and Cafe Coffee Day. This is made with a shot of espresso and cold milk, like a latte.

"Ice Café" as pronounced in Hebrew, is a coffee-flavored slushie, (coffee blended with crushed ice to which sugar and milk is added). It is somewhat popular in Israel, in response to the often hot weather. Cafe kar is similar to an iced latte (espresso, milk, and sugar water, often served on the side).

In Italy, Nestlé introduced the Frappé coffee under its Nescafé Red Cup line, with the name Red Cup Iced Coffee. Many Italian coffee bars serve "caffè freddo," which is straight espresso kept in a freezer and served as icy slush. In the Salento region of Puglia, this was perfected by brewing the espresso freshly, adding the desired amount of sugar and finally pouring it in a whiskey glass filled with ice cubes right before being served, known as Caffè in ghiaccio, coffee on the rocks.[5]

In Japan, iced coffee (アイスコーヒー, aisu kōhī?) has been drunk since Taishō period (around 1920s) in coffeehouses. It is served with gum syrup and milk. Cold tea was already popular, so it was natural to drink cold coffee. In 1969, UCC Ueshima Coffee released canned coffee, which made coffee available everywhere. Today, canned liquid coffee is consumed both cold and hot.

Iced coffee is also popular in the Philippines, and it is served in a number of cafés. Notable chains of Philippines coffee shops include Coffee Overdose, Figaro Coffee, Old Manila Coffee House and Fiorgelato Cafe. For a more elaborate version, a scoop of ice cream is added on top. There are also Ready-to-Drink Coffee in cans. One up and coming brand is Rosewood Kaffe Chilled Black Coffee which is made from the famous Philippine barako coffee that has stronger aroma and flavor.

The iced coffee is a very well known drink in Saudi Arabia after hot coffee. Now iced coffee has become a preferable drink among the youth especially in the summer when the temperature reaches 50 ℃. Iced coffee now started to be shown in the retail business by imported and local producers. Recently, iced coffee (Nadeccino)has been introduced by a dairy company called NADEC. Another company called ALrabei has introduced flavored iced coffee.

Thai iced coffee is brewed using strong black coffee, sweetened with sugar, heavy cream (or half-and-half) and cardamom, and quickly cooled and served over ice. Some variations are brewed using espresso. Thai iced coffee can be served with whipped cream on top for a layered effect, and garnished with cinnamon, vanilla and/or anise. It is a common menu item at Thai restaurants and works well after a spicy meal.

In United Kingdom, iced coffee comes in a variety of forms. There is a canned version, produced by Nestlé, who make a variety of flavours such as Cappuccino and Cafe mocha. These cans are found in most (if not all) supermarkets and are usually found in the tea/coffee aisle, as opposed to being ready chilled, which is meant to be done by the customer at their own home.

Long popular among coffee enthusiasts in the U.S.[citation needed], iced coffee is quickly gaining popularity among the general consumer audience as evidenced by the fact that it is available in mass food franchises such as Dunkin' Donuts and sold bottled in grocery stores. Iced coffee is prepared many different ways, though traditionalists[who?] maintain that true iced coffee is cold-dripped using one of a number of ways. Cold dripped coffee contains up to 70% fewer bitter acids than heat brewed coffee[6], making for a smoother, richer tasting coffee drink[citation needed].

For years[citation needed], consumers made an iced coffee concentrate by soaking ground coffee and chicory with water in a mayonnaise jar[citation needed]. The next day, the grounds would be filtered out. The result was a very strong coffee concentrate that was mixed with milk and sweetened. Today, a device called a Toddy Maker can be used. In a plastic basket, consumers soak their favorite coffee blend in water overnight. The following morning, the basket is stacked atop a glass jar, and the plug is removed from the bottom of the basket. The liquid coffee drips into the jar. The coffee is refrigerated and is good for a week. Any unused coffee can be frozen in ice cube trays.

Many coffee retailers[who?] ignore the taste benefits of cold-dripped coffee[citation needed] and simply pour hot coffee over ice and serve. Iced coffee enthusiasts believe this is a poor way to make iced coffee.[who?] In the 'to go' iced coffee world, there are countless grab-n-go products such as Frappuccinos, which are premade, presweetened and typically shelf stable. These are typically made using heat-brewed coffee.

Vietnamese iced coffee is drip coffee with condensed milk served over ice. In Vietnam, it is typical to use a French press to brew the dark-roasted beans often used to make iced coffee. It is generally a sweeter, heavier drink than its Thai counterpart.