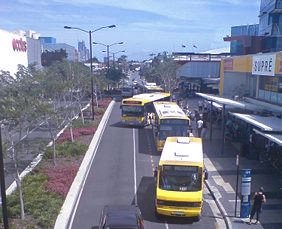 Southport is a suburb and a business district near the mid-point of the Gold Coast, and has one of the city's largest communities. It was named Southport because it was the southernmost port of the colony of Queensland. Southport is recognised as the central business district of the . It has the city’s largest area of office space at 103,818 m². In the past, Southport was the central entertainment location of the Gold Coast. In current times it is set apart from the normal tourist hub of the Gold Coast. However, it has still experienced tourist-driven development and extraordinary growth. Southport has 18 towers either completed, under construction or awaiting commencement.

Southport was once the site of timber mills. A was established to ship logs to . Cutting timber opened up the area for settlement. Early rural industries included sugar growing and livestock grazing.

By Federation Southport had become a tourist seaside spot and had a permanent population of 1230. In 1898 a railway track was built from Brisbane to Southport to accommodate tourism (closed 1964) ["Southport Station in the Later Years" Milne, Rod , April, 2004 pp142-148] . A ferry service - the Myer's Ferry connection - ferried passengers to and a horse and buggy service linked the area to Surfers Paradise. Tourism continued to expand in the first half of the century. The construction of the Jubilee Bridge in 1926 between Southport and Main Beach replaced the ferry service and facilitated further growth. By the 50's Southport was the central entertainment location of the Gold Coast. It was also the administrative center, with a central business district.

The area of coast facing Southport is known as the Broadwater. The Broadwater houses the and a number of marinas. The area is used for fishing, boating, and watersports. It is fronted by park lands which are a popular area with locals. Located opposite Southport on the Broadwater is the theme park . Although the Broadwater water is suitable for swimming, it is only 6 minutes from Surfers Paradise which features high quality beaches and infrastructure including a permanent life guard station. Southport is also bordered by the .

, located in the old Southport CBD, is a large indoor shopping centre containing 233 stores and a Senstadium Cinema. It was established in 1983 on the site of the former milk factory and is home to the major northern bus interchange for the Gold Coast. The opening of the Southport strip mall (the old CBD, located adjacent to the shopping centre) to low-speed through traffic has been a controversial local decision.

The , the only public-only hospital on the Gold Coast, is located in Southport. The surrounding area has been substantially redeveloped, and now includes a number of private medical practices. In 2005, commenced teaching dentistry and medicine at a new building on land adjacent to Gold Coast Hospital. The state government has announced that a new Gold Coast Hospital will be constructed opposite the main campus at Parklands. Plans for the existing hospital site are not yet clear, but general speculation is that it will become a private hospital.

Nearby the Gold Coast Hospital is the large new branch of the Southport Gold Coast Library, which was previously located on the top floor of the . The Southport Branch Library was completed in 2002 and is one of 14 branches of the City's library. Upstairs in the same building is the Local Studies branch library which includes the City's historical collection of materials including documents, photographs, films, advertising and iconic objects and memorabilia

, which was founded in 1911, is located opposite the Hospital and is the only all-girls school on the Gold Coast.

Southport is home to , which was once the largest boarding school in Queensland. The School was founded in 1901 and has a well-known clock tower and chapel. It is also one of the few schools in Australia where cadet service is mandatory.

Southport pool is located on Marine Parade adjacent to Southport Broadwater. It has a 50 metre Olympic pool with diving towers, 33 and 25 metre pools and a 15 metre indoor teaching pool. These pools are heated. There is a children's aquatic playground which includes a wading pool.

There is a major park located along the shore of the Southport Broadwater. The state government has allocated Aus$16M with matched funding from Gold Coast City Council (over $32 million in total), to invest into the parklands. The works will include building a pier along the Southport Mall alignment. The park will be known as Broadwater Park.

The Sundale Shopping Center, which opened on 26 March 1969, was the first of its kind on the Gold Coast costing a record $7.5M but closed in 1989 after the larger Australia Fair Shopping Center opened near by. It was located on 12 acres of prime real estate facing the broadwater and as well as providing panoramic views of the Nerang River from the upper floor it was home to Queensland's first Big W department store as well as a cinema, restaurants, 45 speciality stores and a 7000 vehicle car park. It was proposed as a location for the building of the Gold Coast Convention Center. Such a development would have rejuvenated the old administrative centre of the Gold Coast. However, it lost its bid to Broadbeach, in part because of a lack of tourist accommodation in Southport. The site hosted weekly markets throughout the 1990s for several years after its closure, until its eventual demolition in 2003 upon which, a time capsule was burried where the popular mall once stood. The area is now home to the Brighton on Broadwater development, a mix of high and low rise buildings together with trendy eateries and some retail outlets.

The club has a presence in the area, including a club and function centre.

The Broadwaterway is a that encourages pedestrians and cyclists to travel along the Broadwater foreshores of Southport.

A ferry terminal is planned for a new Pier to be constructed along the Southport Mall alignment.

The project is looking at two possible routes through the Southport CBD.