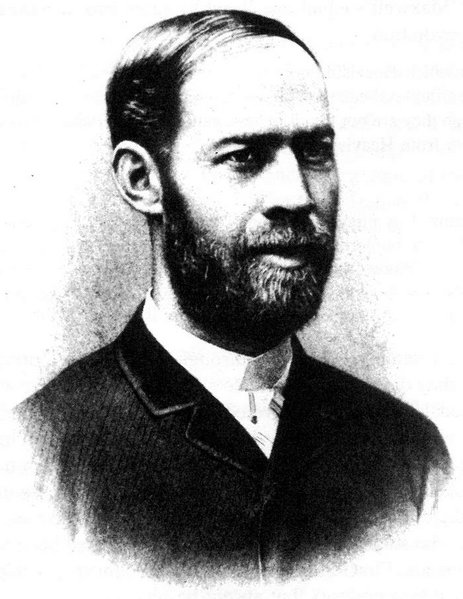 Heinrich Rudolf Hertz (, – , ) was a German physicist who clarified and expanded the electromagnetic theory of light that had been put forth by Maxwell. He was the first to satisfactorily demonstrate the existence of by building an apparatus to produce and detect VHF or UHF waves.

Hertz was born in , Germany, into a prosperous and cultured family. His father, Gustav Ferdinand Hertz, was a barrister and later a senator. His mother was the former Anna Elisabeth Pfefferkorn. He had three younger brothers and one younger sister.

In 1880, Hertz obtained his from the ; and remained for post-doctoral study under Helmholtz.

In 1883, Hertz took a post as a lecturer in theoretical physics at the .

In 1885, Hertz became a full professor at the where he discovered electromagnetic waves.

Hertz always had a deep interest in probably derived from his contacts with (who was Hertz's professor in a laboratory course at the Munich Polytechnic in the summer of 1878). Hertz, however, did not contribute much to the field himself except some early articles as an assistant to Helmholtz in , including research on the of s, a new kind of , and a graphical means of determining the properties of moist air when subjected to changes. [Mulligan, J. F., and H. G. Hertz, "On the energy balance of the Earth," "American Journal of Physics", Vol. 65, pp. 36-45.]

In 1881–1882, Hertz published two articles on what was to become known as the field of . Hertz is well known for his contributions to the field of electrodynamics ("see below") however most papers that look into the fundamental nature of contact cite his two papers as a source for some important ideas. published some critically important observations on Hertz's work, nevertheless establishing this work on contact mechanics to be of immense importance. His work basically summarises how two axi-symmetric objects placed in contact will behave under loading, he obtained results based upon the classical theory of elasticity and continuum mechanics. The most significant failure of his theory was the neglect of any nature of adhesion between the two solids, which proves to be important as the materials composing the solids start to assume high elasticity. It was natural to neglect adhesion in that age as there were no experimental methods of testing for it.

To develop his theory Hertz used his observation of elliptical Newton's rings formed upon placing a glass sphere upon a lens as the basis of assuming that the pressure exerted by the sphere follows an elliptical distribution. He used the formation of Newton's rings again while validating his theory with experiments in calculating the displacement which the sphere has into the lens. K. L. Johnson, K. Kendall and A. D. Roberts (JKR) used this theory as a basis while calculating the theoretical displacement or "indentation depth" in the presence of adhesion in their landmark article "Surface energy and contact of elastic solids" published in 1971 in the Proceedings of the Royal Society (A324, 1558, 301-313). Hertz's theory is recovered from their formulation if the adhesion of the materials is assumed to be zero. Similar to this theory, however using different assumptions, B. V. Derjaguin, V. M. Muller and Y. P. Toporov published another theory in 1975, which came to be known as the DMT theory in the research community, which also recovered Hertz's formulations under the assumption of zero adhesion. This DMT theory proved to be rather premature and needed several revisions before it came to be accepted as another material contact theory in addition to the JKR theory. Both the DMT and the JKR theories form the basis of contact mechanics upon which all transition contact models are based and used in material parameter prediction in Nanoindentation and Atomic Force Microscopy. So Hertz's research from his days as a lecturer, preceding his great work on electromagnetism, which he himself considered with his characteristic soberness to be trivial, has come down to the age of nanotechnology.

Hertz helped establish the (which was later explained by ) when he noticed that a charged object loses its charge more readily when illuminated by ultraviolet light. In 1887, he made observations of the photoelectric effect and of the production and reception of electromagnetic (EM) waves, published in the journal . His receiver consisted of a coil with a , whereupon a spark would be seen upon detection of EM waves. He placed the apparatus in a darkened box in order to see the spark better; he observed, however, that the maximum spark length was reduced when in the box. A glass panel placed between the source of EM waves and the receiver absorbed ultraviolet radiation that assisted the electrons in jumping across the gap. When removed, the spark length would increase. He observed no decrease in spark length when he substituted quartz for glass, as does not absorb UV radiation. Hertz concluded his months of investigation and reported the results obtained. He did not further pursue investigation of this effect, nor did he make any attempt at explaining how the observed phenomenon was brought about. Earlier in 1886, Hertz developed the Hertz antenna receiver. This is a set of terminals that is not electrically grounded for its operation. He also developed a transmitting type of , which was a center-fed driven element for transmission UHF radio waves. These antennas are the simplest practical antennas from a theoretical point of view. In 1887, Hertz experimented with radio waves in his laboratory. These actions followed Michelson's 1881 experiment (precursor to the 1887 ) which did not detect the existence of aether drift, Hertz altered the to take this view into account for electromagnetism. Hertz used a Ruhmkorff coil-driven spark gap and one meter wire pair as a radiator. Capacity spheres were present at the ends for circuit resonance adjustments. His receiver, a precursor to the dipole antenna, was a simple half-wave dipole antenna for s.

Through experimentation, he proved that transverse s can travel over some distance. This had been predicted by and . With his apparatus configuration, the electric and magnetic fields would radiate away from the wires as traverse waves. Hertz had positioned the oscillator about 12 meters from a reflecting plate to produce s. Each wave was about four s. Using the ring detector, he recorded how the magnitude and wave's component direction vary. Hertz measured Maxwell's waves and demonstrated that the velocity of radio waves was equal to the velocity of light. The and polarity was also measured by Hertz. (Hertz, 1887, 1888).

The was first described by Hertz as a type of wave-front propagation through various media. His experiments expanded the field of electromagnetic transmission and his apparatus was developed further by others in the . Hertz also found that radio waves could be transmitted through different types of materials, and were reflected by others, leading in the distant future to .

Hertz did not realise the practical importance of his experiments. He stated that, : "It's of no use whatsoever" [...] " this is just an experiment that proves Maestro Maxwell was right - we just have these mysterious electromagnetic waves that we cannot see with the naked eye. But they are there."

In 1892, Hertz began experimenting and demonstrated that cathode rays could penetrate very thin metal foil (such as ). , a student of Heinrich Hertz, further researched this "ray effect". He developed a version of the cathode tube and studied the penetration by X-rays of various materials. Philipp Lenard, though, did not realize that he was producing X-rays. formulated mathematical equations for X-rays. He postulated a dispersion theory before Röntgen made his discovery and announcement. It was formed on the basis of the electromagnetic theory of light ("Wiedmann's Annalen", Vol. XLVIII). However, he did not work with actual X-rays.

In 1892, an infection was diagnosed (after a bout of severe s) and Hertz underwent some operations to correct the illness. He died of at the age of 36 in , Germany in 1894.

His wife, Elizabeth Hertz (maiden name: Elizabeth Doll) did not marry again. Heinrich Hertz left two daughters, Joanna and Mathilde. Subsequently, all three women left Germany in the 1930s to England, after the rise of . Charles Susskind interviewed Mathilde Hertz in the 1960s and he later published a book on Heinrich Hertz. Heinrich Hertz's daughters never married and so he does not have any descendants, according to the book by Susskind.

His nephew was a winner, and Gustav's son invented .

The SI unit "" (Hz) was established in his honor by the IEC in 1930 for , a measurement of the number of times that a repeated event occurs per unit of time (also called "cycles per sec" (cps)). It was adopted by the CGPM (Conférence générale des poids et mesures) in 1964.

In 1969 (), there was cast a . The Heinrich Hertz Medal, established in 1987, is "for outstanding achievements in Hertzian waves " [...] " presented annually to an individual for achievements which are theoretical or experimental in nature".

A crater that lies on the far side of the , just behind the eastern limb, is named in his honor. The Hertz market for radioelectronics products in , Russia, is named after him. The radio telecommunication tower in is named after the city's famous son.

Although Hertz would not have considered himself Jewish, his "Jewish" portrait was removed by the s from its prominent position of honor in Hamburg's City Hall ("Rathaus") because of his partly " ancestry." Hertz was a Lutheran; and although his father’s family had been Jewish,

Hertz was honored by Japan with the . [L'Harmattan: [http://www.editions-harmattan.fr/index.asp?navig=catalogue&obj=article&no=8245 List of recipients of Japanese Order of the Sacred Treasure (in French)] ]