Mireuksa was the largest Buddhist temple in the ancient Korean kingdom of Baekje. The temple was established in 602, by King Mu and is located 36.012083 N, 127.031028 E. This place depends nowadays from Iksan City (Iksan-si, Chollabuk-do, South Korea). The site was excavated in 1980, disclosing many hitherto unknown facts about Baekje architecture. The stone pagoda at Mireuksa is one of two extant Baekje pagodas. It is also the largest as well as being among the oldest of all Korean pagodas.

The legend of the creation of Miruke-sa is told in the Samguk Yusa.[1] King Mu and his queen were said to have seen a vision of the Maitreya Buddha at a pond on Mount Yonghwasan. The King promptly had the pond drained to establish the Mireuksa temple complex. The nine-storey wooden pagoda that once stood in the center of the complex is said to have been the work of Baekje master craftsman Abiji.

Designated South Korean Historic Site No. 150, Mireuksa has been partially restored and now includes a museum.

The complex included a central wooden pagoda flanked by two stone pagodas. A causeway seems to have led to the outer entrance of the walled complex. Miruksa temple had a unique arrangement of three pagodas erected in a straight line going from east to west, each with a hall to its north. Each pagoda and hall appear to have been surrounded by covered corridors, giving the appearance of three separate temples of a style known as "one Hall-one Pagoda."

The pagoda at the center was found to have been made of wood, while the other two were made of stone. The sites of a large main hall and a middle gate were unearthed to the north and south of the wooden pagoda.

The stone pagoda at Mireuksa (Mireuksa jiseoktap) was designated as a national treasure of Korea on December 20, 1962 and is the oldest and largest stone pagoda that has survived into modern times. This pagoda was the western pagoda. It is believed to have been built during the reign of King Mu who ruled from 600 to 640 CE. The pagoda is architecturally significant because it shows how the Baekje adapted their knowledge of woodworking to stone. An example of wood pagoda building techniques being adapted to stone is the fact that the base of the pagoda is low and only one storey, like a wood pagoda. From this stone pagoda, scholars can glean wood working techniques, which is especially useful because many Korean wood pagodas have not survived the ravages of time and war. Currently, the pagoda has six floors. However, scholars are uncertain of how many storeys the pagoda would have actually reached. Each side of the first story is divided into three sections, and the middle section contains a door which leads into the pagoda. Walking into the center of pagoda, one can observe a massive central pillar. There are also corner pillars and stone supports which mimic wooden support pillars. The corners of the roof of the pagoda were slightly raised up and each progressive storey was smaller than the one that preceded it. 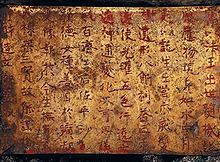 This gold plate was in the west pagoda

During excavations in January 2009, a gold plate was evacuated from the west pagoda. The plate had inscriptions in Classical Chinese on both sides, describing when and why Mireuksa temple was built. Etched into gold, the letters were inlaid with red paint, or juchil (주칠; 朱漆), which was a technique reserved for important items or works of art.

The inscription, in the original Chinese, reads:

Roughly translated into English, this becomes,

"Coming to think of this, the Buddha (法王) 'came to this world in synchronisation with and response to the will of the many disciples of Buddhism, and this is like the moon shining in water. Thus the Buddha was born into a palace and achieved Nirvana under a sal tree, leaving behind eight pieces of sarira, benefiting three thousand worlds. So surely, if the sarira, which shines in five colours, were to be turned seven times in respectful rite, the resultant divine transformation would be indescribable.
"Our Queen of Baekje, as the daughter of Jwapyeong (佐平) Sataek Jeokdeok (沙乇積德), planted benevolence through the ages, and with the karma she has received in her present life, she educated the people. She, being a great supporter of the Buddha's teachings, established temples with her wealth and received this sarira on the twenty-ninth day of the first month of the Gihae year (639 AD).
"We pray, through the charity of ages and founding upon this act of benevolence, that the longevity of His Imperial Majesty (King Mu; 大王陛下) should stand firm like the mountains and that his reign should be eternal with the heavens and the earth. We pray for the spread of the Righteous Way (正法) above, and the flourishing of all people (蒼生) below.
"We pray again that the body and heart of the Queen become like a water-mirror, ever reflecting Dharma. Let her precious body never perish as with the skies, and give her happiness unto many generations, and let all Buddhist followers achieve Enlightenment."

Also surviving at Mireuksa are flagpole supports of the temple site (Mireuksa Jidang Ganjiju). These two massive stones are set 90 centimeters apart. During special celebrations, a flagpole would sit and be supported by the two stone pillars. There were three holes for flags per pillar. The first pair of holes were square while the other two pairs were round. The base of the flagpoles has not survived. The undecorated nature of the pole, save for horizontal stripes carved on the exterior of the two poles suggests that the poles were created during the Unified Silla period.

In 1910 only a part of the west pagoda (South Korean National Treasure No. 11) was still standing. In 1914, the Japanese government supported it with a concrete backing. In the late twentieth century, Korean archaeologists conducted extensive excavations, laying the foundation for a partial reconstruction and the interpretive center. The west stone pagoda's concrete support has been removed beginning in 1999, and the entire structure was dismantled. It is undergoing restoration, expected to be completed in 2009.

Among the many finds at the temple complex have been stone lanterns and the foundation stones for the columns and terraces on which the temple structure stood. Private houses were simple structures with wooden floors. One record indicates that these houses were reached by ladders. Archaeologists excavating the Mireuksa and Imgangsa temple sites have exhumed tall foundation stones on which wooden floors would have rested. It would appear that this feature was adapted from private houses. The raised floor and heating system later became a characteristic structure of the Korean house.