OT-64 SKOT
This article is about OT-64 SKOT. For SKOT, see Skot (disambiguation).

OT-64 was intended to replace the halftrack OT-810, which was nearly identical to the German SdKfz 251 from World War II. The first prototype was built in 1959. In 1961 the first sample series were built and starting from October 1963 the vehicles were produced in Lublin, Poland by Fabryka Samochodów Ciężarowych. Czechoslovakia supplied the driveline components, i.e. the engine, transmission and axles.

The first production vehicles were delivered in 1964 to both the Polish Army and Czechoslovak Army and many are still in use today. Both Polish and Czech units are gradually replaced by newer vehicles. Czech units are scheduled to be replaced between 2007 and 2012.

The OT-64 was the answer to the Soviet BTR-60. Contrary to this the OT-64 used a diesel set in place of a petrol engine. That diminished the danger of fire and at the same time increased the range. The main advantage in relation to the Russian counterpart was the full-armored interior. The entrance is at the rear of the vehicle via twin doors. The OT-64 was air-transportable and amphibious. For the amphibious drive the vehicle used two propellers installed at the back. The OT-64 had an NBC protection facility and night-vision equipment. It also has central inflation for all wheels which can be controlled by driver during a drive.

Several variants were built. Some OT-64 were re-equipped for air defense or built as tank hunters. The latter used the AT-3 Sagger missile as a weapon.

OT-64 SKOT entered service with Polish and Czechoslovak armies in 1963.It was produced until early 1970s. It still is in service with Poland, Czech Republic and Slovakia. OT-64 SKOT was also exported to eleven different countries (Algeria, Cambodia, India, Iraq, Libya, Morocco, Pakistan, Sierra Leone, Sudan, Syria, Uganda and Uruguay). A total number of vehicles produced for the Polish Army, the Czechoslovak Army and for export is 4,500.[1] 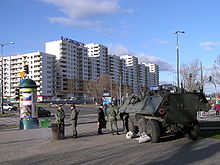 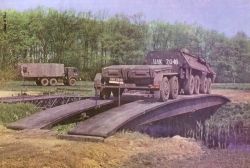 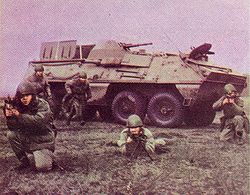 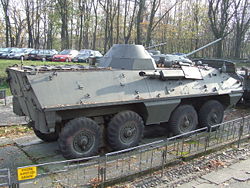 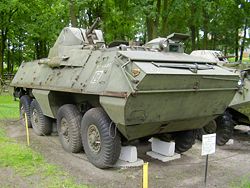 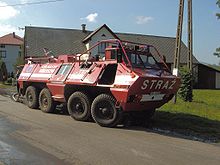