Charlton "The Friendly River Town", is a town in Victoria, Australia. It is a small agricultural community straddling the Avoca River, located at the junction of the Calder Highway (A79) and Borung Highway (C239) and positioned in the last of the foothills of the Great Dividing Range. Its location, almost halfway between Melbourne and Mildura, makes Charlton a popular stop along the way for tourists.

The original inhabitants of the region were the Jaara Aborigines. After extensive travels throughout the region by Major Thomas Mitchell, settlement by Europeans occurred in 1848 when Robert Cay and William Kaye established a station and named the region after a town in Greenwich, England. Unlike many other towns in the region, Charlton was not established as a result of gold mining, but for pastoral purposes and the proximity to a permanent water supply (the Avoca River). The original town was named Charlton East due to its location on the eastern banks of the Avoca River, and the fact that another town in the Victoria was named Charlton (renamed Chute in 1879). The Charlton East Post Office opened on December 21, 1876 (renamed Charlton in 1879) replacing an earlier (1854) office nearby named Yowen Hill.[2]

The first bridge to cross the river was erected in 1867 by James Paterson, allowing for expansion on both sides of the river. Throughout the history of Charlton, the Avoca River has been known for its spontaneous flooding after heavy rain showers, resulting in many floods that often surrounded the town or on rare occasions flooded the town. Levy banks were constructed to their present levels in the 1950s, however parts of the town were flooded in September 2010. [3]

One of the town's most prominent landmarks is the former hotel, the "Vale of Avoca", which was built on the site of an early bark hut inn by James & Elizabeth Egan in 1879. Built on a reef of stone, Mrs Egan named the building as being in the 'vale' or valley of the nearby Avoca River (Source: The Vale of Avoca official website [1]). It was delicensed as a hotel in 1942, restored in the 1990s and currently operates as a Bed and Breakfast. 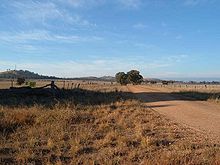 Charlton is the second largest town in the Shire of Buloke. At the 2001 census, Charlton had a population of 1,072.[1] Government department downsizing in addition to regional economic decline led to the largest percentage decline in population within Victoria between the mid 1980's and the mid 1990's with an estimated 18.3% loss in population (Source: Australian Bureau of Statistics [2]). Recent agricultural developments (such as the AWB Limited facilities), a sharp increase in house prices within larger urban areas, in addition to economic recovery, have resulted in a shift towards stabilisation and subsequent increase in Population.

The economic backbone of Charlton exists almost entirely in agriculture and services. Massive silos dominate the skyline, evidence of the town's rich history in various grains including wheat, oats and barley. Sheep and cattle farming are also prolific with the largest beef feedlot in the state, situated in Yeungroon just south of the town. Recent additions to the region, including an olive farm and winery have diversified the town's agricultural applications.

Major employers in the Charlton area are:

Location of Charlton in Victoria (red)

Charlton has various public transport connections to Melbourne, one being a V/Line coach service serving the town (and others) to Melbourne. Charlton used to have its own railway station on the Kulwin line, although a bare platform remains and no passenger services operate on the line. The line only carries wheat trains.

Charlton's central location to the North Central region has resulted in the town being the beneficiary of considerable services not typically associated with such small localities. 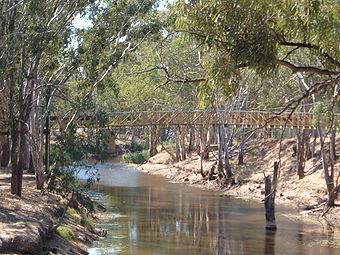 New footbridge over the Avoca River in the centre of Charlton