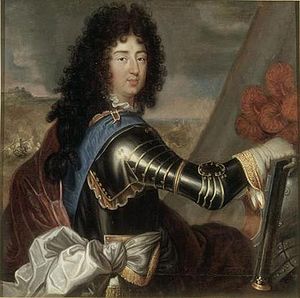 Michel Corneille the Elder, Philippe I, Duke of Orléans and brother of Louis XIV

Corneille was born in Orléans. He was one of many who studied with the celebrated master Simon Vouet, who exerted a despotic influence over the French School, and impressed his artistic personality so strongly on all his pupils. Corneille devoted himself to historical paintings, and was one of the twelve original members of the Royal Academy at its foundation in 1648. He became its rector in 1656. He was an excellent colorist—in this more Venetian than French—and his early style resembled that of Simon Vouet; later his work had all the merits and all the faults of the post-Raphaelite, or decadent, "sweet", school of Italian art, showing the far-reaching influence of the Carracci. He was long employed in the decoration of churches in Paris, his masterpiece being the celebrated "St. Paul and St. Barnabas at Lystra", painted for the Cathedral of Notre-Dame. His etched and engraved work differed very little from that of the Carracci and of his two sons. It was chiefly reproductive. Notable examples are the "Murder of the Innocents", after Raphael, and the "Virgin Suckling the Infant Jesus", after Lodovico Carracci. He died in Paris in 1664.