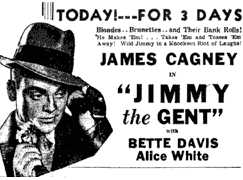 "Jimmy the Gent" is a 1934 American comedy- directed by and starring and . The by was based on "The Heir Chaser" by and Laird Doyle.

Prior to its release, the film was titled "Blondes and Bonds" and then "Heir Chaser". [ [http://www.tcm.com/tcmdb/title/title.jsp?stid=242 "Jimmy the Gent" at Turner Classic Movies] ] It was the first pairing of Cagney and Davis, who would reunite for "" seven years later.

The farcical plot of the release focuses on the unscrupulous Jimmy Corrigan (Cagney), who runs an agency that searches for heirs of those who have died without leaving a will and often provides phony claimants in order to collect his fee. When his former girlfriend Joan Martin (Davis), who left him to due his lack of ethics, accepts a position at the allegedly legitimate firm owned by Charles Wallingham (), Corrigan investigates Wallingham's background and discovers his rival is even more duplicitous than he is. He exposes him for the phony he is and promises to go straight if Joan will come back to him.