The United States Air Force Stability and Control Digital DATCOM is a computer program that implements the methods contained in the USAF Stability and Control DATCOM to calculate the static stability, control and dynamic derivative characteristics of fixed-wing aircraft. Digital DATCOM requires an input file containing a geometric description of an aircraft, and outputs its corresponding dimensionless stability derivatives according to the specified flight conditions. The values obtained can be used to calculate meaningful aspects of flight dynamics.

In February 1976, work commenced to automate the methods contained in the USAF Stability and Control DATCOM, specifically those contained in sections 4, 5, 6 and 7. The work was performed by the McDonnell Douglas Corporation under contract with the United States Air Force in conjunction with engineers at the Air Force Flight Dynamics Laboratory in Wright-Patterson Air Force Base. Implementation of the Digital DATCOM concluded in November 1978.

The program is written in FORTRAN IV and has since been updated; however, the core of the program remains the same.

A report was published, separated into three volumes, which explains the use of Digital DATCOM. The report consists of

Section 3 of the USAF Digital DATCOM Manual Volume I defines the inputs available for modeling an aircraft. The inputs are categorized by namelists to facilitate reading the file into FORTRAN.

The FLTCON Namelist describes the flight conditions for the case. A maximum of 400 Mach-altitude combinations can be run at once, with up to 20 angles of attack for each combination. The user can specify whether the Mach number and altitude varies together, the Mach number varies at a constant altitude, or the altitude varies at a constant Mach number. Both subsonic and supersonic analysis can be run in Digital DATCOM.

The OPTINS Namelist defines the reference parameters for the aircraft. The theoretical wing area, mean aerodynamic chord, and wing span are input along with a parameter defining the surface roughness of the aircraft.

The SYNTHS Namelist allows the user to define the positions of the center of gravity and apexes of the wings. The X- and Z- coordinates are needed for the wing, horizontal tail, and vertical tail in order for the aircraft to be synthesized correctly. DATCOM does not require that the origin for the aircraft has to be the nose of the aircraft; any arbitrary point will do, but all of the dimensions need to be referenced from that point. Incidence angles can also be added to the wing and horizontal tail.

The BODY Namelist defines the shape of the body. Digital DATCOM assumes an axisymmetrical shape for the body. Up to 20 stations can be specified with the fuselage half-width, upper coordinate and lower coordinate being defined at each station. For supersonic analysis, additional parameters can be input.

The WGPLNF, HTPLNF and VTPLNF Namelists define the wing, horizontal tail and vertical tail, respectively. The basic parameters such as root chord, tip chord, half-span, twist, dihedral and sweep are input. Digital DATCOM also accepts wing planforms which change geometry along the span such as the F4 Phantom II which had 15 degrees of outboard dihedral.

Canards can also be analyzed in Digital DATCOM. The canard must be specified as the forward lifting surface (i.e. wing) and the wing as the aft lift surface.

Using the SYMFLP and ASYFLP Namelists, flaps, elevators, and ailerons can be defined. Digital DATCOM allows a multitude of flap types including plain, single-slotted, and fowler flaps. Up to 9 flap deflections can be analyzed at each Mach-altitude combination. Unfortunately, the rudder is not implemented in Digital DATCOM.

All dimensions are taken in feet and degrees unless specified otherwise. Digital DATCOM provides commands for outputting the dynamic derivatives (DAMP) as well as the stability coefficients of each components (BUILD).

Digital DATCOM produces a copious amount of data for the relatively small amount of inputs it requires. By default, only the data for the aircraft is output, but additional configurations can be output:

For each configuration, stability coefficients and derivatives are output at each angle of attack specified. The details of this output are defined in Section 6 of the USAF Digital DATCOM Manual Volume I. The basic output includes:

When compared with modern methods of computational fluid dynamics, Digital DATCOM may seem antiquated. However, in its day, the program was an advanced estimation tool, and certainly much faster than plowing through pages and pages of engineering texts. Digital DATCOM is no longer supported by the USAF and is now public domain software.

Inlets, external stores, and other protuberances cannot be input because Digital DATCOM analyzes the fuselage as a body of revolution. The simplification affects the coefficient of drag for the aircraft.

Dynamic derivatives are not output for aircraft that have wings that are not straight-tapered or have leading edge extensions. This problem can be overcome by using experimental data for the wing-body (using non-straight tapered wing).

Digital DATCOM cannot analyze three lifting surfaces at once, such as a canard-wing-horizontal tail configuration. This problem can be addressed by superposition of lifting surfaces through the experimental input option.

There are intentions among those that use this package to improve the overall package, through an easier user interface, as well as more comprehensive output data.

Digital DATCOM has been resurrected by Bill Galbraith of Holy Cows, Inc. and improved. While the original DIGDAT program has been left relatively untouched, there has been a new front-end created that will allow the user to name the input file with something more significant than FOR005.DAT. The new input file format allows the user to place comments in the input file. There have also been hooks placed in the DIGDAT that allow for alternate outputs in addition to the original output format, which is 132 columns wide and slightly user abusive if you intend to import the data into another application. There is a graphical representation of the aircraft output in AC3D, as well as data table output in XML for the JSBSim and FlightGear projects, as well as a free-format LFI (Linear Function Interpolation) data table file.

Holy Cows has packaged the Digital DATCOM program DIGDAT, with the described improvements, into a package called DATCOM+. Along with the DIGDAT program, there are viewers for the AC3D, XML, and LFI format output files. Data tables can easily be output to the screen or to PNG files for inclusion into reports. The source code is not available from Holy Cows, Inc., but they provide executables for Windows, Cygwin, and Linux. 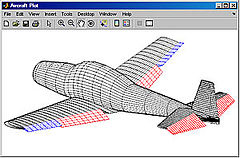 Aerospace Toolbox includes a function for importing output files from Digital DATCOM into MATLAB. This function lets you collect aerodynamic coefficients from static and dynamic analyses and transfer them into MATLAB as a cell array of structures, with each structure containing information about a Digital DATCOM output file.

OpenDatcom is an open-source GUI for the Digital DATCOM created and hosted by the OpenAE [1] community. OpenDatcom incorporates all the basic (non-experimental) functionality supported by the Digital DATCOM while providing real-time input error and bounds checking. An alpha version of the program was released November 1st, 2009 to the general public, and OpenDatcom remains under continuous development.