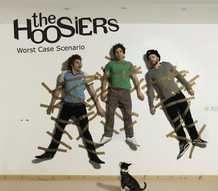 "Worst Case Scenario" is the third single by the English indie band from their 2007 album "". It has been admitted by lead man Irwin on the bands website that it is one of the bands favourite songs.

The song received its first airplay on Radio 1 and the single was released .

The video shows the band playing in a dark wooden cabin where things aren't as they seem.The song is about being in love with being miserable. [cite web|url=http://www.sonybmgmusic.co.uk/releases/645/|title= Sony BMG - Song Context]