Magnolia Cemetery is a city cemetery located in Mobile, Alabama, United States. The cemetery is situated on 120 acres (49 ha) and was established in 1836.[3] From that time onward it served as Mobile's primary burial site during the 19th century.[3] It is the final resting place for many of Mobile's 19th and early 20th century citizens. The cemetery is roughly bounded by Frye Street to the north, Gayle Street to the east, and Ann Street to the west.[4] Virginia Street originally formed the southern border before the cemetery was expanded and now cuts east-west through the center of the cemetery.[4] Magnolia contains more than 80,000 burials and remains an active, though very limited, burial site today.[3][5]

Magnolia Cemetery was established by municipal ordinance on an initial 36 acres (15 ha) outside the city limits in 1836 as Mobile's New Burial Ground.[3] The cemetery grew to its present size with the addition of the numerous new sections.[3]

The Jewish Rest section, also known as the Old Hebrew Burial Ground, was deeded to Congregation Sha'arai Shomayim, the oldest Reform Jewish congregation in the state of Alabama, by the City of Mobile on 22 June 1841.[3] Jewish Rest is the oldest Jewish burial ground in Alabama. The Jewish Rest section was full after only a few decades and led to the establishment of two additional Jewish cemeteries in Mobile, the Sha'arai Shomayim Cemetery and the Ahavas Chesed Cemetery for the Conservative Jewish congregation.[4] 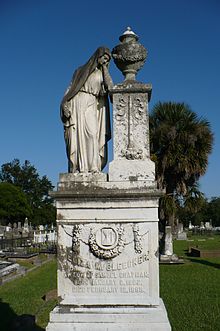 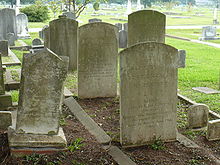 A portion of the Jewish Rest section.

In 1846 the city began to grant free burial plots within the cemetery to civic, labor, and religious organizations.[6] The Coal Handlers Union, Colored Benevolent Institution Number One, Cotton Weighers Society, Draymens Relief Society, Homeless Seamen, Independent Ladies Mill and Timber Association, and the Protestant Orphan Asylum Society were among those organizations to take advantage of this policy until it was ended in 1873.[6]

The Confederate Rest section was added on 25 November 1861 for Confederate soldiers.[7] It was initially called Soldiers Rest.[7] The Mobile National Cemetery annex was established immediately after the war, on 11 May 1866, when the city donated 3 acres (1.2 ha) to the United States government for use as a National Cemetery.[8]

The cemetery as a whole would be renamed Magnolia Cemetery on 15 January 1867.[3] On 20 August 1868 the 7 acres (2.8 ha) Goldsmith and Frohlichstein section was added to the cemetery adjacent to Jewish Rest.[9] The elevated and highly desirable plots in this section eventually became the resting place for both Jews and Gentiles with some of the more elaborate sculptures and mausolea in the entire cemetery.[9] The cemetery was enclosed with a fence in 1883 and 1913 saw the addition of a set of monumental gates at the George Street entrance.[9] Small additions continued to be made to the cemetery into the 1920s, adjoining the earlier Goldsmith and Frohlichstein section.[9]

With the expansion of Mobile and the establishment of large private cemeteries in the first half of the 20th century, Magnolia Cemetery began to decline.[9] The Mobile National Cemetery was closed to burial in 1962 due to it being at capacity, like most of the cemetery.[10] By 1970 nearly 60% of the cemetery was abandoned and it had become extremely overgrown.[10] In 1984 the Historic Mobile Preservation Society formed the Friends of Magnolia Cemetery as a non-profit corporation. The goals of the new organization included the establishment of perpetual care for the plots, cleaning up the cemetery and improving the existing plantings, improving maintenance, restoring historic monuments and ironwork, hiring of a superintendent for day to day operations, and surrounding the site with a contemporary iron fence conceived and designed by local architects Arch Winter and Thomas Karwinski.[10] The efforts by the Friends of Magnolia Cemetery led to the cemetery being placed on the National Register of Historic Places in 1986.[10]

In 1997 local veterans requested that the Mobile National Cemetery section be reopened to burial with an expansion into the last city owned piece of property at the southeast corner of Ann and Virginia Streets.[10] Upon investigation with ground-penetrating radar it was discovered that the proposed area of expansion was filled with over 4000 graves, most likely those of African Americans dating to the middle of the 19th century, making any further expansion impossible.[10] 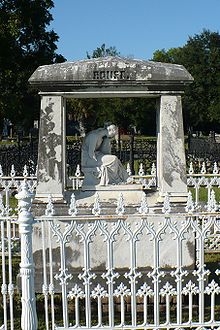 The Pomeroy family mausoleum is one of two cast iron over brick mausoleums in the cemetery.[5] The Rouse monument is a Neoclassical style monument with a classically robed mourning woman placed beneath a low profiled gable supported at the four corners by columns.[5] The Confederate Rest section of the cemetery contains 1100 war dead and many large, elaborate monuments and includes an obelisk commemorating the men who died on the Confederate submarine H.L. Hunley.[5] The Jewish Cemetery contains many simple styles with Hebrew inscriptions, in addition to some of the more elaborate plots within the cemetery.[5] The Caldwell mausoleum is an example of a Gothic Revival style mausoleum. It contains a lifesize interior angel.[5] The Wilson mausoleum, by contrast, is in an example of Egyptian Revival style and features an interior wall with stained glass.[5] The LeBlanc memorial is dedicated to two sisters who died in infancy and whose grandmother commissioned the small Neo-Renaissance statuary of two putti leaning together over a stone marker. It is one the most photographed markers in the cemetery.[5] The Bellingrath-Morse monument is a classical semicircular Doric colonnade and is one of the tallest monuments within the grounds.[5] The National Cemetery annex includes a Second Empire-style gatehouse and a brick stable built in the 1880s.[4] This annex contains over 5000 burials and a monument for the 76th Illinois Volunteer Infantry Regiment.[11] The monument was erected in 1892 by the Union survivors of the Battle of Fort Blakely.[11] The National Cemetery annex also contains the graves of 13 Apaches who were held as prisoners nearby between 1887 and 1894 by the Federal government.[5][11] 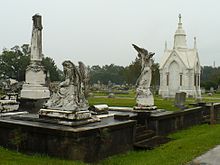 The life-sized angels of the Crowley plot with the Caldwell Mausoleum in the background. 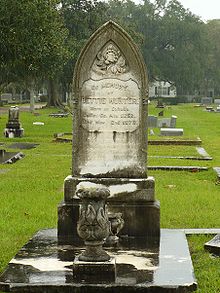 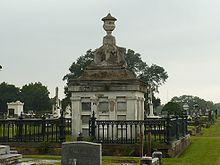