The Mongolian Stock Exchange (MSE) (Mongolian: Монголын Хөрөнгийн Бирж/Mongolyn Khöröngiin Birj), located in Ulan Bator, is Mongolia's sole stock exchange.[1] It was established in January 1991 by the decree of the Mongolian Government to privatize state-owned assets[2], as of 2010[update] it was the world’s best-performing stock market after a run-up of 121 per cent in 12 months.[3] It is regulated by the Financial Regulatory Commission of Mongolia.[4] 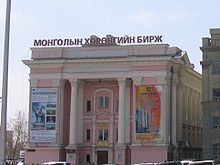 Role in privatisation of state assets

The Mongolian Stock Exchange was established in 1991 as a vehicle to implement the government's plan for privatisation of large state-owned enterprises. In an attempt to ensure an equitable distribution of assets, the Mongolian government chose to instantiate a voucher-based scheme; one blue voucher worth MNT7,000 was issued to every citizen born before 31 May 1991 for the purchase of shares in large enterprises, and a nation-wide network of 29 brokerage houses was established to take their orders.[6][7] Red vouchers worth MNT3,000 were also issued for the purchase of the assets of small enterprises which would not be listed on the exchange; unlike the blue vouchers, these could be traded in secondary markets.[8] Initially, stock exchange officials hoped to privatise 80% of state assets, but, on 7 June 1991, Government Resolution No. 170 announced that the state would retain a stake of 50% in some large enterprises; mining, energy, transportation, communications, and water supply companies were excluded from the privatisation scheme entirely.[9][10]

Auctions officially began on 7 February 1992; shares in three companies were auctioned off. The first day's turnover was 16,000 shares, valued at US$15,000; that grew by over twelve times to 200,000 shares in March. Auctions continued to be held weekly; regional brokers collected vouchers and share orders from individuals, and submitted bids through their floor traders in Ulan Bator. Communication was often accomplished by modem. Trading hours were restricted to two hours on one day per week, expanding to two five-hour days per week in July; the thirty exchange officials used the remainder of their working time to prepare infrastructure and legal recommendations for trading in the secondary market.[9][10] By October, 121 enterprises had been floated on the exchange.[11]

Mongolia soon boasted the world's highest rate of share ownership, as more and more people redeemed their vouchers for shares.[12] Family members were permitted to transfer their vouchers to each other, so not everyone became a stockholder, but the peak number of shareholders was estimated at one million, or 43% of the population at the time.[13] In the end, a total of 475 companies worth MNT17.33 billion were privatised by auctions and listed on the Mongolian Stock Exchange, including MNT5.04 billion worth of manufacturing companies, MNT4.09 billion of agricultural companies, MNT1.27 billion of construction companies, MNT1.25 billion of state farms, MNT580 million of trading companies, MNT520 million of transport companies, and MNT280 million of companies in other sectors.[8] Some sources suggest that illegal trading in vouchers occurred in advance of the privatisations; however, statistics from the exchange itself show that the number of shareholders each enterprise initially emerged with corresponded roughly to the number of shareholders one would expect if each shareholder had spent all his vouchers to purchase shares in a single enterprise. This initially led to a very equitable distribution of shares; individuals found themselves unable to buy more shares, or sell the ones they already had, until the government passed a new securities law.[6]

Secondary trading finally began on 28 August 1995, open to both domestic and international investors. Bids were placed on 430 out of 475 listed stocks, and trading occurred in 16 stocks; total turnover was 12,776 shares worth MNT2.2 million tugriks (US$4,850). The largest gain was in Sor, which rose by 19% from MNT580 to MNT690.[15] However, the secondary market quickly exposed the weakness of many of the newly privatised companies; share prices remained depressed throughout 1996, and the number of MSE-listed companies contracted from 475 to 402. Market capitalisation stabilised around MNT15 billion in 1997, with a daily turnover of 80,000 to 300,000 from MNT16 - 80 million. Furthermore, many small shareholders sold their shares, allowing a few domestic and foreign investors to gain majority holdings in the remaining listed companies. The total number of shareholders had shrunk to a mere 135,000 by 1997. One public offering of additional shares from an already-listed enterprise was carried out in 1996, but the regulators refused to give approval for initial public offerings by new private companies, due to the lack of regulation and experience in underwriting.[16] In 1998, the exchange moved to electronic trading. In 2000, the exchange also began to offer trading facilities for Mongolian government bonds.[12] As of December 2003, market capitalisation in local terms had expanded to MNT52 billion, which was still a mere 5% of GDP. Only 30 of the companies listed on the exchange were actively traded.[17]

Government bonds, rather than stocks, came to be the Mongolian Stock Exchange's biggest business as soon as they began being auctioned through the exchange in November 2000; previously, they had been sold directly to banks. The following year, the Barilga Corporation, a construction company, became the first to sell corporate bonds through the MSE, with a USD4.4 million issue. In 2004, bond trading accounted for 96% of total securities turnover on the exchange.[14] By that same year, the stock market had recovered somewhat as well, but retail investors remained suspicious of trading due to volatility and lack of transparency; MSE officials estimated that 80% of listed companies were majority-owned by private individuals.[12] By February 2007, trading hours had expanded to one hour on each weekday. Weekly stock turnover at 7 September 2007 was 1.8 million shares valued at MNT1.7 billion, while 50,000 government bonds traded for a total consideration of MNT4.8 billion.[18][19] Furthermore, the number of registered shareholders bounced back to 483,100, three-and-a-half times the figure a decade earlier, and nearly half the peak number seen in 1995 after privatisations had completed.[16][20] Total market capitalisation as of September 2006 was MNT97 billion (US$83 million).[21]

Although, the Mongolian Stock Exchange used to be the world's smallest stock exchange by market capitalisation in 2006,[18][21] it has become the world's best performing stock market in 2010.[22] Its market capitalization quadrupled to $2 billion in end of 2011 from 2008 and is speculated that it can get to $45 billion in five years[23].

Mongolian Stock Exchange sealed a deal with London Stock Exchange Group to modernize the MSE under an agreement to make it in level of world standard. LSE will manage and provide expertise and someone from LSE might lead the MSE[26]. This comes as there is a mining boom happening in Mongolia and need for robust, private and attractive stock exchange.

The Mongolian Stock Exchange is located in the former Children's Cinema building near Sukhbaatar Square, next to the headquarters of Mongolia Telecom and across from the Mongolian parliament's buildings. It was refurbished at a cost of US$4.5 million prior to the official start of trading; seats and screens were removed, a trading floor was created and equipped with computers, and automatic sinks were installed in the bathrooms.[7][9] The building itself is a pink-and-white neo-classical-style structure.[12] One corner of the building has been partitioned off to serve as an internet cafe.[27] Due to the color of its building, the Financial Times correspondent, Leslie Hook, defined it the pink house of equities.[28]

The current chairman, B.Bold, is the CEO of Newcom Corporation and former head of J.P.Morgan's department of Russia and commonwealth nations.