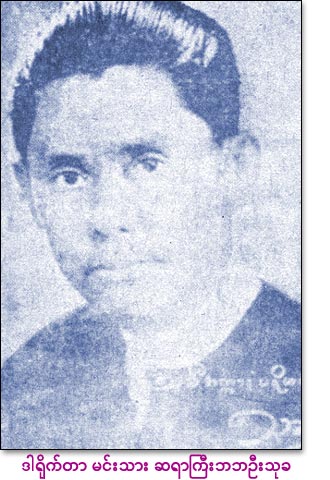 Born Thein Maung in the delta in , Thukha began writing poems as a middle school student. He became familiar with classical Burmese music at an early stage, thanks to his grandfather, a . Thukha studied at and National Schools.

Thukha began his writing career at age 19 with a short fiction work "Zabe Pwint" (Jasmin Petal) in Kawi Myetmhan magazine under the penname Sein Thein Dan. He began using the penname "Thukha"– meaning “pleasure”– when he began writing fiction for the Shwin-Pyaw-Pyaw magazine. Of his novels, "Gon-Ye-Matu-Lo-La" (Am I Not an Equal for You?) and Di-Saung-Hayman (This Winter) were the most successful. He also wrote many books on Buddhism, including , , and . Thukha wrote more than 100 novels and 200 short stories.

Thukha started his film career in 1938. His script for "" (As Much As I Love) brought widespread fame and won the respect and acknowledgment of the filmmaking community. The Myanmar Writers’ Association awarded him an honorary prize for his first directing project. During his career, he won the ’s best director award for his six of his 33 films.

Thukha was also a talented songwriter. "" (Pali: Bava ; Life's Samsara) and "" (Status) were among his most popular songs. Bawa Thanthaya compares people to travellers on a train getting on and off at every station, illustrating the cycle of death and rebirth. "Gon" poked fun at people’s devotion to money and status.

Thukha was a devout and included Buddhist morals and concepts in all his films and novels. He directed three documentaries related to for Burmese television.

Although he received success recognition for both his writing and directing work, Thukha's first priority was always writing. His former pupil and close colleague, director Maung Hnin Moe, said: “He preferred writing to other jobs. He always put the title Writer and Director before his name.” “Because he could not read or write in his old age,” Maung Hnin Moe said, “he was thinking all the time and it is a great loss that he could not transform his thoughts into a form of work such as a book or film.”

Thukha was profoundly respected for his altruistic attitude and works. He was the founder and president of the Yangon Division Funeral Service Association, which volunteers its funeral services to any family regardless of race, religion or social standing. He was also known for his efforts to rename the full moon day of Pyartho (which normally falls in January) as Mothers’ Day, as well as for his campaign for younger generations to pay more respect to their mothers.