Cultural depictions of Elizabeth I of England

Cultural depictions of Elizabeth I of England 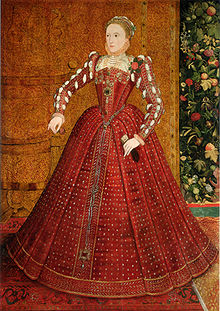 Elizabeth I of England has inspired artistic and cultural works for over four centuries. The following lists cover various media, enduring works of high art, and recent representations in popular culture, film and fiction. The entries represent portrayals that a reader has a reasonable chance of encountering rather than a complete catalogue.

There have been numerous notable portrayals of Queen Elizabeth on stage, film and television; in fact, she is the most filmed British monarch.[2][3] George MacDonald Fraser wrote "no historic figure has been represented more honestly in the cinema, or better served by her players".[4]

In the cinema, Elizabeth has been portrayed by:

On television, Elizabeth has been portrayed by: