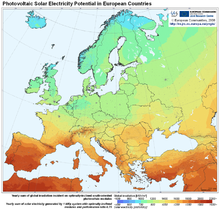 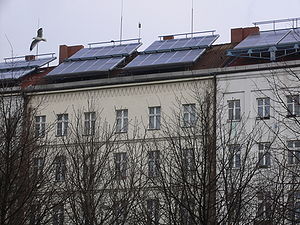 Photovoltaic cells in use on top of a building in Berlin.

The need for the strategic development of photovoltaic systems in the EU has led to the creation of PV-NET, a network that gathers representatives from all the sectors of the research and development community concerned with the photovoltaic solar energy industry (see solar cell). The network promotes communication between speakers through the organisation of specialised conferences, workshops and congresses.

This interaction has led to the editing of a waybill, finished in 2003 with the aim of providing a solid basis for EU leaders and European citizens to base their decisions and policy making and in order to help reach the objective set by the European Commission to multiply the use of photovoltaic systems by thirty times by 2010. In 2002, the world production of photovoltaic modules surpassed 550 MW, of which more than the 50% was produced in the EU. At the end of 2004, 79% of all European capacity was in Germany, where 794 MWp had been installed.

In 2010, Spain had the largest photovoltaic power station in the world – 60 MWp Olmedilla Photovoltaic Park, which was completed in 2008. Germany is on the top of installed capacity with 17,370 MW (almost two thirds of whole EU27 capacity) and also for installed capacity per capita with 212 W.[5]

Over the next 10 years the European solar thermal will grow on average at a rate of 15% per annum. According to the National Renewable Energy Action Plans the total solar thermal capacity in the EU will be 102 GW in 2020 (while 14 GW in 2006).[1]

In June 2009, the European Parliament and Council adopted the Directive on the promotion of the use of energy from Renewable Energy Sources (RES). For the first time, heating and cooling accounting for half of the final energy demand will be covered by a European directive promoting renewable energies. The overall renewable target is legally binding but renewable mix is free. According to the delivered national plans the highest of solar heating markets during 2010-2020 will be in Italy, Germany, France, Spain and Poland in respect to the national target in 2020 and capacity increase. Top countries per capita will be Cyprus, Greece, Austria, Italy and Belgium.[1]

In some European countries the solar thermal market is still in its infancy. Bulgaria, Denmark, Netherlands, Sweden, and United Kingdom have extremely low targets in their plans. Estonia, Finland, Latvia, and Romania have not included solar thermal in their national plans at all.[1]

Solar heating is the usage of solar energy to provide space or water heating. Worldwide the use was 88 GWthermal in 2005. Growth potential is enormous. The EU have been second after China in the installations. If all EU countries had used solar thermal as enthusiastically as the Austrians, the EU’s installed capacity would have been 91 GWth (130 million m2, far beyond the target of 100 million m2 by 2010, set by the White Paper in 1997. In 2005 solar heating in the EU was equivalent to more than 686,000 tons of oil. ESTIF’s minimum target is to produce solar heating equivalent to 5,600,000 tons of oil (2020). A more ambitious, but feasible, target is 73 millions tons of oil per year (2020) – a lorry row spanning 1,5 times around the globe.[8]

The European Photovoltaic Industry Association (EPIA) is the world's largest industry association devoted to the solar electricity market. The association aims to promote photovoltaics at the national, European and worldwide levels.[9]