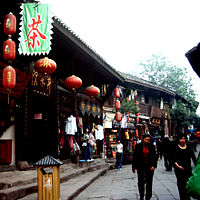 A tea house in Ciqikou 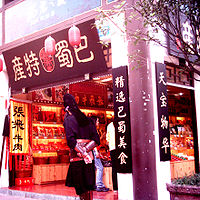 Ciqikou (Chinese: 磁器口; pinyin: Cíqìkǒu; literally "Porcelain Port") is an ancient town in the Shapingba District of Chongqing Municipality, People's Republic of China, originally called Longyinzhen (simplified Chinese: 龙隐镇; traditional Chinese: 龍隱鎮; pinyin: Lóngyǐnzhèn) was also known as Little Chongqing. According to an old Chinese proverb: "One flagstone road, and one thousand years' Ciqikou". The name of the town can be traced back to porcelain production during the Ming (1368–1644) and Qing Dynasties. Formerly a busy port located at the lower reaches of the Jialing River, a thousand years after its foundation the town remains a symbol and microcosm of old Chongqing (Jiang Zhou).

Ciqikou is located on the west bank of the Jialing River and covers an area of 1.18 square kilometres (0.46 sq mi). Three mountains, Mount Jingbi, Mount Fenghuang and Mount Ma'an lie in Ciqikou, whilst Fenghuang Quan and Qinshui Quan run across it. The geography of Ciqikou is considered to have perfect Fengshui by local people.

According to historical records, Ciqikou was first built during the reign of Emperor Zhenzong of Song (r. 998—1004). It gained prominence during the Ming Dynasty as a commercial port and market town, shipping goods both by land and water. Reaching its climax during the end of the Qing Dynasty, the town has been described poetically: in Ciqikou, as "one thousand people greet each other during day ... ten thousand lamps flicker at night".

Travelers to Chongqing and locals alike throng to Ciqikou's steep and narrow pedestrian streets. Shops sell porcelain, other handicrafts, and gifts, while restaurants and tea shops give visitors a look at what many areas of Chongqing were like before the metropolis became the vast urban agglomeration it is today. A 1,500-year-old Buddhist temple straddles the mountain in the middle of the old town.

The ancient town abounds in customs, many of which have lasted till now. These include baibazi, xingbang, family's ancestral temple, Pao Brother, temple fair, dragon dance, dragon boat race, friends of Sichuan opera, chuntai drama as well as pingshu and teahouse culture.

Chongqing is known for its wide variety of local food traditions, especially the ubiquitous, spicy "hotpot"; while Ciqikou is one of the best-known places in Chongqing. Jiaoyan Peanut, Maoxuewang, and Qianzhangpi, called the three treasures of Ciqikou, as well as Douban fish, are the most popular.

This compound is more than 120 years old. It was built by a late Qing Dynasty eunuch by the name of Zhong Yunting （zhōng yún tíng 钟云亭）,who served on the staff of the notorious Ci Xi Empress of the Qing Dynasty （cí xǐ tài hòu 慈禧太后）. Traditional Chinese architectural techniques used in both the North and the South are featured in this heritage compound.

Visitors walking into the hall and courtyard--and across the separation of time and space--of Bayu Dwellings, built of timber, stone and brick, experience an unmistakable sense of peace.

The Jian Wen Emperor of China's Ming Dynasty （jiàn wén dì 建文帝）spent the rest of his life living at this temple after he was ousted from Beijing and went into exile. The four large Chinese characters Da Xiong Bao Dian （dà xióng bǎo diàn 大雄宝殿） hanging at this temple were written by Zhao Puchu （zhào pǔ chū 赵朴初）,a famous Chinese calligrapher who served as the president of China's Buddhist Society. The main building at the temple was built 600 years ago during the Ming Dynasty and is characterized by its splendor. The whole building was constructed without using a single nail and is regarded as a miracle in China's architectural history. Buddhist believers flock to this temple to pray and undertake other Buddhist activities year in year out--particularly during China's Spring Festival.