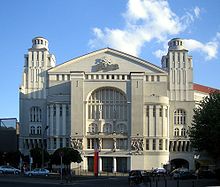 The Neues Schauspielhaus (English: New Theatre) on Nollendorfplatz in the Schöneberg district of Berlin was built in 1905 as a theatre and concert hall in the then-fashionable Art Nouveau style. From 1911 it also included a cinema.

From the beginning of World War I the theatre turned into an operetta stage until in 1927, Erwin Piscator and Tilla Durieux opened their Theater am Nollendorfplatz in the building. Piscator created time-critical performances by playwrights like Ernst Toller and Walter Mehring, with artists like Bertold Brecht, George Grosz and John Heartfield at times working with him. Piscator emigrated in 1931 and after the Nazi takeover the house again became an operetta theatre under the direction of Harald Paulsen.

While the auditorium was destroyed in World War II, the facade as well as the cinema survived and in 1951 was renamed Metropol. Since 1977 it has been used as a discothèque and became a famous music club during the 1980s heyday of West Berlin, frequented by bands like Depeche Mode, The Cross, The Human League or Front 242. For a short time in 2000 it was the location of the KitKatClub and in 2005 the architect Hans Kollhoff remodeled the interior as the Goya night club.