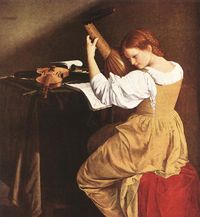 The Lute Player by Orazio Gentileschi.

Orazio Lomi Gentileschi (1563–1639) was an Italian Baroque painter, one of more important painters influenced by Caravaggio (the so-called Caravaggisti). He was the father of the painter Artemisia Gentileschi.

In the late 1570s or early 1580s Gentileschi moved to Rome, and was associated with the landscape-painter Agostino Tassi, executing the figures for the landscape backgrounds of this artist in the Palazzo Rospigliosi, and it is said in the great hall of the Quirinal Palace, although by some authorities the figures in the last-named building are ascribed to Giovanni Lanfranco. He worked also in the churches of Santa Maria Maggiore, San Nicola in Carcere, Santa Maria della Pace and San Giovanni in Laterano.

However, Gentileschi's main influence starting from the early 17th century was Caravaggio, also in Rome at the time, whose style he was one of the best followers of. Sharing with the former shadowy characteristics, he took part in several adventures in Rome's streets. In late August of 1603 Giovanni Baglione filed a suit for libel against Caravaggio, Gentileschi, Ottavio Leoni, and Filipo Trisegni in connection with some unflattering poems circulated amongst the artistic community of Rome over the preceding summer. Caravaggios testimony during the trial as recorded in court documents is one of the few insights into his thoughts about the subject of art and his contemporaries.[1] In 1612 he was again called to the Tribunal of Rome, this time to speak against Tassi, who was charged with the rape of his daughter Artemisia Gentileschi. After Caravaggio's flight from Rome, Gentileschi developed a more personal Tuscan lyricism, characterized by lighter colours and precision in detail, reminiscent of his Mannerist beginnings. After a long sojourn in the Marche, in the early 1620s Gentileschi went to Genoa, and then to Paris, at the court of Marie de Medici. 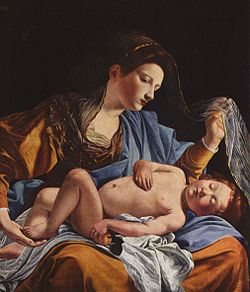 Madonna with Child by Orazio Gentileschi.

In 1626 he left France to work for Charles I of England, where he remained for the rest of his life. His works became increasingly conventional and decorative, but were appreciated by the local aristocracy for their classicism. Van Dyck included him in his portraits of a hundred illustrious men.

Gentileschi died in 1639 in London.

Gentileschi's best works are Saints Cecilia and Valerian, in the Galleria Borghese of Rome; David after the death of Goliath (c. 1610), in the Palazzo Doria, Genoa; and some works in the royal palace, Turin, noticeable for vivid and uncommon coloring. The Annunciation (1623), painted in Genoa and now in the Galleria Sabauda of Turin, is considered by several authorities his masterpiece. Its plenty of graceful details, as well as the total absence of the earlier chiaroscuro, show the lessening of Caravaggio's influence at the time.

One of his main works in England was a series of ceiling paintings in Queen's House, Greenwich, which are now in Marlborough House, London.