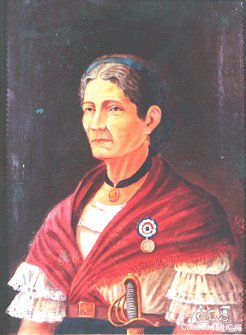 Pancha Carrasco, born Francisca Carrasco Jiménez ( – ) was 's first woman in the military. Carrasco is most famous for joining the defending forces at the in 1856 with a rifle and bullets. Became a symbol of national pride, she was later honored with a Costa Rican postage stamp, a Coast Guard vessel, and the creation of the "Pancha Carrasco Police Women's Excellence Award".

In 1816, Francisca Carrasco Jiménez was born on in , of mixed Indian, Black, and Spanish heritage, the daughter of Jose Francisco and Maria Carrasco. She was married three times, first in 1834 with Juan Solano, and the last one with Gil Zúñiga; however, none of them worked out.

In 1856 (age 40), when William Walker and his "filibusteros" invaded Costa Rica, Carrasco volunteered as a cook and a medic. She is most famous for filling her apron pockets with bullets, grabbing a rifle, and joining the defending forces at the , becoming Costa Rica's first woman in the military

Her strength and determination became a symbol of national pride, and she was honored on a Costa Rican postage stamp in 1984.