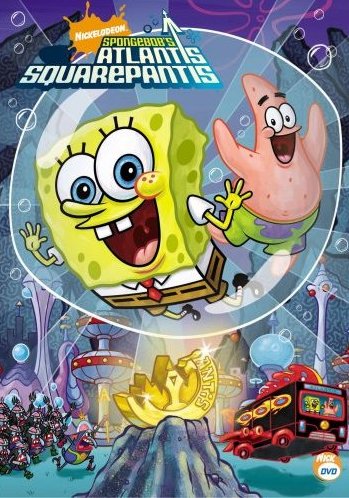 "Atlantis SquarePantis" is a TV Movie for the show . The movie first aired in the US on November 12, 2007, following a 12-hour-marathon of "SpongeBob SquarePants" episodes. A version was released the day after the show premiered, featuring the TV Movie and 6 bonus episodes: "Money Talks", "Spongebob vs. The Patty Gadget", "Slimy Dancing", "The Krusty Sponge", "Sing a Song of Patrick", and "Picture Day".

The movie begins with Patchy in a traffic jam. He thinks he will miss the next SpongeBob episode. Then, shrinks. The event reminds Patchy of the episode.

The show begins with SpongeBob blowing bubbles and Patrick taking pictures of them, causing them to pop. Patrick then destroys the camera, saying SpongeBob thinks it is the very nature of the fragile bubble. He then sings a song about bubbles, then accidentally blows a larger bubble than expected. It lifts SpongeBob and Patrick off the ground. Then, a broken coin (the Atlantean Amulet) pops the bubble. Patrick assumes the amulet belonged to SpongeBob's ancient ancestors. They take it to the museum. There, Mr. Krabs sets up his own admission booth, but soon takes it down. Patrick and SpongeBob run into Squidward, who was busy painting. Squidward thinks SpongeBob and Patrick stole the missing half of the Amulet. He soon matches it to the displayed other half of the Amulet. Then, Mr. Krabs runs into Squidward. Squidward teaches Mr. Krabs, SpongeBob and Patrick about . Sandy steps in. Sandy, Patrick, Mr. Krabs and SpongeBob convince Squidward to link the two halves together.

The magical path (a luxurious bus) is opened. The captain tells the group (with Plankton stowing away with them) to refill fuel, but he reveals the fuel as . The group sing. Patrick "empties" the fuel by singing a bad song. The bus crashes into a topiary garden in Atlantis. There, they meet Lord Royal Highness (portrayed by ). During the tour, Mr. Krabs, Sandy and Squidward get eliminated. Mr. Krabs dug for treasure, Sandy became pixelated, and Squidward posed for a painting. Meanwhile, Plankton checks out the Weaponry Room. He then chooses the right one (an shooting machine in which Plankton doesn't know.) Finally, SpongeBob and Patrick get to see the world's oldest living bubble alive, over 1 billion years old. They take a picture of it, which causes the bubble to pop. They are afraid to speak, saying they have to go back to . Then, Patrick shouts out the truth.

At the end of the movie, Lord Royal Highness is not mad at SpongeBob and Patrick for popping the bubble, saying that the one they popped was just a tourist attraction. He then shows them the "real" oldest living bubble, but once again, when Patrick takes a picture of it, it pops. Lord Royal Highness and some guards chase them when Plankton comes in and tries to destroy them with a tank he found (the ice cream tank from previously). Lord Royal Highness picks Plankton up saying that a "talking speck" would be a better replacement for the bubble. Lord Royal Highness removes the Amulet, and orders a soldier to dispose it. SpongeBob, Patrick, Sandy, Squidward and Mr. Krabs want to stay, but return home anyway, much to everyone's (except SpongeBob's) displeasure.

The following songs were featured in the movie:

"Atlantis SquarePantis" was given generally negative to mixed reviews from both critics and fans (On tv.com, this episode has a rating of 5.6 out of 10, the lowest of any Spongebob episode ever). [ [http://www.tv.com/spongebob-squarepants/atlantis-squarepantis/episode/1086743/reviews.html TV.com: Atlantis SquarePantis: Reviews] ] , a television critic for "", lambasted the movie in a review. In the review, titled "Squeezing the Life Out of SpongeBob", Shales wrote that "the funniest thing about the film is its title" and "a typical episode has about as many laughs as this inflated version does". Shales criticized the amount of musical numbers in "Atlantis SquarePantis", calling them "numbing". He concluded the review with the statement that the show was "flat" and "unimpressive". However, "Atlantis SquarePantis" recorded nine million viewers, beating every 8pm show on broadcast television that night except "".

Z to A countdown