Origin of the harp in Europe

Origin of the harp in Europe 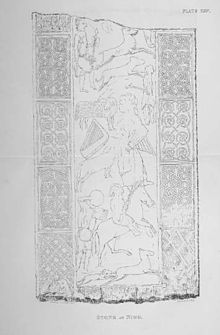 The Nigg stone 790-799A.D carving of a Pictish harp in a 19th century illustration, minus the top section. 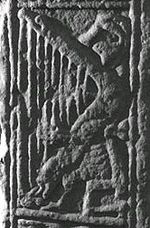 The harper on the Dupplin Cross, Scotland, circa 800 AD

The harper on the Monifeith Pictish stone, Scotland, 700-900 AD

The origins of the triangular frame harp are unclear. Triangular objects on the laps of seated figures appear in artwork of the early medieval period in Ireland, Scotland and other parts of North West Europe. This page outlines some of the scholarly controversies and disagreements on this subject.

The earliest descriptions of a European triangular framed harp i.e. harps with a fore pillar are found on carved 8th century Pictish stones.[1][2][3][4][5][6] Pictish harps were strung from horsehair. The instruments apparently spread south to the Anglo Saxons who commonly used gut strings and then west to the Gaels of the Highlands and to Ireland.[7][8][9][10] Exactly thirteen depictions of any triangular chordophone instrument from pre-11th century Europe exist and twelve of them come from Scotland.[11] Moreover, the earliest Irish word for a harp is in fact 'cruit', a word which strongly suggests a Pictish provenance for the instrument.[12] Only two quadrangular instruments occur within the Irish context on the west coast of Scotland and both carvings instruments date two hundred years after the Pictish carvings.[10] The first true representations of the Irish triangular harp do not appear till the late eleventh century in reliquary and the twelfth century on stone and the earliest harps used in Ireland were quadrangular lyres as ecclesiastical instruments,[5][10][13] One study suggests Pictish stone carvings may be copied from the Utrecht Psalter, the only other source outside Pictish Scotland to display a Triangular Chordophone instrument.[14] The Utrecht Psalter was penned between 816-835 AD.[15] While Pictish Triangular Chordophone carvings found on the Nigg Stone dates from 790-799 AD.[16] and pre-dates the document by up to thirty-five to forty years. Other Pictish sculptures predate the Utrecht Psalter, namely the harper on the Dupplin Cross c. 800 AD.

The earliest drawings of triangular-frame harps appear in the Utrecht Psalter, written and illustrated in the early 9th century from a scriptorium in Rheims.[17] Ten of the illustrations show figures holding harp-like instruments, and in six of them the forepillar is clearly shown. The Utrecht Psalter was penned between 816-835 AD.[15] and found its way to the scriptorium at Christ Church in Canterbury, England 970AD. where several copies were produced.[17] Although portraits of the biblical King David playing a stringed instrument were already a feature of European religious manuscript art, manuscripts before this time show David with a medieval lyre rather than a harp.[17]

The stone carvings attested to Ireland are all are found within a Christian context and the majority of carvings depict lyres or quadrangular ecclesiastical instruments that date from the 8th to the 12th century.[7][10][18] However lyres are physically different instruments from triangular harps and it is unlikely the characteristic medieval harp developed from them.[19] Early Irish monastic settlements prized the use of lyres within an ecclesiastical setting [20] and the instruments depicted, come in a variety of shapes and sizes and tend to be lyres rather than characteristic triangular harps.[7][7][21] Irish hymn texts of the period refer to the performance of hymns and psalms as being accompanied by a lyre and [18] such quadrangular instruments were used in religious ceremonies due to their small size from the introduction of Christianity to Ireland.[22] Gerard of Wales cites the “Cythera” Kithara of St Kevin playing by Irish abbots and bishops for chants and funeral lamentations. Such instruments were prized in Ireland well into the 12th century.[18][23]

From an Irish perspective, three distinct forms of lyre are evident; round top lyres as seen in the crosses at Ullard shows a quadrangular instrument with no forepillar,[22][24] and round topped lyres were common throughout northern Europe between the (5th-10th century) as can be seen in surviving examples namely the Sutton Hoo treasure hoard.[7] Curved arm lyres are depicted on the cross of scriptures at Clonmacnoise, the West Cross at Kells, and the Cross at Castle town County Offaly. Oblique lyres are depicted on the South Cross at Kells, the Crosses of Muirdach, and Monasterbonice.[7][25][26][27] The carving at Monasterbonice county Louth does show a type of chloroform triangular instrument, however the stone is weathered and unclear if the figure is playing a true triangular harp,[13] and others think it strongly resembles the Ullard lyre.[22] Another study argue that many such crosses from the pre-Norman period survive in Ireland, however what is striking is that there are no triangular framed harps,[26] Some early texts make the reference coir-cethar-chuir ‘four angled music' which refers to a four sided instrument.[26] Other contemporary Irish sources of the period, namely the Cotton manuscript still depict a plucked lyre correspond to the shrine of St Maelruain Gospel, the Durrow Cross lyre and the three stringed lyre carving of judgement of Solomon at Ardmore Cathedral.[7]

The first true representations of the Irish triangular harp does not appear till the late 11th century in reliquary on the St. Moedoc shrine,[7][10][13] while the Gospel of St Maelruain from the same period still traditionally depicts a lyre with three strings.[7] Other articles discuss the triangular harp was first appeared in Ireland at the start of the Anglo-Norman invasion.[7][10][18][22][28] The influx of English harpers to Ireland is also recorded in the Red Book of Ormond,[7] and the Dublin Merchant roll (c1190-1265) shows a contingent of English Anglo-Norman harpers within an Irish context, playing in the Anglo-Norman tradition.[7][29] Although, it is clear these musicians were playing a triangular English harp as seen by a sketch in the margin of the Harper Thomas Le Harpur (c1200), it is unclear if such an influx lead to a possible cross pollination between the invading Anglo-Norman and Irish harpers.[30][31]

The knowledge and designs of harps and lyres probably arrived in ancient Europe via Grecian regions from the ancient Middle-East, for example a five thousand year-old Sumerian lyre is on display in the Mesopotamian section of the British Museum.