Each in Our Own Thoughts

Each in Our Own Thoughts

Infobox Album
Name = Each in Our Own Thoughts
Type =
Artist = 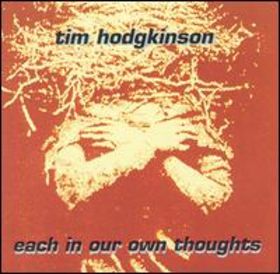 "Each in Our Own Thoughts" consists of three instrumental pieces and three songs. The music varies from to : there is a ("String Quartet 1"), two works for small ensembles ("A Hollow Miracle" and "Palimpsest"), a piece for samples and multiple horns ("From Descartes' Dreams"), a piece for -instruments ("Numinous Pools for Mental Orchestra"), and an unrecorded number from 1976 ("Hold to the Zero Burn, Imagine"). Hodgkinson composed the music for all the tracks and wrote the lyrics for "Hold to the Zero Burn, Imagine"; wrote the song texts for "A Hollow Miracle" and "Palimpsest". Hodgkinson does not perform on "String Quartet 1".

"Hold to the Zero Burn, Imagine" was originally composed by Hodgkinson for Henry Cow as "Erk Gah" in 1976 and was performed regularly by the band between 1976 and 1978. [ cite web |url=http://calyx.club.fr/bands/chrono/henrycow.html |title=Henry Cow chronology |work=The Canterbury Music Website |accessdate=2007-11-14 ] It was scheduled to be recorded in in early 1978 for their next album, but objections from some of the band members over its lyrics resulted in it being shelved. Henry Cow broke up in mid-1978 and "Erk Gah" was never recorded in the studio. [ cite web |url=http://www.ccutler.com/ccutler/bands/group03.shtml#artbears |title=Art Bears |work=Chris Cutler homepage |first=Chris, |last=Cutler |accessdate=2007-11-14 ] A 1977 Henry Cow Swedish Radio broadcast of "Erk Gah" did surface in 2008 when released it in the "".

The recording of "Hold to the Zero Burn, Imagine" in 1993 (with the original "Erk Gah" lyrics) was a Henry Cow reunion of sorts in that four of the musicians that played on this track were from the original band: Tim Hodgkinson, Chris Cutler, and .

*Tracks 1, 3, 4 and 5 recorded and mixed by at Wolf Studios,
*Track 2 recorded live at Bottolph Clayden by
*Track 6 recorded direct to DAT from -instruments by