Château-d'Œx is a municipality in the canton of Vaud in Switzerland. It is in the district of Riviera-Pays-d'Enhaut.

During the late Paleolithic and Mesolithic (9500 to at least 6000 BC) caves around Château-d'Oex served as a seasonal settlement. Bronze Age knives indicate that there was a settlement during that era as well. Many of the local names (combe = valley, joeur = forest, man= rock)and the local dialect are the only traces of a celtic settlement in the area. The lack of iron ore and the sparseness of the soil probably prevented the romanization of lowland valleys. During the Gallo-Roman era, the region may have been only sparsely populated. By the 10th Century, the Alamannic settlements had only reached Le Vanel but then spread even higher and reached the pastures in L'Etivaz in the southern part of the municipality. The valley was known as the high Gau or Ogo. The name may have come from the word for Ox or be a form of Äesch, (or ash).[2]

In the 10th Century, the Count of Gruyere conquered La Tine and the Creux de l'Enfer. Subsequently it was merged with Rossinière to form a district. The church of St. Donat was consecrated and first mentioned in 1175. The village church was under the authority of the Cluniac Priory of Rougemont, which was founded in 1080.

At the beginning of the 14th Century, the castle at La Motte was rebuilt for the Counts of Gruyere. Another stronghold probably stood on the rocky spur which was known as Château Cottier. After clearing the woods, the region was intensively farmed and produced barley, hay, hemp and cheese. In 1388 the villagers threw off the obligation to serve the nobility. Then, in 1403, against the wishes of the Count of Gruyères, the villagers joined a limited alliance with Bern.[2]

Growth during the Early Modern era

In 1555 Bern received the upper part of the county of Gruyere including Château-d'Oex. It became part of the German-speaking bailiwick of Saanen. The rights and freedoms of the villagers were now based on Bernese law and not on the Land Law of Moudon. However, the village church was still part of the parish under the collegiate church of Lausanne. Following the Protestant Reformation in 1555, the parish also included Etivaz until 1713.

Under Bernese rule, the economy experienced a strong upswing. The common land was divided and sold before the end of the 16th Century. The alpine pastures were leased to private cheese makers, who there produced Gruyere cheese. In the 18th Century, the inhabitants of the municipality sold the cheese, from the approximately 2,000 cows, at the market in Vevey. From there it went over the Col de Jaman to Marseille where it was exported to Asia and America.[2]

End of the Ancien Regime and Modern Château-d'Oex

House in the historic center of Château-d'Oex

In 1798, Château-d'Oex came to the newly formed Canton of Léman. In 1800, a fire destroyed the wooden houses on the central hill. The houses had been built in this style and on the hill to avoid property taxes. Thanks to the efforts of the Dean Philippe-Sirice Bridel enough money was raised to rebuild the houses in stone. The municipality hired masons from Savoy, carpenters from Simmental and plasterers from the lower Gruyere lands lower uplands. In 1803, the Canton of Léman was dissolved with the Act of Mediation and the municipality became part of the new canton of Vaud.[2]

In 1849, the Institute Henchoz opened as a preparatory gymnasium, which replaced the older Latin school. The primary school received a new building in 1907. Starting in 1847 a parish of the Free Church of the Canton of Vaud was established with two priests. The Catholic parish was established in 1896 and the Anglican church parish was created in 1899. Other religious communities, such as the Plymouth Brethren, established churches in the valley.[2]

In the 19th Century, the municipality suffered several several outbreaks of livestock diseases. To protect the dairy industry, non-local herds were forbidden from passing through the municipality. Cheese was no longer allowed to be carried across the mountains but was now transported on local draft horses. Due to customs taxes with the neighboring Canton of Fribourg, cheese was carried on a route over the Col de Chaude to Villeneuve (VD) and from there to the shores of Lake Geneva, without crossing the Fribourg border. The abolition of the inter-canton customs and taxes in 1848 led to the demolition of the Fribourg customs station on the main road that had linked Château-d'Oex with the grain and livestock markets. Changes in markets and improvements in animal husbandry led to more Simmental cattle being raised for meat rather than cheese production. The construction of the road over the Col des Mosses (1865–71) and the construction of a new road to Bulle (1895) eased transportation.[2] 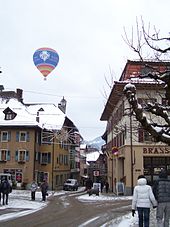 Balloon above the streets of Château-d'Oex

The hospital, which had replaced the old hospital in 1926, was remodeled in 1979 into a nursing home and district hospital. At the same time, solar heating was added to the building. The municipal administration building was built in 1912, and renovated in 1958. The Musée du Vieux Pays-d'Enhaut was built in 1922.

Until 1953 the Liberal party (PLS) and the Parti radical-démocratique suisse {PRD) were separate parties that each published their own newspaper. The PRD paper "Le Progrès", however merged in 1940 into the (PLS), "Journal de Château-d'Œx", which became in 1989 the "Journal du Pays d'Enhaut". The socialist and agrarian parties were not represented in the local parliament until 1957 when proportional representation was introduced.[2]

A power plant operated in La Chaudanne was from 1894 until about 1901. The opening of the Montreux-Oberland Bernois Railway (MOB) in 1904 made Château-d'Oex an attractive summer resort. It was particularly appreciated by English tourists. Between 1916-18 it also housed English internees during the war. Half a dozen grand hotels with tennis courts sprang up in the municipality. A tennis club was founded in 1894. Other infrastructure included the suspension bridge at Turrian (1883), a swimming pool and a campsite (1932), a cable car (1945) and the Pont du Berceau (1945). The agricultural sector has remained important, with the emphasis again shifting to cheese. In the 20th Century, winter tourism became an important additional source of income. Hot air balloons and river rafting became common in the summer, while local crafts, sawmills and gravel mining are the main branches of the industrial sector. Since 1945, the area around Pierreuse has been a protected heritage site.[2] 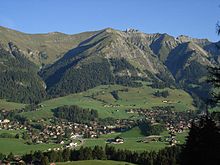 View of Château-d'Oex and the surrounding mountains

Of the built up area, housing and buildings made up 1.3% and transportation infrastructure made up 1.2%. Out of the forested land, 30.0% of the total land area is heavily forested and 3.8% is covered with orchards or small clusters of trees. Of the agricultural land, 0.1% is used for growing crops and 10.5% is pastures and 34.0% is used for alpine pastures. Of the water in the municipality, 0.4% is in lakes and 0.6% is in rivers and streams. Of the unproductive areas, 9.3% is unproductive vegetation and 6.3% is too rocky for vegetation.[3]

The municipality was part of the Pays-d'Enhaut District until it was dissolved on 31 August 2006, and Château-d'Oex became part of the new district of Riviera-Pays-d'Enhaut.[4]

The municipality is the largest in land area in the canton. It is located in the upper Saane valley. In the 14th to 18th Centuries, the seven établées of Sous le Scex, Mont, Village, Frasse, Entre deux Eaux, Monteiller and L'Etivaz merged into the municipality. It consists of the villages of Château-d'Oex, L' Etivaz, Les Moulins and Les Granges, 35 hamlets and 22 alpine herding camps.

The blazon of the municipal coat of arms is Gules, a tower embattled Or, a wall embattled of the same in the dexter, surmounted by a crane Argent[5] 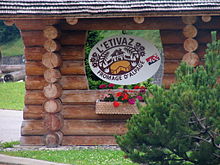 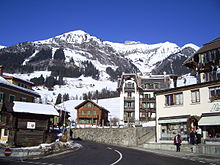 As of 2000[update], there were 1,140 people who were single and never married in the municipality. There were 1,422 married individuals, 227 widows or widowers and 160 individuals who are divorced.[8]

As of 2000[update] the average number of residents per living room was 0.53 which is less people per room than the cantonal average of 0.61 per room.[7] In this case, a room is defined as space of a housing unit of at least 4 m² (43 sq ft) as normal bedrooms, dining rooms, living rooms, kitchens and habitable cellars and attics.[9] About 48.5% of the total households were owner occupied, or in other words did not pay rent (though they may have a mortgage or a rent-to-own agreement).[10]

The historical population is given in the following chart:[2][12]

The Les Ciernes-Picat, a mesolithic shelter, is listed as a Swiss heritage site of national significance. The entire hamlet of l’Etivaz is part of the Inventory of Swiss Heritage Sites.[13] 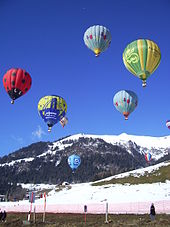 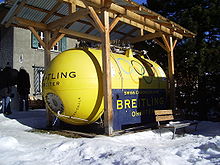 The world famous "Balloon Week" has been held each year since 1979 in the last week of January. Up to 100 balloonists gather for the festival each year. The Breitling Orbiter 3, the first hot air balloon to circumnavigate the earth, took-off from Château-d'Œx on March 1, 1999. Commemorative insignia (pins) are created for each festival and are sold as pass-tickets to the museum and sportive manifestations for the whole duration of it.

A museum dedicated to Montgolfier type ballons is located in the center of the town.

As of 2000[update], there were 92 students in Château-d'Oex who came from another municipality, while 95 residents attended schools outside the municipality.[16]

Skiing is a key activity in the area with the ski station of La Braye accessible via cable car (also open in Summer) from the heart of Château-d'Œx village. The International Hot-Air Balloon Festival in Château-d'Oex is held every year in January, since 1979.

David Niven, the British actor who played Phileas Fogg in Around the World in 80 Days (1956 film), lived much of his life in Château-d'Œx. He died at his chalet on July 29, 1983 of amyotrophic lateral sclerosis (ALS), at age 73.

Billy Kearns, the American actor, also lived much of his life in Château-d'Œx. He died on November 28, 1992 of lung cancer at age 69.