Since its founding in 1994 by Dave Dehaan, DYE Precision has grown into one of the biggest manufacturers of paintball equipment in the world. Based in San Diego, California, DYE has offices and factories in the UK, Germany, and Taiwan. Starting out just selling barrels from a garage, DYE now produces all types of high end paintball equipment including paintball markers, loaders, hoppers, protective gear, and casual clothing. Being one of the largest companies in the industry, DYE sponsors many professional paintball teams such as the LA Ironmen, Chicago Aftershock, London Nexus, Toulouse Tontons, Ecuador Evolution, Brasil Jungle Boyz, Colombia Wayout and Tampa Bay Damage.[1][2]

DYE Precision is a paintball manufacturing company that was started by former player Dave Dehaan in 1994, or as you may know him Dave Youngblood. Dave starting playing professionally at the age of 14, Dave was by far one of the youngest players in the game and was consequently given the name "Youngblood", which he is known by today.[2] To make extra money while in school, Dave made custom marker modifications. This got him involved in the industry side of the sport. In 1996, the founder of JT USA, John Gregory, gave Dehaan a job helping with equipment at tournaments. Eventually, Dehaan became the head of the paintball division at the company. Difficulties in the company and rumors of it being sold caused Dehaan to pursue a career in law-enforcement. This did not stop Dave from making custom paintball equipment in his spare time, barrels in particular. As popularity of his equipment grew, he manufactured his first round of 100 barrels which he called the "Boomstick" which sold out in two weeks time. The success of these barrels paved the way for the founding of DYE, Dave Youngblood Enterprises.[3]

Since the birth of the Boomstick, DYE has made several products that have reset the standards for paintballing and have improved the sport as a whole. In 2003, DYE released its version of the Matrix, a spool valve design electropneumatic paintball marker. The Dye Matrix, also known as the LCD Matrix, was a top-of-the-line high-end marker that became very popular among players and has remained so even today. Since the LCD Matrix, Dye has come out with several other versions of the Matrix, each with different millings, features, and improvements. With the Matrix revolutionizing paintball marker, the DYE Rotor did the same for loaders in 2009.[2] 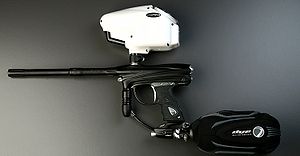 Today there are several types of markers that are made by DYE. Starting in 2003, DYE produced a Dye ultralite Autocker to compete with the Shocktech SFL Autococker. DYE has produced a new model of the matrix every year, each year improving some component of the previous marker marker. In 2010, DYE introduced the DYE NT paintball marker to its gun line. Dye Autococker Dye reflex Autococker Dye ultralite autococker

The DYE rotor was released in 2009 as DYE's first loader and was meant to compete with the other high-end hoppers that were already on the market. The rotor was received well by the paintball community mostly because of it high level of performance, easy-ness to use and maintain, and because of the DYE name. The rotor is a force feed hopper that supplies the marker with paintballs to shoot at very high rates of fire. It supplies the marker by actually forcing the paintballs into the breach of the gun. This is done with the new "rotor" designed assembly which resembles a water pump impeller in the hopper. The assembly agitates the paintballs sitting in the hopper and then forces them down the feedtube and into the paintball marker. This is all done without breakage or jamming of the balls. The loader can be disassembled easily into 15 main parts. This allows for easy cleaning and interchanging of parts for repair or upgrade.[14]

In the early part of the 2000s, DYE added on a subsidiary company, Proto Paintball. Proto sold similar equipment, markers, and apparel but at a slightly lower price. In 2005, Proto released the PM5 (2005 Proto Matrix) which was very similar to the DYE Matrix line. These guns were mid-range markers that offered the same reliability but with slightly less quality and for a lower price. The main differences between the Proto and DYE models was that the PM5 came with a one piece Proto barrel, standard Proto frame, and had several small internal differences such as a shorter bolt that makes it operate at a higher pressure. In 2006, however, Proto Matrices came stock with a two piece Proto barrel and in 2008 they came stock with an Ultralite frame. Along with the Proto matrix, Proto produces the PMR (Proto Matrix Rail) and the Proto SLG (Super Light Gun). The PMR operates using an "unbalanced" spool valve design which cuts down on cost yet reduces air efficiency. The SLG is even more different in that it uses an "unbalanced" spool valve design, a mechanical solenoid as opposed to a pneumatic solenoid, and it does not use the FUSE bolt system.[15]