The Timbers are the 18th club of Major League Soccer, and replace the USL First Division's team of the same name, while retaining the same ownership. The MLS club is the fourth Portland team to share the legacy of the Timbers name, which first originated in the old North American Soccer League in 1975.

The announcement of the Timbers' entry into MLS was the culmination of a nearly two-year-long process for Merritt Paulson, dating back at least to May 2007, when Paulson led a group that bought the Portland Beavers and the USL Timbers. The group included former Treasury Secretary Henry Paulson (Meritt Paulson's father) who holds a 20% stake.[1] The biggest issue for the city of Portland was that due to league concerns about seating configuration, field surface, and scheduling, obtaining an MLS club would require a new stadium.[2]

In October 2007, Paulson was told PGE Park could be upgraded for about $20 million, and a new baseball stadium (with 8,000 to 9,000 seats) would cost about $30 million.[3] By November 2008, Paulson told The New York Times he expected Portland taxpayers would spend $85 million to "build a new baseball stadium for his Beavers and renovate PGE Park—just remodeled in 2001 at a cost to taxpayers of $38.5 million—for soccer", and that in exchange, he would spend $40 million for the franchise fee to bring a new Major League Soccer team to Portland.[1] MLS was in support of the proposal, wanting to continue to expand the number of owners in the league (for a while, all of its teams were owned by three men: Phil Anschutz, Lamar Hunt, and Robert Kraft).[1]

Timbers thank their fans after a home victory

Though supporting the acquisition of an MLS franchise raised numerous issues for Mayor Sam Adams and the Portland City Council,[4] the Timbers were announced as Major League Soccer's eighteenth team on March 20, 2009 by Commissioner Don Garber.[5] The announcement occurred in the middle of the first and second round games of the 2009 NCAA Men's Division I Basketball Tournament being held in Portland the same week.[6] The announcement noted that the team would retain the Portland Timbers name.[7]

The team owner is Peregrine Sports, LLC, a group led by Merritt Paulson. Paulson was also the head of Shortstop, LLC which owned the USL-1 Timbers as well as the Pacific Coast League's Portland Beavers.

Former MLS forward and assistant coach John Spencer was named the first head coach of the MLS-era Timbers on August 10, 2010. It was also announced that Gavin Wilkinson, head coach of the USL-1/USSF D-2 Timbers, would stay on as the general manager/technical director of the MLS side.[8]

The Timbers signed five players before the MLS Expansion Draft on November 24, 2010. Three were part of the Timbers D-2 Pro League squad in 2010 (Steve Cronin, Bright Dike, and Ryan Pore), one was signed from D-2 Pro League team Austin Aztex (forward Eddie Johnson) and one was acquired via trade with New York Red Bulls (midfielder Jeremy Hall). On November 24, 2010, the Timbers, along with the other 2011 expansion team, Vancouver Whitecaps FC, participated in an MLS Expansion Draft, each selecting 10 players from existing teams.[9] Immediately after the Expansion Draft, the Timbers announced the trade of their first pick (midfielder Dax McCarty, from FC Dallas to DC United for defender Rodney Wallace.[10] The Timbers and Whitecaps also participated in the 2011 MLS SuperDraft on January 13, 2011 with the Whitecaps having the first pick, and the Timbers having the second pick. Vancouver surprised some by selecting youngster Omar Salgado and Portland swiftly selected Akron midfielder/forward Darlington Nagbe.[11]

The Timbers played their first MLS game on March 19, 2011, against reigning MLS champions Colorado Rapids, but lost 3-1. The first goal in the Timbers' MLS era was scored by Kenny Cooper.[12]

Portland Timbers' MLS logo incorporates elements of the former USL design. The primary reference to the original crest is the circular shape that represents unity, wholeness, and the pursuit of perfection. The axe alludes to the Pacific Northwest's logging industry since loggers traditionally used axes to cut down trees. There are three chevrons organized to resemble a pine tree that refer to the Timbers' membership in three separate leagues: the original North American Soccer League, the United Soccer Leagues, and Major League Soccer. The team's colors, ponderosa green and moss green, represent the state of Oregon's forests.[13]

It was announced in September 2010 that the Portland Timbers' jerseys would be sponsored by Alaska Airlines.[14] On Thursday December 9 the jersey was revealed at a runway show at Portland International Airport. The home jersey is a two-tone halved green shirt [15] while the alternate jersey is red, in honor of Portland being known as the Rose City.[16]

Portland plays in the newly-renovated Jeld-Wen Field (formerly PGE Park), which they expect to share with the Portland State Vikings football team. The stadium's other tenant, the Beavers, unable to find a location for a new ballpark will be moving to Tucson, Arizona.[17]

Initially, city funding for renovation of PGE Park was tied to simultaneous construction of the new ballpark; but due to delays caused by public criticism of ballpark sites chosen so far and a deadline to begin stadium renovation, the funding for the two projects was separated.[18] The capacity of the renovated Jeld-Wen Field is expected to be between 22,000 and 23,000.[19] 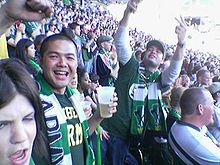 The main supporters group of the Portland Timbers is the Timbers Army. Its members are known for their loud, enthusiastic support and the raucous atmosphere they create at Timbers games.[20][21] The Timbers Army was founded in 2001 as the Cascade Rangers,[22] a reference to the Cascade Range of mountains in the Pacific Northwest region of North America. The group began congregating in section 107 ("The Woodshed") of PGE Park ("The Piggy") to create a European-style rooting section for the club, complete with drumming, flags, scarves, smoke bombs and constant chanting and cheering. By 2002, the group had changed its name to the Timbers Army in order to lose any perception of partiality toward Scottish football club Rangers and because the Timbers uniforms at the time resembled those of Rangers rival Celtic.[23]

The Timbers Army celebrates with smoke bombs after a Portland goal

During the NASL and USL years the team's mascot was a grizzled lumberjack named Timber Jim.[25] On January 24, 2008, Jim announced his retirement. His final farewell was a game played against Puerto Rico Islanders on April 17, 2008, which was won 1-0.[26] Having served as the unofficial mascot from then on, Timber Joey was inaugurated as the new official mascot at an exhibition game vs Juventus Primavera on June 14, 2008,[27] a game the Timbers won 1-0,[28] and has served in that capacity ever since. Joey's trademark is cutting a round from a large log with one of his chainsaws every time the Timbers score a goal. This round is presented to the goal-scoring player after the game. If the team achieves a shutout ("clean sheet"), the goalkeeper also receives a round.

Several Portland Timbers games are televised nationally by Fox Soccer Channel or ESPN2. The rest of the games are televised regionally in English by Root Sports (formerly FSN Northwest), locally in English by FOX 12 Oregon or PDX TV and locally in Spanish by Estrella TV. FOX 12 Oregon also airs a weekly highlight show called Timbers in 30 on Sunday evenings.[29]

John Strong — a USL Timbers radio play-by-play announcer — calls the games for the local and regional broadcasts and is joined by former Premier League and Jamaica midfielder Robbie Earle on color commentary.[30]

On the radio, all Timbers games are broadcast in English on 750 AM "The Game" and are simulcast in Spanish on both La Pantera 940 AM and KSND 95.1 FM. 750 AM also features Talk Timbers, a weekly radio show dedicated to the team and soccer, hosted by John Strong.[29]

This list shows players who have played for the team in official 2011 MLS Reserve Division games, but are not part of the senior roster.[32]