The Purple Rose of Cairo

The Purple Rose of Cairo 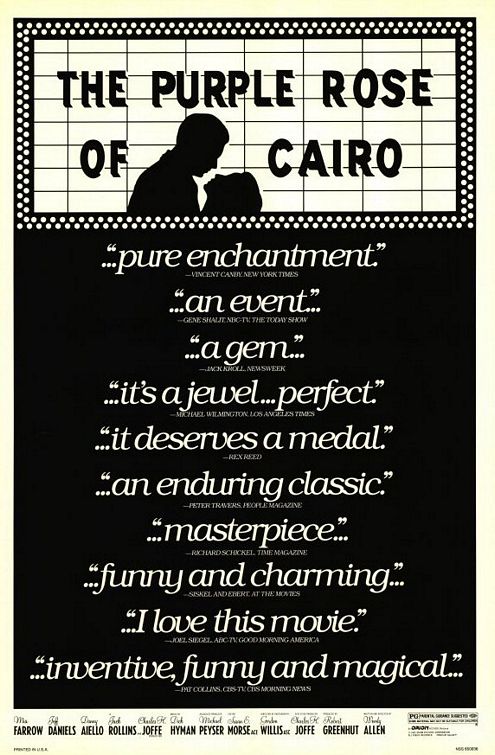 "The Purple Rose of Cairo" is an award-winning 1985 film written and directed by . It tells the story of a film character who leaves the film and enters the real world.

"The Purple Rose of Cairo" is the name of a film-within-the-film, with Jeff Daniels playing the dual roles of Tom, a character in the film-within-the-film, and Gil, the actor who portrays Tom. Tom literally breaks the , emerging from the into the colorful real world on the other side of the cinema's screen. He is drawn out by Cecilia (played by ), a film buff who goes to the movies to escape her bleak life and loveless marriage to Monk (), who she has attempted to leave numerous times. The producer of the film finds out that Tom has left the film, and he and Gil fly cross-country to the theater where it happened. This sets up an unusual involving Tom, Gil and Cecilia. The downbeat ending is that Gil abandons Cecilia and returns to Hollywood but is last seen quietly wracked with guilt. Having been left without a lover, job or home (but most likely to return to her abusive husband), Cecilia is ends up sitting in a theater watching and dancing to "Cheek-to-Cheek" in the film "Top Hat", forgetting her dire situation and losing herself in the film.

A number of the scenes featuring Tom and Cecilia are set at the Bertrand Island Amusement Park, which closed just prior to the film's production. It was also filmed at the Raritan Diner in . Today the diner is located in .

Farrow, Daniels and Aiello play the leading roles. Actors playing significant roles in the film-within-the-film include , , John Wood, and . and (among others) play prostitutes whom Tom innocently encounters along the way.

In a rare public appearance at the in 2001, Allen listed "The Purple Rose of Cairo" as one of only a few of his films that ended up being "fairly close to what I wanted to do" when he set out to write it. [ [http://film.guardian.co.uk/interview/interviewpages/0,,562687,00.html Woody Allen (II) interview] from "The Guardian Unlimited"] Allen provided more detail about the film's origins in a comment he made a year earlier, during a for ""::

"The Purple Rose of Cairo" opened in North America on , in 3 theaters, where it grossed an exceptional $114,095 ($38,031 per screen) in its opening weekend. Box office settled down upon further expansions, and its total gross of $10,631,333 was in line with most films of the period. [ [http://www.boxofficemojo.com/movies/?id=purpleroseofcairo.htm "The Purple Rose of Cairo" statistics] from BoxOfficeMojo.com]