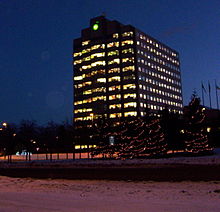 The Prudhoe Bay oil spill (2006 Alaskan oil spill) was an oil spill that was discovered on March 2, 2006 at a pipeline owned by BP Exploration, Alaska (BPXA) in western Prudhoe Bay, Alaska. Initial estimates said that up to 267,000 US gallons (6,400 bbl) were spilled over 1.9 acres (7,700 m2), making it the largest oil spill on Alaska's north slope to date.[1] Alaska's unified command ratified the volume of crude oil spilled as 212,252 US gallons (5,053.6 bbl) in March 2008.[2] The spill originated from a 0.25-inch (0.64 cm) hole in a 34-inch (86 cm) diameter pipeline. The pipeline was decommissioned and later replaced with a 20-inch (51 cm) diameter pipeline with its own pipeline inspection gauge (pig) launch and recovery sites for easier inspection.[2] In November 2007, BP Exploration, Alaska (BPXA) pled guilty to negligent discharge of oil, a misdemeanor under the federal Clean Water Act and was fined US$20 million.[3]

The North Slope is the region between Brooks Range and the Arctic Ocean. This region boasts not only rich wildlife,[citation needed] but also most of Alaska's petroleum reserves.[citation needed]

In an email to the company's lawyer, a union leader had expressed concern over the lowering of the number of staff on the Corrosion Monitoring team from eight to six.[4] On March 6, 2006, Oil industry critic Chuck Hamel claimed the volume of leak was around 798,000 US gallons (19,000 bbl), but provided no documentation to support that claim.[5] On March 10, 2006, Alaska's Unified Command Joint Information Center released its official estimate that 201,000 to 201,000 to 267,000 US gallons (760 to 1,010 m3) were released.[6] The unified command's officially ratified spill volume was not announced for another two years. On March 25, 2008, the unified command for spill response, consisting of several groups including Alaska Department of Environmental Conservation and the U.S. Environmental Protection Agency‎ (EPA), announced that the volume of crude oil spilled was 212,252 US gallons (5,053.6 bbl).[2]

The Alaska oil spill had a major impact on BP as it was a loss to its image as well as a financial loss. A dime-sized hole caused by corrosion let over 5,000 barrels (790 m3) of crude oil spill out of the pipeline. The oil had not just left behind a bare 2-acre (8,100 m2) patch of ground, but the leak, and the subsequent discovery that six miles (10 km) of pipeline was badly corroded, led to the shutdown of much of Prudhoe Bay oil field and the loss of hundreds of millions of dollars.

The impact of the leak was so severe that BP shares slumped nearly 2 percent. BP estimated that it would cost US$100 million to replace the 16 miles (26 km) of corroded pipeline. The company had to face tough questions from the public and shareholers about why the US$200 million a year it spent in maintenance wasn't enough to keep the 400,000-barrel-per-day (64,000 m3/d) field, the country's largest, running smoothly.[7] BP also suffered a loss of more than a million dollars a day in profits from Prudhoe Bay. BP was investigated by Congress for their role in the spill.[citation needed]

Red flags and warning signs had been raised about corrosion on several occasions both from within and outside the organization but had been ignored.[3] The 1992 tests on the eastern line had indicated the presence of calcium in the line, but nothing was done about it.[original research?] A company report in year 2005 said BP based its corrosion-fighting on a limited budget instead of needs.[8]

Employees had raised their concerns before the actual incident, which were ignored by BP management. In an e-mail to a company lawyer in June 2004, Mr. Kovac, an official of the United Steelworkers union representing workers at the BP facility, forwarded a collection of his earlier complaints to management.[4] One of these, dated 28 February 2003, concerned "corrosion monitoring staffing levels". It began, "The corrosion monitoring crew will soon be reduced to six staff down from eight."[4][citation needed] Initially BP denied that they took money-saving measures maintaining the pipeline. Robert Malone, the chairman of BP America, cited a report commissioned by BP which concluded that "budget increases alone would not have prevented the leak".[9] He later admitted that there "was a concerted effort to manage the costs in response to the continuing decline in production at Prudhoe Bay".[9] One of the reasons for the pipeline failure was an insufficient level of corrosion inhibitor, a liquid which resists corrosion of pipeline by the corroding liquid, which is water.[10] John Dingell read from an internal BP email that said budgetary constraints would force the end of a programme to inject corrosion inhibitor directly into the pipeline system.[9] The process of injecting corrosion inhibitor directly into a pipeline, though costly, is much more effective than injecting in a process plant.

Carolyn Merritt, chief executive officer of the U.S. Chemical Safety and Hazard Investigation Board, told the committee that "virtually all" of the root causes of the problems at Prudhoe Bay had "strong echoes" of those that led to the 2005 explosion in Houston. These had included cost cutting and a failure to invest in the plant. The committee was also told that the spillage happened at a time when BP was making huge profits.[9]

BP reported to the media that an estimated volume of around 267,000 US gallons (1,010,000 L) of oil was spilled.[12] Soon after the discovery of the leak, the US Department of Transportation ordered BP to test its pipelines using an internal probe called a smart pig.[5][8] Some of these lines had not been smart-pigged since 1992. BP came up with an Action Plan which was outlined in a letter sent to Thomas Barrett, administrator for pipeline safety for Department of Transportation’s Pipeline and Hazardous Materials Safety Administration (PHMSA). BP’s Steve Marshall detailed measures for pigging or removing oil residue from the pipeline and for various draining and dismantling procedures. Marshall also noted that a special 27 member task force was appointed to address the situation.[13]

As a result of news of the shutdown, the price of crude oil on NYMEX jumped US$2.22 a barrel closing at US$76.98 per barrel.[14] Following the Prudhoe Bay pipeline leak in March 2006, due to slow progress in stopping the oil spill, BP was forced to shut down its Prudhoe Bay oil facility, which produced about 2.6% of the United States demand for gasoline. The scenario was a contributing factor for pushing the price of oil to USD$77 per barrel in August 2006.[7]

In July 2006, BP sent a smart pig through its eastern pipelines, detecting extensive corrosion at several places. Soon after that BP began temporary production shut down of the eastern side, citing the discovery of "unexpectedly severe corrosion". This reduced the per day production from 400,000 barrels (64,000 m3) to 200,000 barrels (32,000 m3). This amounted to reduction in domestic oil supply by 8% at that time.[8] In October 2007, BP was fined US$20 million for the Prudhoe Bay oil spills. BP has paid a US$12 million federal criminal fine, US$4 million in criminal restitution to the state, and US$4 million for Arctic research. BP's local subsidiary, BP Exploration (Alaska) Inc., was placed on probation for three years.[3]