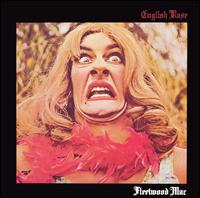 It is available as of January 2007 as a Japanese import. It is also available on in the UK.

Mick Fleetwood appears in drag on the cover.