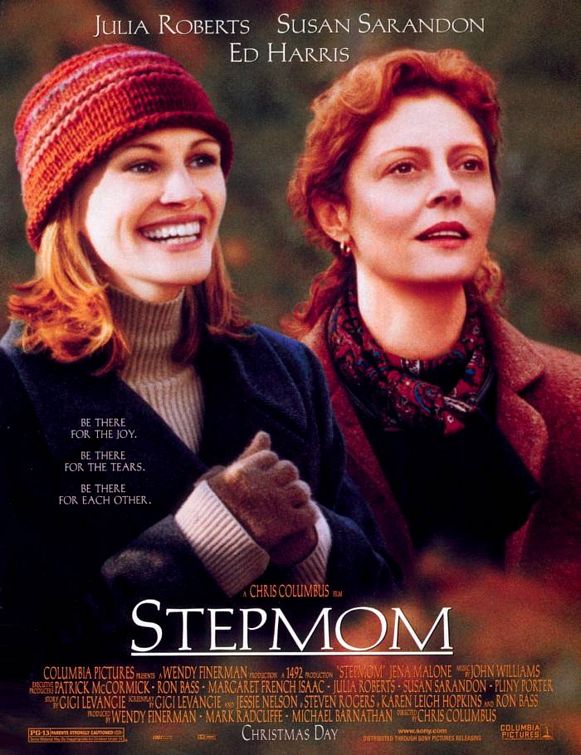 "Stepmom" is a 1998 American film directed by Chris Columbus. The film stars and .

Set in the busy streets of New York, Jackie () and Luke () are a divorced couple struggling to keep their children Anna () and Ben () happy with this sudden change of lifestyle.

This task is far from easy, as Luke for some time has been dating and is living with his new girlfriend Isabel () who is a successful photographer and several years his junior. Isabel tries very hard to make Anna and Ben feel comfortable and happy around her but the kids (more Anna than Ben) are very harsh and rude to her.

Jackie, indirectly blaming Isabel for her failed marriage, also treats her very coldly, largely because Isabel is a career-minded woman, a deep contrast to Jackie's family-mindedness, putting her children first and living her life through them. After a long string of arguments and hurt feelings between Isabel, Jackie and Anna, Luke proposes to Isabel, making her Anna and Ben's official stepmom. This causes even more friction between the two children (who want their parents back together) and Isabel.

However, just when it feels like things can't get any worse, Jackie is diagnosed with cancer, which she is told she could possibly die from. Treatments for a remission are futile, as the disease has spread. Jackie experiences a range of negative emotions, angry at the woman who she feels played a role in her failed marriage and broken family, and angry at the fact that after all of the sacrifices she made for her family, she will soon lose her life.

Both Jackie and Isabel clash repeatedly, largely over Isabel's parenting skills, which are less rigid than Jackie's, and Isabel's inability to say no and allowing her kids to take a backseat to her work. Yet somehow, Jackie and Isabel manage to call a shaky truce, as Isabel must learn that she will soon step into the role of surrogate mother.

The two women finally bond with each other when Isabel reveals her admiration of Jackie's maternal instincts, while Jackie in turn compliments Isabel's hipness as a means to connect with Anna. Isabel finally lets her guard down when she tearfully tells Jackie her biggest fear is that on Anna's wedding day, all Anna will wish for is her mother's presence. Through her own tears, Jackie says her own fear is that Anna will forget her. The movie ends with Isabel taking a family picture of Luke and Jackie with their children. Jackie invites Isabel to get into the shot, which she does, and as the begin, both women are shown in a photo side by side, finally at peace with one another.

*Stepmom grossed $91,137,662 in the US. [ [http://www.movieweb.com/movies/film/85/1685/summary.php Stepmom (1998)] , Movieweb.com] and $159,710,793 worldwide
*The film was dedicated "In loving memory of Irene Columbus", director Chris Columbus's mother, who in the year before the movie was released had died of cancer.
*The song that Isabel ('Julia Roberts' ) sings to Ben (Liam Aiken) in the hospital is "If I Needed You". It was recorded by Lyle Lovett on his 1998 album "Step Inside This House". Lyle and Julia were married at one time.
*Chris Columbus's daughter, Eleanor Columbus makes an appearance as the little girl in ballet class (but is uncredited).
*Patrick Doyle wrote a score for the film which was rejected.
*Rejected titles include "Goodnight Moon", "Promises Kept", "See You in My Dreams" and "Always, Always."
*"", a hit single by and , is a part of the soundtrack.
*The trailer for this film contained a logo instead of a logo. [ [http://www.movie-list.net/classics43007/stepmom.mov Movie-List - Download New and Classic Movie Trailers ] ]
*There is a very brief shot of Sarandon's daughter, Eva Amurri, during the Thanksgiving pageant scene.