Mandala Airlines was a low-cost airline headquartered in the Mandala Airlines Building in West Jakarta, Jakarta, Indonesia.[2][3] Mandala operated scheduled services to 3 international and 17 domestic destinations, used a fleet of narrow body Airbuses. Its main operational base was Soekarno-Hatta International Airport in Jakarta.[4] The airline had positioned itself as a provider of safe and reliable service combined with a competitive pricing scheme.[5] Due to debt problems, Mandala Airlines temporarily stopped flying all of their fleet on January 13, 2011. The company was reported to have asked the commercial court to delay debt recovery action against the airline.[6] The official application for postponement of debt payments to the Commercial Court has been filed for Rp.800 billion to about 271 creditors.[7] At end of February 2011, the creditors had finally accepted the airline's debt settlement proposal to convert debt to equity. It was approved by 70.58 percent of total creditors from the total debt of Rp.2.4 trillion.[8] After struggle with the funds, on September 24, 2011 the acquisition transaction was finally closed. Mandala would be back in the air 90 days after it, but certainly should got a new Air Operator Certificate first during it.[9]

PT Mandala Airlines was founded on April 17, 1969. The founders were Col. Sofjar, Maj. Gen. Raden Soerjo, Adil Aljol, Maj. (Air Force) Soegandi Partosoegondo, Kasbi Indradjanoe and Darwin Ramli. The airline was owned by PT Dharma Kencana Sakti, which in turn was the commercial arm of Yayasan Dharma Putra Kostrad, a foundation linked to Kostrad, the strategic reserve command of the Indonesian army. The airline was named after Operation Mandala, the military operations to incorporate West Papua into Indonesia. The name also refers to mandala, a Sanskrit term for a diagram symbolizing the universe, which is used as the logo of the corporation.

In its early years Mandala Airlines operated flights between Jakarta and destinations in eastern Indonesia, such as Ambon, Gorontalo, Kendari, Makassar and Manado. In 1972 Mandala took over Seulawah Air Service (another military-owned airline), which flew to cities in western Indonesia, such as Banda Aceh, Banjarmasin, Medan, Padang, Palembang, Pekanbaru and Pontianak, giving the airline a national coverage.

Under military management, Mandala Airlines kept a relatively quiet existence as a second-tier airline. In 1992, it retired the last of its aged turboprop fleet and replaced them with leased second hand jet aircraft. In 2001, it suffered a financial scandal,[10] in which no less than IDR 135.5 billion (about USD 13.5 million) was stolen from the company funds by a senior Kostrad officer.[11]

Despite being awarded as Indonesia's "Most Potential Brand in Airlines Service" in 2002,[12] Mandala found it hard to compete with other recently-emerged Indonesian airlines. In 2005, Mandala experienced a high profile accident in Medan. At about the same time, political developments in Indonesia forced the military to divest itself of its businesses, resulting in Mandala Airlines being offered for sale. After the Indonesian government refused to take over Mandala Airlines,[13] Cardig International acquired the airline for IDR 300 billion (USD 34 million) in April 2006.[14] Indigo Partners acquired 49% of Cardig's shares in October 2006. 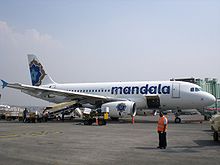 Within one year of its acquisition, Mandala Airlines transformed its image into a modern airline satisfying international standards of safety.[12] It adopted the low-cost carrier model, in order to compete with other low-cost airlines in Indonesia.[15] Mandala Airlines created a special niche among Indonesia's low-cost carriers by creating an image as a safe airline, taking advantage of the relatively young age of its fleet.

Mandala has now completed the IOSA (IATA Operational Safety Audit) of the International Air Transport Association (IATA),[5] and other manufacturer audits. It contracted maintenance of its aircraft to Singapore Airlines Engineering Company (SIAEC).[16] Its safety improvements were recognized by the European Union as Mandala was among four Indonesian airlines (the others were Garuda Indonesia, Airfast Indonesia and Premiair) officially struck from the EU airline ban list on July 14, 2009.[17] Mandala is listed in Category 1 by the Indonesian Civil Aviation Authority for airline safety quality.[18]

Shortly after services between Jakarta and Macau started on 21 July 2010, the airline announced that all flights between 22 to 29 August 2010 had been cancelled. Concerns were raised by some passengers that the company did not provide adequate information about the abrupt cancellations.[21]

On May 2011, Singapore-based Tiger Airways Holdings and Saratoga Investama, an Indonesian strategic investment company owned by Sandiaga Uno, announced their plans in a filing to the Singapore Stock Exchange on Thursday. Tiger Airways will acquire a 33 percent stake, while the Saratoga Group will buy 51 percent of Mandala.[22] Mandala Airlines will focus on Low Cost Carrier (LCC) market because one of the shareholders, Tiger Airways also run an LCC operation.[23]

The airline's logo is a golden eight-pointed mandala reflecting the eight characters of humanity and the eight elements in Javanese tradition, with a five-petaled lotus in its centre reflecting Indonesia's five-principled state ideology, Pancasila. A new logo was unveiled on September 1, 2008, emphasizing the new image of the corporation. The new logo, designed by Veronica Halim & Eddy Purwanto of Nuage Branding, keeps the mandala and lotus theme of the original, but has a more streamlined design.

The current livery of Mandala Airlines is a "Eurowhite" scheme, consisting of a white fuselage with a blue 'mandala' title. The company logo is applied on the tail and the outboard sides of engine nacelles. Mandala's previous livery was also a "eurowhite" scheme with a different typeface for the 'Mandala' title, a blue tail and the original logo. The airline's earliest scheme was a bare-metal lower and white upper fuselage with a blue cheatline across the cabin windows and a red 'MANDALA' title.

Shortly before they ceased operations, Mandala Airlines announced that they were considering a direct flight from Jakarta to Ho Chi Minh City.

Mandala Airlines is a single class service airline. It had a buy on board service offering food and beverages for purchase by passengers, but no in-flight entertainment. Seats were reserved and allocated during check-in. Free in-flight magazines and newspapers were provided during flight.

Mandala Airlines had a baggage allowance of 20 kg (44 lb) per passenger, with an extra 5 kg (11 lb) for priority passengers. Priority passengers also benefit from better seat locations (at the front of the aircraft), free lounge access and free food and beverages (both in lounges and during flight).[25]

In line with current airline practice, Mandala Airlines utilized an electronic ticketing and an e-payment system. The airline had a 24-hour call center and a website for customers to book and pay for tickets electronically. Tickets for TransNusa destinations can be booked from the website, but flights involving the different airlines need separate bookings for each leg. 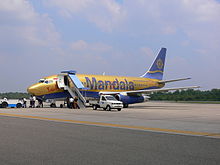 During its 40 years of operation, Mandala Airlines has experienced two significant accidents and several minor incidents. However, it has had no incidents since 2007, when it began to retire older aircraft and introduce newer ones.