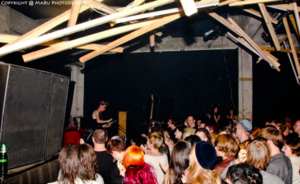 The Drop Dead Festival is the largest DIY festival for art-damaged music. It books as many as sixty five bands per event, and has been known to attract attendees from over 30+ countries. Drop Dead is an electro, post-punk, synthpunk , and experimental multiple-day festival, annually held in New York, NY and Europe with additional smaller events having formerly been held in Los Angeles, Philadelphia, Boston, and New Jersey. The festival is also notable for its elaborate stage designs, bazaar of vendors of scene paraphernalia, movie screenings, and a dance floor featuring underground DJs from around the world.

The first Drop Dead Festival was held in August 2003, after the success of a series of smaller events put on by NY Decay Productions at the Pyramid in New York. The festival was originally held at the famous CBGBs punk rock club, but subsequent Drop Dead Festivals moving to the much larger Knitting Factory, also in lower Manhattan. Although the main event moved to larger locations CBGB's traditionally held pre-parties and after-parties for the festival until it closed. In 2005, the Drop Dead Festival grew to four days, during Halloween week. Over 5,000 people attended this event, featuring headliner Nina Hagen.