It is composed of four stations located on the FM band, broadcasting the same programming at all times:

There is also one translator to relay programming on the four stations: 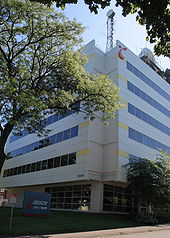 The headquarters of WNPR and CPTV in Hartford, Connecticut

The stations air primarily news and talk from NPR. It promotes itself on-air as "WNPR/Connecticut Public Radio." It is headquartered with CPTV in Hartford, and operates an additional studio in New Haven.

The network's first station, WPBH in Meriden, signed on in June 1978. CPBI originally wanted the WNPR calls, but the FCC turned it down due to objections from WPLR in New Haven, who claimed the calls sounded too similar. Previously, 90.5 had been used as a low-powered translator of WFCR in Amherst, Massachusetts. WPBH's sign-on brought NPR programming to Hartford for the first time; it had been one of the largest cities in the nation without an NPR station. It became WPKT in 1984, after board chairman Homer Babbidge requested the FCC change the call letters to honor CPBN head Paul K. Taft.

On September 15, 2011, WPKT and WNPR swapped call letters. Although 90.5 has always been the main station, the network had been using WNPR as its on-air name since the 1980s.