The culture of Poland is closely connected with its intricate 1000 year history[1] Its unique character developed as a result of its geography at the confluence of various European regions. With origins in the culture of the Proto-Slavs, over time Polish culture has been profoundly influenced by its interweaving ties with the Germanic, Latinate and Byzantine worlds as well as in continual dialog with the many other ethnic groups and minorities living in Poland.[2] The people of Poland have traditionally been seen as hospitable to artists from abroad and eager to follow cultural and artistic trends popular in other countries. In the 19th and 20th centuries the Polish focus on cultural advancement often took precedence over political and economic activity. These factors have contributed to the versatile nature of Polish art, with all its complex nuances.[2] Nowadays, Poland is a highly developed country; however, it retains its tradition.

Polish foods kielbasa, pierogi (pierożki), pyzy (meat-filled dough balls), kopytka, gołąbki (pronounced [ɡɔˈwɔmpki]), śledzie (herring) (['ɕlɛd͡ʑɛ]), bigos, kotlety (schabowy and mielony) and much more. Traditionally, food such as soups have been prepared in large vessels intended for groups, often necessitating the use of devices such as oars in their preparation. Traditionally, hospitality is very important.

In the Middle Ages, as the cities of Poland grew larger in size and the food markets developed, the culinary exchange of ideas progressed & people got acquainted with new dishes and recipes. Some regions became well known for the type of sausage they made and many sausages of today still carry those original names. The peasants acknowledged their honorable judgment, allowing them to maintain nourished for longer periods of time.

Polish cities and towns reflect the whole spectrum of European styles. Poland's Eastern frontiers used to mark the outermost boundary of the influences of Western architecture on the continent.

History has not been good to Poland's architectural monuments. However, a number of ancient structures have survived: castles, churches, and stately buildings, often unique in the regional or European context. Some of them have been painstakingly restored, like Wawel Castle, or completely reconstructed after being destroyed in the Second World War, including the Old Town and Royal Castle in Warsaw, as well as the Old Towns of Gdańsk and Wrocław. Architecture of Gdańsk is mostly Hanseatic architecture, common in cities along the Baltic sea and in the northern part of Central Eastern Europe. The architectural style of Wrocław is representative of German architecture, since it was a part of the German states for centuries. The centre of Kazimierz Dolny on the Vistula is a good example of a well-preserved medieval town. Poland's ancient capital, Kraków, ranks among the best-preserved Gothic and Renaissance urban complexes in Europe. Meanwhile, the legacy of the Kresy Marchlands of Poland's eastern regions with Wilno and Lwów (now Vilnius and Lviv) as two major centres for the arts, played a special role in these developments with Roman-Catholic church architecture deserving special attention.[2] In Vilnius (Lithuania) there are about 40 baroque and Renaissance churches. In Lviv (Ukraine) there are Gothic, Renaissance, and baroque urban s with influences of the orthodox and Armenian church.

One of the best-preserved examples of the Modernist architecture in Europe is located in Katowice, Upper Silesia, designed and built in the 1930s. Interesting buildings were also constructed during the Communist era in the style of Socialist Realism; while some remarkable examples of modern architecture were erected more 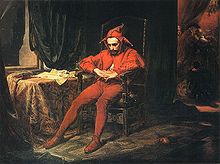 Polish art has always reflected European trends while maintaining its unique character. The Kraków school of Historicist painting developed by Jan Matejko produced monumental portrayals of customs and significant events in Polish history. Stanisław Witkiewicz was an ardent supporter of Realism in Polish art, its main representative being Jozef Chełmoński. The Młoda Polska (Young Poland) movement witnessed the birth of modern Polish art, and engaged in a great deal of formal experimentation led by Jacek Malczewski (Symbolism), Stanisław Wyspiański, Józef Mehoffer, and a group of Polish Impressionists. Artists of the twentieth-century Avant-Garde represented various schools and trends. The art of Tadeusz Makowski was influenced by Cubism; while Władysław Strzemiński and Henryk Stażewski worked within the Constructivist idiom. Distinguished contemporary artists include Roman Opałka, Leon Tarasewicz, Jerzy Nowosielski, Wojciech Siudmak, Mirosław Bałka, and Katarzyna Kozyra and Zbigniew Wąsiel in the younger generation. The most celebrated Polish sculptors include Xawery Dunikowski, Katarzyna Kobro, Alina Szapocznikow and Magdalena Abakanowicz. Since the inter-war years, Polish art and documentary photography has enjoyed worldwide recognition. In the sixties the Polish Poster School was formed, with Henryk Tomaszewski and Waldemar Świerzy at its head.[2] 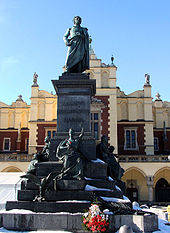 Monument to Adam Mickiewicz, one of the greatest Polish poets, at the Main Market Square in Kraków

Destruction of the Adam Mickiewicz Monument in Kraków by Nazi German forces, August 17, 1940.

Since the Christian and the subsequent access to Western European civilization, Poles developed a significant literary production in LatinConspicuous authors of the Middle Ages are among others Gallus Anonymus, Wincenty Kadłubek and Jan Długosz, an author of the monumental work on the history of Poland. With the arrival of the Renaissance, Poles came under the influence of the artistic patterns of the humanistic style, actively participating in the European issues of that time with their Latin works.

The origins of Polish literature written in the first language go back beyond the 14th century. In the 16th century the poetic works of Jan Kochanowski established him as a leading representative of European Renaissance literature. Baroque and Neo-Classicist belle letters made a significant contribution to the cementing of Poland's peoples of many cultural backgrounds. The early 19th century novel "Manuscrit trouvé à Saragosse" by Count Jan Potocki, which survived in its Polish translation after the loss of the original in French, became a world classic. Wojciech Has' film based on it, a favourite of Luis Buñuel, later became a cult film on university campuses. Poland's great Romantic literature flourished in the 19th century when the country had lost its independence. The poets Adam Mickiewicz, Juliusz Słowacki and Zygmunt Krasiński, the "Three Bards", became the spiritual leaders of a nation deprived of its sovereignty, and prophesied its revival. The novelist Henryk Sienkiewicz, who won the Nobel Prize in 1905, eulogised the historical tradition. It is difficult to grasp fully the detailed tradition of Polish Romanticism and its consequences for Polish literature without a thorough knowledge of Polish history.[2]

In the early 20th century many outstanding Polish literary works emerged from the new cultural exchange and Avant-Garde experimentation. The legacy of the Kresy marshlands of Poland's eastern regions with Wilno and Lwów (now Vilnius and Lviv) as two major centres for the arts, played a special role in these developments. This was also a region in which Jewish tradition and the mystic movement of Hasidism thrived. The Kresy were a cultural trysting-place for numerous ethnic and national groups whose achievements were inspiring each other. The works of Bruno Schulz, Bolesław Leśmian, and Józef Czechowicz were written there. In the south of Poland, Zakopane was the birthplace of the avant-garde works of Stanisław Ignacy Witkiewicz (Witkacy). And, last but not least, there was Władysław Reymont awarded 1924 Nobel prize in literature for his novel Chłopi (The Peasants).

After the Second World War many Polish writers found themselves in exile, with many of them clustered around the Paris-based "Kultura" publishing venture run by Jerzy Giedroyc. The group of emigre writers included Witold Gombrowicz, Gustaw Herling-Grudziński, Czesław Miłosz, and Sławomir Mrożek.