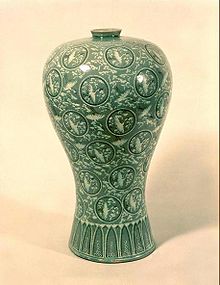 Korean ceramic history begins with the oldest earthenware from around 8000 BC. 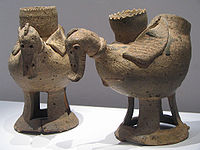 pottery of the Gaya confederacy. 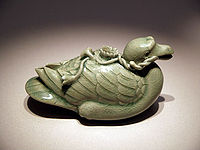 Incense burner made in Goryeo Dynasty

The Goryeo Dynasty (918–1392) achieved the unification of the Later Three Kingdoms under King Taejo. The works of this period are considered by some to be the finest small-scale works of ceramics in Korean history.

Key-fret, foliate designs, geometric or scrolling flowerhead bands, elliptical panels, stylized fish and insects, and the use of incised designs began at this time. Glazes were usually various shades of celadon, with browned glazes to almost black glazes being used for stoneware and storage. Celadon glazes could be rendered almost transparent to show black and white inlays. 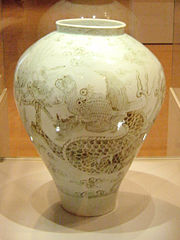 White porcelain of the Joseon Dynasty

Wares evolved along Chinese lines in terms of colour, shape, and technique. Celadon, white porcelain, and storage pottery were similar, but with slight variations in glazes, incision designs, florality, and weight. The Ming influence in blue and white wares using cobalt-blue glazes existed, but without the pthalo blue range, and the three-dimensional glassine colour depth of Ming Dynasty Chinese works. 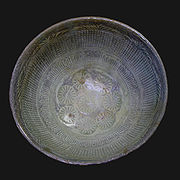 Simplified designs emerged early on. Buddhist designs still prevailed in celadon wares: lotus flowers, and willow trees. The form most often seen was that of pear-shaped bottles. Notable were thinner glazes, and colourless glazes for buncheong or stoneware.

After the prolonged fall of the Ming dynasty, immigration of some Chinese master potters occurred in southern coastal Korea. Qing colouring, brighter and almost Scythian in enamel imitation, was rejected by Korean potters, in favour of simpler, less decorated wares in keeping with a new dynasty that built itself on military tradition.

The wares began to assume more traditional Korean glazes and more specific designs to meet regional needs. This is to be expected, as the Scythian art influences were of the former dynasty. The rise of white porcelain occurred as a result of Confucian influence and ideals, resulting in purer, less pretentious forms lacking artifice and complexity.

In 1592 during the Japanese invasion of Korea, entire villages of Korean potters were forcibly relocated to Japan permanently damaging the pottery industry as craftsmen had to relearn techniques because the masters were gone. [1]

Nearly all exports of Korean ceramics went to Japan, and most were from provincial coastal kilns, especially in the Busan area. Export occurred in two ways: either through trading and the voluntary immigration of potters, or through outright invasion and theft of pottery and the forced relocation to Japan of families of potters who made the wares. The method of sending paper models of ceramics to Japan, having them approved and then having them manufactured began in the late 17th century, most often for the masters of Japanese Tea Ceremony. 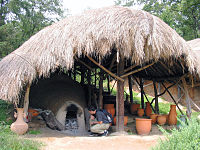 A kiln in Yangdong Village of Gyeongju.

Central to Korean success were the chambered climbing kilns that were used throughout the Joseon dynasty and exported abroad, especially to Japan by Korean kiln-makers where they were renamed as noborigama in the Karatsu area from the 17th century on.

Modern kilns are either electric or gas-firedre electric kilns.