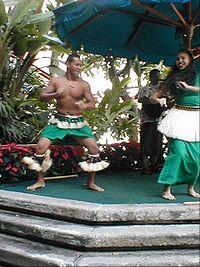 The culture of Hawaii has its origins in the traditional culture of the Native Hawaiians. As Hawaii has become home to many different ethnic groups during the past 200 years, each ethnic group has added elements of its own culture. Today, contemporary culture in Hawaii is a mix of these different cultures and ethnic groups.

Visual art and culture in Hawaii 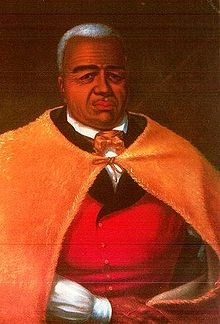 Some of the more prominent deities are:

Wakea - god who created the sky and fructified the land

Kū - expression of male generating power. Kū and his wife Hina were the first two gods to land in Hawai`i.

Hina - expression of female fecundity and the power of growth.

Kāne - god of fresh water, sunlight, and forests, and the ancestor of chiefs and some families of commoners. Kāne and his companion Kanaloa were the second two gods to reach Hawai`i

Kanaloa - god of the deep sea, often represented as a great squid. Companion and friend of Kāne.

Lono - god of agriculture, clouds, rain, winds, the surface of the sea, and the patron of the Makahiki harvest festival. His image was carried on the Makahiki tax-collecting circuit

Milu - god of the underworld

Aumakua - family guardians which can range from esteemed ancestors to animals which aided a family member and were subsequently deified.

The list is by no means exhaustive. Traditionally, Hawaiian belief states that 400,000 gods represent the many aspects of the cosmos.

Ho'oponopono (ho-o-pono-pono) is a cultural practice of reconciliation and forgiveness, usually combined with prayer. Similar forgiveness practices were performed on islands throughout the South Pacific, including Samoa, Tahiti and New Zealand. It is used in spiritual, emotional, mental, and physical healing practices. Traditional Hawaiian philosophy does not consider the physical and non-physical aspects of the world to be separate, therefore, to heal one aspect, all must be healed. Conversely, healing one will help to heal the rest. For example, if a person has an upset stomach, healing anger toward a sibling may also help to heal the stomach. Modern versions of ho`oponopono may also contain elements of Christian belief and ritual. A session of ho`oponopono is generally guided by a kahuna (traditional priest or healer), kahu (minister), kumu (traditional teacher), or family elder. Sometimes individuals will conduct ho`oponopono on themselves alone.

The Hawaiian Culture was discouraged and even banned by Calvinists Missionaries, beginning in 1819 with the end of the Kapu system of law by Queen Ka'ahumanu. Two resurgences occurred, the First Hawaiian Renaissance in from 1875 to 1887 during the Reign of King David Kalākaua I, considered the savior of Hula and Hawaiian Culture. After the missionary descendents took power in 1887 Hawaiian culture was once again under repression, for example the Hawaiian Language was outlawed in 1896. During the territorial era and the beginning of traveling, the Hawaiian Culture became appealing to tourists and was somewhat encouraged. Beginning in the 1960’s then gaining momentum in the 1970’s the second resurgence known as the Second Hawaiian Renaissance occurred. Lasting until the 1980s, it once again instilled national pride in Hawaiians*. In 1993 on the 100th anniversary of the Overthrow of the Hawaiian Kingdom a mass protest occurred at the State Capital. Following this, President Bill Clinton signed the Apology Resolution, making an official apology to the hawaiian people but not fixing anything socially.