The Bupa Great Manchester Run is an annual 10 kilometre run through the streets in Manchester city centre, which was established in 2003. Usually held in mid-May, it is among the largest and most prestigious mass participation runs in the United Kingdom.[1] It is part of the Great Run series of road races in the UK and is sponsored by Bupa.

The 2007 race had an estimated 28,000 participants.[2] Briton Jo Pavey won the women's event while Kenyan Micah Kogo won the men's, beating the UK all-comers' record by four seconds with a finishing time of 27:25 minutes.[3] Celebrity participants included Kelly Holmes, Amir Khan and members of the cast of Coronation Street.[2][4]

The following year saw almost 25,000 runners complete the course. Pavey successfully defended her title at the event while Rose Cheruiyot and Bezunesh Bekele took second and third place respectively. Austrian Günther Weidlinger took the title in the men's race. Unusual for a distance dominated by African runners, the top three finishers in the men's race (which also included Ukrainian Serhiy Lebid and Sweden's Mustafa Mohamed) were all European competitors.[5][6] 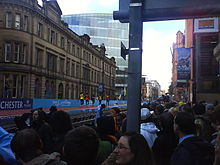 Athletes completing a lap of honour on the 150 metre track after the City Games.

The race was upgraded to IAAF Gold Label Road Race status and the 2009 edition was expanded to include the Great City Games. Around 33,000 runners signed up for the 10 kilometres race and both events were contested on 17 May.[7]

Previous 10 km winner Haile Gebrselassie stated that he wanted to regain his UK All-Comers' record, which was broken by Micah Kogo's event winning run in 2007.[8] Despite a strong first half of the race, Gebrselassie failed to break the record after he was impeded by wet and windy conditions. Vivian Cheruiyot won the women's race in 32:01 minutes but conditions also slowed her time, much to her dissatisfaction. Brian Alldis and Shelly Woods won their respective men's and women's wheelchair races.[9]

The addition of The Great City Games brought much attention to the Great Run event.[10][11][12] Comprising a number of 150 metres races to be run on the streets near Manchester's Deansgate, Olympic Champions Usain Bolt and Christine Ohuruogu accepted invitations to compete.[13][14] Other competitors included Debbie Ferguson-McKenzie, Ivory Williams, British Olympians Marlon Devonish and Donna Fraser, and a number of other British and Jamaican athletes.[15] Bolt suffered minor leg injuries after crashing his car near Kingston, Jamaica, but after cancelling a track meet and resuming training he stated that he would be fit to compete.[16][17] Bolt completed the distance in a world best time of 14.35 seconds while Ferguson-McKenzie won the women's race in 16.54 seconds.[18]