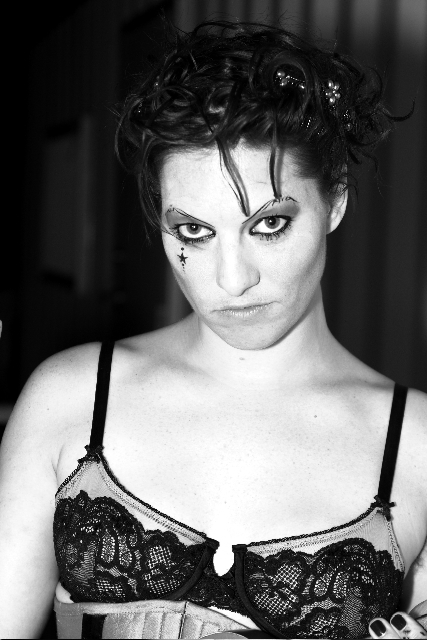 Palmer grew up in . She attended Lexington High School, where she was heavily involved in the department, and received her B.A. from . She worked for some time at an ice cream shop in called . She staged performances based on work by , an early influence, and was involved in the Legendary Pink Dots electronic mailing list, Cloud Zero. She then formed the Shadowbox Collective, devoted to putting on theatrical shows (such as the 2002 play, "Hotel Blanc", ["Boston Phoenix" [http://www.bostonphoenix.com/boston/music/live/documents/02157185.htm review of "Hotel Blanc"] ] which she directed) and , and busked as a called "The Eight Foot Bride" in as well as in many other locations. She references this line of work on The Dresden Dolls' self-titled CD, with the song "The Perfect Fit":

"I can paint my face
And stand very, very still
It's not very practical
But it still pays the bills"

"I give out flowers
To curious strangers
who throw dollars at my feet."

A group of white-painted living statues appears in the music video to the single "Sing" from the Dresden Dolls' album "."

Despite the fact that Palmer never learned to read music (though she briefly took lessons at two different times), she started a solo effort, appropriately named "Amanda Palmer and the Void."

In October 2000, Palmer met drummer and together they formed the Dresden Dolls. In an effort to expand the performance experience and interactivity, Palmer began inviting Lexington High School students to perform drama pieces at her live shows. Currently, the Dirty Business Brigade, a troupe of seasoned and new artists, perform at many gigs. The invited costumed characters mingle with the crowd before and during the show, and veteran groups sometimes join in with a choreographed stage act. Life-sized marionettes, coin-operated boys, living statues, and other undergroundlings greet fans while circus and burlesque draw the audience into the Dolls' music, creating a participatory atmosphere that allows the audience to experience numerous types of art simultaneously.

In June 2007, as part of the Dresden Dolls, she toured with the , [ [http://www.truecolorstour.com/ True Colors Tour web site.] ] including her debut in New York City's ,

July 2008 saw the release of the second Dresden Dolls book, the "".

Amanda Palmer and the Onion Cellar

Palmer conceived a musical, , which the Dresden Dolls performed in conjunction with the at the in Cambridge, Massachusetts, from December 9, 2006 to January 13, 2007. [cite web
url = http://amrep.org/onion/
title = THE ONION CELLAR
accessdaymonth = 3 Dec
accessyear = 2007
work = Web site of the American Repertory Theatre
publisher = American Repertory Theatre
quote = Inside the small confines of the mysterious club The Onion Cellar, the internationally renowned rock duo The Dresden Dolls provides nightly entertainment while a series of stories unfold around them. As singer, songwriter, and keyboardist Amanda Palmer and drummer Brian Viglione play their songs, the Onion Cellar becomes a space where rock and roll meets cabaret with humor and humanity. "World Premiere."] [cite web
url = http://www.thephoenix.com/OnTheDownload/PermaLink.aspx?guid=3634f0e3-a628-4230-90fc-d39925783c24
title = Dresden Dolls take the ART
author = On The Download editors
work = On The Download
coauthors = photo by Kelly Davidson
accessdaymonth = 21 Aug
accessyear = 2006
date = 2005-04-20
publisher = The Phoenix Media/Communications Group
quote = The Dresden Dolls are taking the world by storm. This punk cabaret duo from Boston are incredible musicians whose smart, personal, intricate songs and mesmerizing live performance have earned them a cult following. Now don’t tell anyone, but there’s a rumor that the Dolls may be appearing at a bizarre underground club somewhere in Cambridge – an Onion Cellar, where the audience peel onions for emotional release, where you never quite know who’s sitting next to you, where your life could change forever.]

Palmer's solo album, "", was released on . [cite web
url = http://dresdendollsdiary.blogspot.com/2008/05/fishpeoplebelly.html
title = fish/people/belly
accessdaymonth = 10 May
accessyear = 2008
last = Palmer
first = Amanda
authorlink = http://www.myspace.com/whokilledamandapalmer
date = 2008-05-10
work = The Dresden Dolls Diary
quote = the solo record got re-mastered and it's.....mind-blowing. it's so good. it's sooooooo gooooooooooooooooooooooood. so i feel safe in a deep way. because as long as the record is amazing then i can fuck everything else up and it's technically ok. it will be released september 16th. that is now like christmas day for me. it is four months away. that seems long.] produced and also played on the album. [cite web
url = http://www.spin.com/features/news/2007/04/070425_apalmer
title = Dresden Doll Preps Solo Debut
accessdaymonth = 8 Dec
accessyear = 2007
date = 2007-04-25
work = spin.com music for life
publisher = spin.com
quote = The Dresden Dolls' Amanda Palmer chats with SPIN.com about her forthcoming solo effort.] [cite web
url = http://www.theshadowbox.net/ddbb/viewtopic.php?p=356594&highlight=#356594
title = here to dispel.
accessdaymonth = 8 Dec
accessyear = 2007
last = Palmer
first = Amanda
date = 2007-04-01
work = Speculation: Solo Album Title
publisher = The Dresden Dolls
quote = ... i am recording the solo album....in nashville, at ben folds' studio, with ben, who is producing the record and playing on it.] The title is a play on an expression used by fans during ""' original run, "Who killed ?"

“I think for a long time I felt like I had to scream to get my point across until I finally realized maybe that’s not the best way,” said Palmer in an [http://venuszine.com/articles/music/features/4292/The_Dresden_Dolls_Amanda_Palmer_grows_up_and_dies_on_her_solo_debut article] in [http://www.venuszine.com Venus Zine] .

In July 2007, Amanda played three sold out shows (Boston, Hoboken, and NYC) in rare "with band" performances. Her backing band was Boston alternative rock group Aberdeen City, who also opened along with .

In August 2007, Amanda traveled to perform in the and other venues at the in , and also performed on 's "The Edinburgh Show". She collaborated with Australian theater company, "The Danger Ensemble"; both again appeared at the in and at other venues around Australia in December 2007.

In June 2008, Amanda established her solo career with two well-received performances with the . [cite web
url = http://www.boston.com/ae/music/articles/2008/06/20/all_dolled_up_at_the_pops/
title = All dolled up at the Pops - Palmer brings the edge but the fest needs more
accessdaymonth = 07 Jun
accessyear = 2008
last = Eichler
first = Jeremy
authorlink =
date = 2008-06-20
work = The Boston Globe
publisher = NY Times Co.
quote = Last night in Symphony Hall, Amanda Palmer brought some spark and much-needed edge to the Boston Pops's EdgeFest. On her own terms, Palmer, in strong gravelly voice, gave a richly satisfying performance that had this crowd roaring far more than most in Symphony Hall. But even she couldn't overcome the deeper tensions that make the EdgeFest a strained format.] [cite web
url = http://thephoenix.com/Boston/Music/63574-All-Dolled-up/
title = All Dolled up, Amanda Palmer and the Boston Pops, Symphony Hall, June 19, 2008
accessdaymonth = 28 Jun
accessyear = 2008
last = Smith
first = Rachel
authorlink = http://thephoenix.com/Boston/Authors/RACHEL-HOLLIDAY-SMITH/
date = 2008-06-20
work = The Boston Phoenix
publisher =
quote = Last night, Amanda Palmer kicked off this season of the Boston Pops EdgeFest, the orchestra’s collaboration with younger, “edgier” bands and performers drawing the iPod generation into Symphony Hall. The choice of pairing Palmer with the Pops lead me to wonder if the Pops had ever listened to a Dresden Dolls album or seen The Onion Cellar or, you know, met her.] [cite web
url =
title =
accessdaymonth = 8 Dec
accessyear = 2007
last = Palmer
first = Amanda
date = 2007-04-01
work = Speculation: Solo Album Title
publisher = The Dresden Dolls
quote = ... i am recording the solo album....in nashville, at ben folds' studio, with ben, who is producing the record and playing on it.]

She has amassed an online following of over 60,000 people. [cite web
url = http://www.myspace.com/whokilledamandapalmer
title = Amanda Palmer - Alternative / Rock / Other
accessdaymonth = 07 Jul
accessyear = 2008
publisher = myspace.com
quote = Amanda Palmer has 61053 friends. This friend count is as of the access date, and is the number of distinct myspace accounts that have asked for regular bulletins from the artist.]

Amanda's residence in Boston, the Cloud Club, was the subject of a 2006 Documentary on the Boston Channel website as well as YouTube.

Amanda practices meditation and has written an article "Melody vs. Meditation," [cite web
url = http://theworsthorse.net/amandapalmer/amandapalmer.html
title = Melody vs. Meditation
accessdaymonth = September 19
accessyear = 2008
date = 09/19/2008
work = May 2008 Issue, Shambhala Sun
publisher = original publisher = Shambhala Sun Foundation, but the article can be found, with permission at, theworsthorse.blogspot.com] for the Buddhist Publication on the struggle between being a songwriter and being able to clear one's mind in order to meditate.

As a solo artist