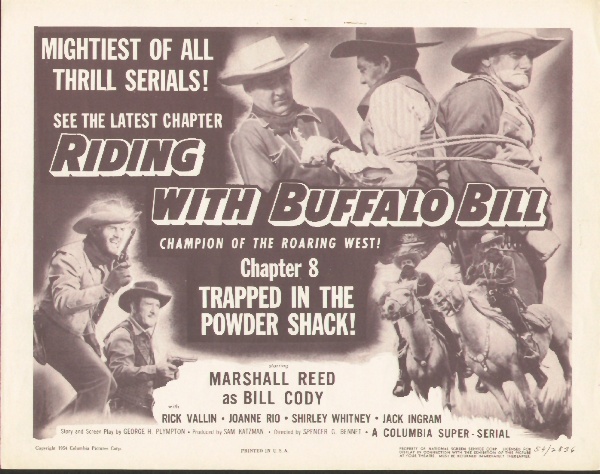 In this serial, the intrepid Buffalo Bill Cody comes to aid miner Rocky Ford and a group of ranchers in their defeat of a local crime lord, King Carney, who is trying to keep the new railroad out of the territory in order to carry on with his illegal operations. Then Rocky asks Cody to don the disguise of a legendary masked man, known as "The Ridin' Terror", who once before smashed outlaw rule in the area. In response, Cody enlists the support of Rocky, the settler Reb Morgan and his sister Ruth, and plans offensive strategy to eradicate Carney and his outlaws. It takes him 15 episodes, each full of thrilling chases, fights, and assorted action all backed by a competent musical score.

# The Ridin' Terror From St. Joe
# Law of The Six Gun
# Raiders From Ghost Town
# Cody To The Rescue
# Midnight Marauders
# Under The Avalanche
# Night Attack
# Trapped In The Powder Shack
# Into An Outlaw Trap
# Blast To Oblivion
# The Depths of the Earth
# The Ridin' Terror
# Trapped In The Apache Mine
# Railroad Wreckers
# Law Comes To The West

*Marshall Reed, a longtime favorite villain in serials and westerns during the 1940s and 1950s, brought a new facet to his work by starring as the famous hunter and Indian scout . Reed, a relatively unlikely choice for a serial hero, was surprisingly effective in the title role. After that, he resumed his career in supporting roles, bit parts and walk ons.
*Thanks to liberal use of stock footage from prior Columbia westerns and serials, the primary source for this production came from the 1940 serial "Deadwood Dick".
*, the assistant director, later produced the long-running television series "", "" and "Dallas".