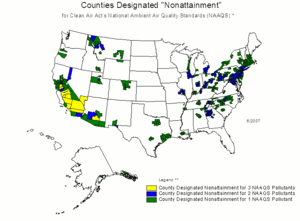 Counties in the United States where one or more National Ambient Air Quality Standards are not met, as of June 2007.

The National Ambient Air Quality Standards (NAAQS) are standards established by the United States Environmental Protection Agency under authority of the Clean Air Act (42 U.S.C. 7401 et seq.) that apply for outdoor air throughout the country. Primary standards are designed to protect human health, with an adequate margin of safety, including sensitive populations such as children, the elderly, and individuals suffering from respiratory diseases. Secondary standards are designed to protect public welfare from any known or anticipated adverse effects of a pollutant. A district meeting a given standard is known as an "attainment area" for that standard, and otherwise a "non-attainment area".[1]

The standards are listed in Title 40 of the Code of Federal Regulations Part 50.

An air quality control region is an area, designated by the federal government, where communities share a common air pollution problem. [2]