Sweden in the Eurovision Song Contest 2008

Sweden in the Eurovision Song Contest 2008 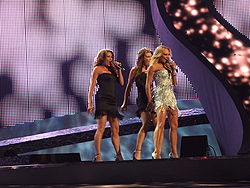 Charlotte Perrelli and backup singers performing "Hero" at the 2nd semi-final of the Eurovision Song Contest 2008.

Sweden selected its entry for the Eurovision Song Contest 2008 by holding an extending national selection, namely Melodifestivalen 2008. A record of 3 489 entries were submitted to the broadcaster SVT, and 28 were chosen to compete. They were completed with 4 wildcards in the end of December. Melodifestivalen was also this year held on Saturdays, starting with the first of the four semi-finals on 9 February and ending with a final on 15 March. It was the last of the year's national selections, as the official ESC draw was held on 17 March. Four songs progressed from each semi, two to the final and two to the second chance round, where the songs were competing in a knock-out round to gain the last two places in the final.

The final was won by Charlotte Perrelli with the song "Hero", which was written and composed by Fredrik Kempe and Bobby Ljunggren. Sanna Nielsen, who was the favourite of televoters, came second, as she did not receive enough points from the 11 juries.

Charlotte Perrelli competed in the second semi-final on 22 May. She did not actually finished among the ten best, but thanks to the new rule that the last finalist will be chosen by the back-up juries, she took the final ticket at the expense of Macedonia. The actual placement was 12th, 7 points after Macedonia and 2 points after Bulgaria. She was drawn into the 15th spot in the final. Although being one of the heavy favorites before the final, Sweden did not finish higher than 18th, receiving only 47 points.

The commentators for the event for SVT were Kristian Luuk and Josef Sterzenbach, with a brief appearance by Carl Bildt in the final. The spokesperson announcing the votes for Sweden was Björn Gustafsson.[1][2] 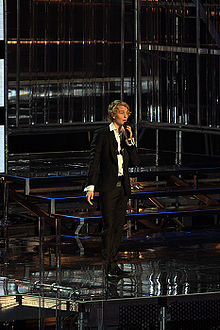 Björn Gustavsson performed interval performances at all the semifinals, and the final.

Melodifestivalen 2008 was the 47th Melodifestivalen, and the selection process for the 48th song to represent Sweden at the Eurovision Song Contest. A new rule—Lex Agnes—went into effect in 2008 calling for each submitted entry to include a document containing all information relevant to the song. It was named after Agnes Carlsson, who was disqualified from the 2007 competition for publicly revealing details of her song before the deadline.[3]

Melodifestivalen 2008 included 32 songs split up into four semi-finals with eight participants in each. The semi-finals were held between 9 February and 1 March 2008 and at each, the two top placing songs went to the final, while the third and fourth place songs went to the Andra Chansen (Second Chance Round). At the Andra Chansen, held on 8 March 2008, the eight songs paired off in two rounds with the two winners at the end of the night qualifying for the final. The final was held on 15 March 2008 and included the eight songs from the semi-finals along with the two from the Andra Chansen to make ten songs in all. The winner and selected entrant for the Eurovision Song Contest was then chosen by (insert voting process here).

It was hosted by Kristian Luuk, who also hosted the 2007 event.[4] Luuk was assisted by Björn Gustafsson and Nour El-Refai.

The semifinals for Melodifestivalen 2008 began on 9 February 2008. There were five semifinals in Gothenburg, Västerås, Linköping, Karlskrona and Kiruna (Andra Chansen) leading up to the final at the Globen on 15 March 2008. Nearly four million votes were cast in total, raising over 5.7 million kronor (€605,000) for charity.

The first semi-final of Melodifestivalen was held at the Scandinavium in Gothenburg on 9 February 2008. Eight songs in total competed, seven songs which had been submitted to SVT, along with one of the four wildcards.

The two songs that progressed automatically to the final were "Thank You" by Amy Diamond, the wildcard, and "I Love Europe" by Christer Sjögren. The two songs that passed to the Andra Chansen round were "Line of Fire" by E-Type & The Poodles and "Visst finns mirakel" by Suzzie Tapper.

The second semi-final was held on 16 February 2008, at the ABB Arena Nord in Västerås. Again eight songs competed in total, seven songs which had been submitted to SVT and one of the four wildcards.

The two songs that progressed automatically to the final were "Empty Room" by Sanna Nielsen and "Just a Minute" by Rongedal. The two songs that passed to the Andra Chansen round were "One Love" by Andreas Johnson & Carola Häggkvist, the wildcard, and "Love in Stereo" by Ola Svensson.

The third semi-final of Melodifestivalen 2008 was held at the Cloetta Center in Linköping on 23 February 2008.

The two songs that progressed directly to the final were "Lay Your Love on Me" by BWO and "Upp o hoppa" by Frida feat. Headline. The two songs that passed to the Andra Chansen round were "Smiling in Love" by Caracola and "When You Need Me" by Thérèse Andersson. The wildcard entry, "Hallelujah New World" by Eskobar, came last in the televoting and failed to qualify.

The final semi-final of Melodifestivalen 2008 before the Andra chansen round was held on 1 March 2008, at the Telenor Arena in Karlskrona.

The final two artists to automatically secure their place in the final were Charlotte Perrelli with "Hero" and Linda Bengtzing with the song "Hur svårt kan det va?". The two artists to proceed to the Andra Chansen round were Sibel Redzep with the song "That Is Where I'll Go" and Nordman with the song "I lågornas sken". The wildcard entry for this semi-final was Niklas Strömstedt with the song "För många ord om kärlek", which came last in the televoting.

The two winners of Andra Chansen that went on to the final were Sibel Redzep with the song "That Is Where I'll Go" and Nordman with the song "I lågornas sken".

The final of Melodifestivalen 2008 was held on 15 March 2008 at the Globe Arena in Stockholm. The eight direct qualifiers and the two Andra Chansen winner competed in the final, where the 11 regional juries of Sweden, along with televoting, selected the winner that would represent Sweden in the Eurovision Song Contest 2008.

Sweden qualified from the second semi-final as the jury wildcard. They performed 15th in the final, behind Latvia and before Denmark, where they achieved 18th place and 47 points.