A badge of shame, also a symbol of shame, mark of shame, or simply a stigma,[1] is typically a distinctive symbol required to be worn by a specific group or an individual for the purpose of public humiliation, ostracism, or persecution. Under the Poor Law Act of 1697, paupers in receipt of parish relief were required[where?] to wear a badge of blue or red cloth on the shoulder of the right sleeve in an open and visible manner, in order to make life more humiliating for the poor.[2]

The yellow badge that Jews were required to wear in parts of Europe during the Middle Ages,[3] and later in Nazi Germany and German–occupied Europe, was intended to be a badge of shame.[4] The term may also refer to other identifying marks that are associated with shame. The biblical "Mark of Cain" can be interpreted as synonymous with a badge of shame.[5][6][7][8] The term is also used metaphorically, especially in a pejorative sense, to characterize something associated with a person or group as shameful.[9]

Punitive depilation of men, especially burning off pubic hair, was intended as a mark of shame in ancient cultures[which?] where male body hair was valued.[10] Women who committed adultery have also been forced to wear specific icons or marks, or had their hair shorn, as a badge of shame throughout history.[11] Many women who fraternized with the occupiers in German–occupied Europe had their heads shaved by angry mobs of their peers after liberation by the Allies of World War II.[12]

During the war, the Nazis also used head shaving as a mark of shame to punish Germans like the youthful non-conformists known as the Edelweiss Pirates.[13] Additionally, stigma can be invisible, such as is the case with negative attitudes leading to prejudice of persons with mental disorders.

In Ancient Rome, both men and women originally wore the toga, but over time matrons adopted the stola as the preferred form of dress, while prostitutes retained the toga. Later, under the Lex Julia, women convicted of prostitution were forced to wear a toga muliebris, as the prostitute's badge of shame.[14]

At the beginning of the 13th century, Pope Innocent III prohibited Christians from causing Jews bodily harm, but supported their segregation in society. On at least one occasion he likened this to the fate of Cain described in the Book of Genesis, writing to the Count of Nevers:

The Lord made Cain a wanderer and a fugitive over the earth, but set a mark upon him,… as wanderers must [the Jews] remain upon the earth, until their countenance be filled with shame…
—[15]

After Innocent III later presided over the Fourth Council of the Lateran in 1215,[16] the council adopted canon 68, requiring Jews (and Muslims) to dress distinctively to prevent interfaith relations.[17] This canon was largely ignored by the secular governments of Europe until 1269 when King Louis IX of France, later Saint Louis, was persuaded to decree that French Jews must wear a round yellow badge on their breast and back.[18][19] After the Albigensian Crusade ended in 1229, the subsequent Papal inquisition of Pope Gregory IX imposed the ecclesiastical penance of the Cathar yellow cross as a badge of shame to be worn by the remaining repentant Cathars convicted of heresy.[20]

In colonial New England during the 17th and 18th centuries, courts required people convicted of sexual immorality to wear the letter 'A' or letters 'AD' for adultery and the letter 'I' for incest on their clothing.[21] Striped prison uniforms commonly used in the 19th century were abolished in the United States early in the 20th century because their continued use as a badge of shame was considered undesirable.[22]

Societies have marked people directly in the practice generally known as being "branded a criminal". Criminals and slaves have been marked throughout history with tattoos.[26] Sexual immorality in colonial New England was also punished by human branding with a hot iron, by having the marks burned into the skin of the face or forehead for all to see.[21] The practice of human branding with visible marks on the face had been firmly established by King Edward VI of England under the 1547 Statute of Vagabonds, which specified the burning of the letter 'S' on the cheek or forehead of an escaped slave, and the letter 'F' for 'fraymaker' on the cheek of a church brawler.[27]

James Nayler, an English Quaker convicted of blasphemy in 1656, was famously branded with a 'B' on his forehead.[27] The practice of human branding was abolished in England by 1829.[27] It continued in the United States until at least 1864, during the American Civil War, where some deserters from the Union Army had their face branded with the letter 'D' as a mark of shame intended to discourage others.[28] 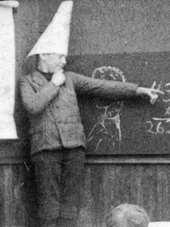 A child wearing a dunce cap in class, from a staged photo c.1906

In old-fashioned French schoolrooms, misbehaving students were sent to sit in a corner of the room wearing a sign that said "Âne" meaning donkey or ass, or were forced to wear a jester's cap with donkey's ears, sometimes conical in shape, known as a "cap d'âne", meaining "ass' head". In traditional British and American schoolrooms, the tall conical "dunce cap", often marked with the letter 'D', was used as the badge of shame for disfavored students.[29][30] The dunce cap is no longer used in modern education, although other forms of shame are still used to punish students.[31] 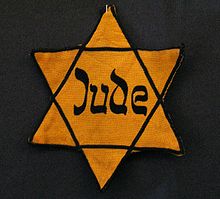 Nazi concentration camp badges of shame were triangular and color coded to classify prisoners by reason for detention,[32] and Jews wore two triangles in the shape of the six-pointed Star of David. These symbols, intended by the Nazis to be marks of shame, had opposite meanings after World War II: the triangle symbols were used on memorials to those killed in the concentration camps,[32] the pink triangle that homosexual prisoners were required to wear became a symbol of gay pride,[33] and the Zionists' Star of David, also co-opted for the Nazi version of the yellow badge, was subsequently featured prominently on the flag of Israel.[34][35][36][37]

Conversely, symbols intended to have positive connotations can have unintended consequences. After World War I the U.S. War Department awarded gold chevrons to soldiers serving in the combat zones in Europe. The silver chevrons awarded for honorable domestic service in support of the war effort were instead considered a badge of shame by many recipients.[38][39]

More recently, in 2007, the Bangkok, Thailand police switched to punitive pink armbands adorned with the cute Hello Kitty cartoon character when the tartan armbands that had been intended to be worn as a badge of shame for minor infractions were instead treated as collectibles by offending officers forced to wear them, creating a perverse incentive.[40] The revised scheme, however, was also shortly disbanded.[41]

In Nathaniel Hawthorne's classic 1850 romance novel The Scarlet Letter, set in 17th century Puritan Boston, the lead character Hester Prynne is led from the town prison with the scarlet letter “A” on her breast. The scarlet letter "A" represents the act of adultery that she had committed and it is to be a symbol of her sin for all to see. Originally intended as a badge of shame, it would later take on different meanings as her fictional life progressed in the story.[42]

The 1916 silent film The Yellow Passport, starring Clara Kimball Young, was also known as The Badge of Shame when it was reissued in 1917.[43][44]

In the 2006 film, Pirates of the Caribbean: Dead Man's Chest, Lord Cutler Beckett (Tom Hollander) is seen using as a fireplace poker, a branding iron with the letter 'P' that he used to impart the "pirate's brand" seen on the right forearm of Captain Jack Sparrow (Johnny Depp).[45] According to the backstory, Sparrow was branded a pirate by Beckett for refusing to transport slaves for the East India Trading Company.[46]

In the film Inglourious Basterds the protagonists carve swastikas into the foreheads of surviving Nazis, to make their malfeasance known to all in the future.