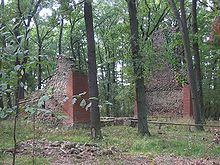 The remains of a fieldstone church in Dangelsdorf, Germany, from the 14th century 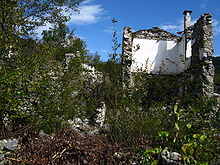 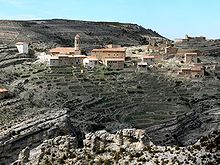 Cañada de Benatanduz, a town that has been practically abandoned in Teruel, Spain 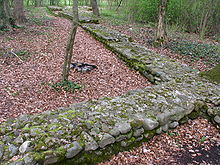 An abandoned village is a village that has, for some reason, been deserted. In many countries, and throughout history, thousands of villages were deserted for a variety of causes. Abandonment of villages is often related to plague, famine, war, climate change, environmental destruction, or deliberate clearances.

In the United Kingdom, several phases of village abandonment have occurred, resulting in what have become known as deserted medieval villages.

In the early centuries of the Middle Ages, the population of Britain increased rapidly. This meant that farmland was in short supply, and so many villages were established upon less fertile lands. However, from around 1200 onwards, the climate became harsher, as what is sometimes called the "Little Ice Age" began. Villages situated on exposed uplands or upon clay vales where the soil became waterlogged bore the brunt of the changes. Eventually, crop failures forced many such villages to be abandoned.

In 1348, the Black Death arrived; between 30–50% of the British population was killed in the years that followed. Many village abandonments have been attributed to the Black Death, although relatively few are known to have been directly caused by it. Many depopulated villages were soon re-settled and re-populated, especially those with productive lands. The indirect effects of the Black Death, however, proved fatal to many villages, especially those inhabited by serfs who found themselves emancipated after the feudal system collapsed.

Throughout most of the Middle Ages, labour was plentiful and cheap, but after the Black Death, labour became in short supply. This improved the bargaining position of labourers, who demanded better pay and conditions from landowners.

In response, many landowners discovered that the rearing of sheep for wool, was far more profitable than rent from tenants. Common land was then enclosed – a flock of sheep only needed a handful of shepherds to look after them, and villagers who were no longer required were evicted from the lands.

The process of enclosures flourished throughout the 15th and 16th centuries, and led to many thousands of villages being deserted. This led to poverty and homelessness amongst rural dwellers, and gave rise to mass revolts in 1536, 1569, and 1607. Most notoriously, the Highland Clearances in northern Scotland led to significant depopulation.

Many villages were deliberately cleared throughout history. The Harrying of the North caused widespread devastation in the winter of 1069–1070. In the 12th and 13th centuries, many villages were removed to make way for monasteries. Later on, in the 18th century, it became fashionable for land-owning aristocrats to live in large mansions set in large landscaped parklands. Villages that obstructed the view were removed. By the early 19th century, it had become common to provide replacement villages, though in many cases, communities were turned out into the road.

In modern times, a few villages have been abandoned due to reservoirs being built and the location being flooded. These include Mardale Green in the English Lake District and two villages – Ashopton and Derwent – drowned by the Ladybower Reservoir in Derbyshire. In other cases, such as Tide Mills, East Sussex, Imber and Tyneham, the village lands have been converted to military training areas. Villages in Northumberland have been demolished to make way for open cast mines. Hampton-on-Sea was abandoned due to coastal erosion thought to have been exacerbated by the building of a pier.[1]

In Australia, the government requires operators of mining towns to remove all traces of the town when it is abandoned. This has occurred in the case of Mary Kathleen, Goldsworthy and Shay Gap. Some towns have been lost or moved when dams are built.

Villages have been abandoned as a result of the Cyprus dispute. Some of these are reported to be landmined.[2] 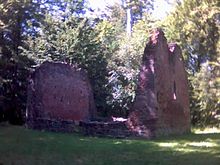 There are hundreds of abandoned villages, known as Wüstungen, in Germany. Geographer Kurt Scharlau categorized the different types in the 1930s, making distinctions between temporary and permanent Wüstung, settlements used for different purposes (farms or villages), and the extent of abandonment (partial or total).[3] His scheme has been expanded, and has been criticized for not taking into account expansion and regression. A distinction is commonly made between Flurwüstungen (farmed areas) and Ortswüstungen (sites where buildings formerly stood) by archaeologists. The most drastic period of abandonment in modern times was during the 14th and 15th centuries – before 1350, there were about 170,000 settlements in Germany, and this had been reduced by nearly 40,000 by 1450.[4] As in Britain, the Black Death played a large role in this, as did the growth of large villages and towns, the Little Ice Age, the introduction of crop rotation, and war (in Germany, particularly the 30 Years War). In later times, the German Empire created a number of training grounds for the military that were eventually abandoned.

Many villages in remote parts of the New Territories, Hong Kong, usually in valleys or on islands, have been abandoned due to inaccessibility. Residents go to live in urban areas with better job opportunities. Some villages have been moved to new sites to make way for reservoirs or new town development. See also walled villages of Hong Kong and list of villages in Hong Kong.

Hundreds of villages were abandoned during the Ottoman wars in the Kingdom of Hungary in the 16–17th century. Many of them were never repopulated and generally left few visible traces. Real ghost towns are rare in present-day Hungary, except the abandoned villages of Derenk (left in 1943) and Nagygéc (left in 1970). Due to the decrease of rural population beginning in the 1980s dozens of villages are now threatened with abandonment. The first village officially declared as "died out" was Gyűrűfű in the end of the 1970s but later it was repopulated as an eco-village. Sometimes depopulated villages were successfully saved as small rural resorts like Kán, Tornakápolna, Szanticska, Gorica and Révfalu.

About ten million people, approximately one-third of the population of the affected area, are estimated to have died in the famine. Regions where the famine occurred included especially the modern Indian states of Bihar and West Bengal, but the famine also extended into Orissa and Jharkhand as well as modern Bangladesh. Among the worst affected areas were Birbhum and Murshidabad in Bengal, and Tirhut, Champaran and Bettiah in Bihar.

A partial shortfall in crops, considered nothing out of the ordinary, occurred in 1768 and was followed in late 1769 by more severe conditions. By September 1769 there was a severe drought, and alarming reports were coming in of rural distress. These were, however, ignored by company officers.

By early 1770 there was starvation, and by mid-1770 deaths from starvation were occurring on a large scale. There were also reports of the living feeding on the bodies of the dead in the middle of that year. Smallpox and other diseases further took their toll of the population. Later in 1770 good rainfall resulted in a good harvest and the famine abated. However, other shortfalls occurred in the following years, raising the total death toll.

As a result of the famine, large areas were depopulated and returned to jungle for decades to come as the survivors migrated en masse in a search for food. Many cultivated lands were abandoned – much of Birbhum, for instance, returned to jungle and was virtually impassable for decades afterwards. From 1772 on, bands of bandits and thugs became an established feature of Bengal, and were only brought under control by punitive actions in the 1780s.

As a consequence of the Arab-Israeli War of 1948-9, about half million Arabs were displaced, leaving an estimated three hundred Arab villages and towns in Israel abandoned. In addition, several Jewish communities in what became the West Bank and Gaza Strip were also abandoned.

In August 2005, Israel evacuated Gush Katif and all other Jewish communities in the Gaza Strip. Some structures in these settlements, including greenhouses and synagogues, were left standing after the withdrawal.

Oases and villages in North Africa have been abandoned due to the expansion of the Sahara desert.[citation needed]

Many Saxon villages in Transylvania became de-populated or abandoned when their German-speaking inhabitants emigrated to Germany in the 1990s.