The Battle of Belmont was fought on , , in . It was the first test in combat for Brig. Gen. , future general in chief and U.S. president.

On , Grant sailed from , to make a demonstration against the Confederate river fortress at . The next morning, he learned that Confederate troops had crossed the from Columbus to . He landed on the shore and started marching the mile to Belmont. The Federals routed the Confederates out of their camp and destroyed it. The scattered Confederate forces reorganized and received reinforcements from Columbus. Counterattacked by the Confederates and under heavy artillery fire from across the river, the Union force withdrew and reembarked to . Grant did not accomplish much in this operation, but, at a time when little Union action occurred anywhere, many were heartened by any activity. 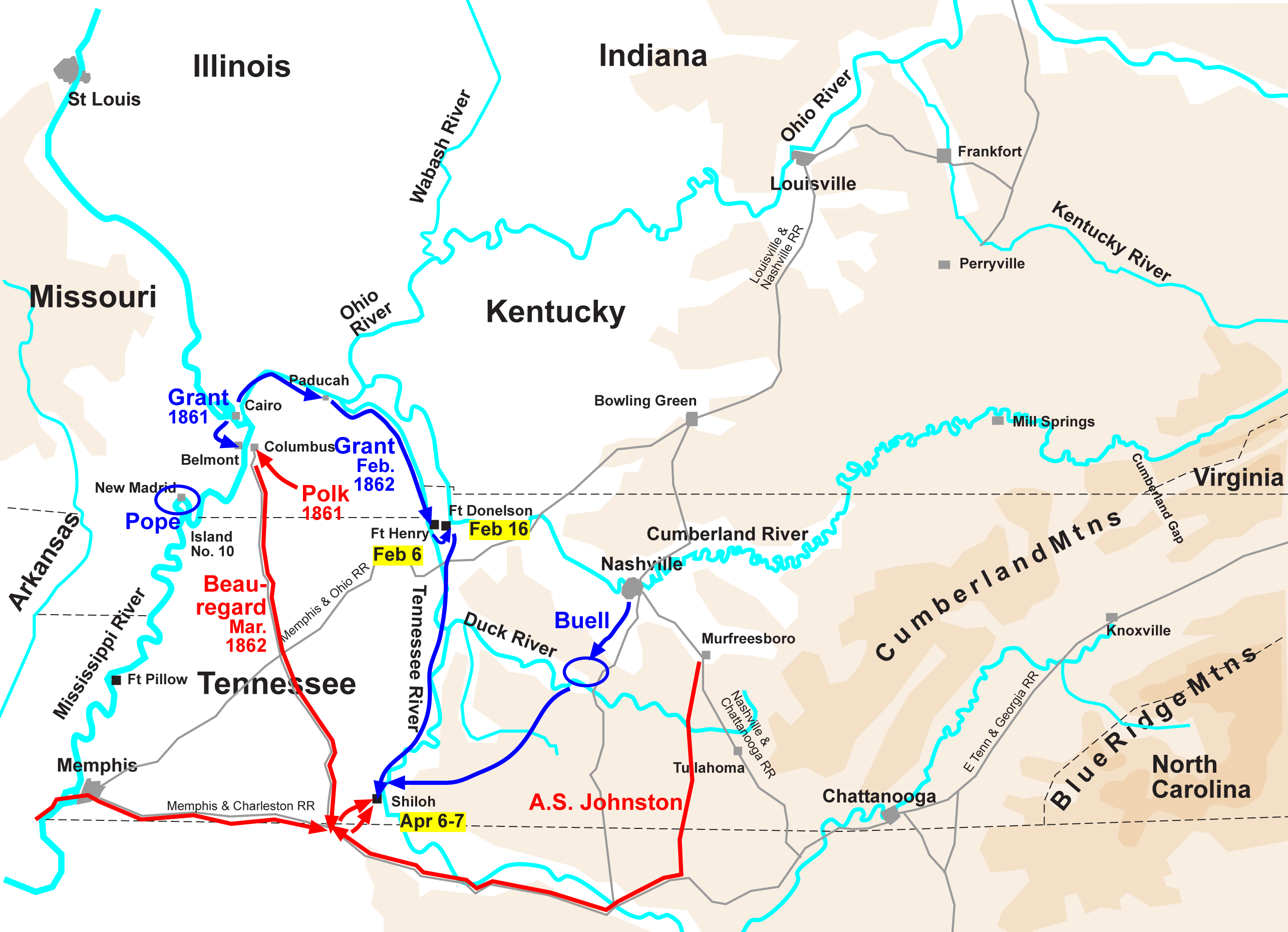 thumb|400px|Operations in the Western Theater from Belmont (November 1861) to Shiloh (April 1862)At the beginning of the Civil War, the critical border state of , with a pro-Confederate governor and a pro-Union legislature, had declared neutrality between the opposing sides. This neutrality was first violated on , , when Confederate Maj. Gen. occupied Columbus, a key position atop the bluffs above the Mississippi River, and two days later Union Brig. Gen. , displaying the personal initiative that would characterize his later career, seized Paducah. Grant, commanding the District of Southeast Missouri, requested permission from theater commander Maj. Gen. to attack Columbus, but no orders came, and for the next two months only limited demonstrations were conducted. [Nevin, p. 46.]

Frémont learned that the Confederates planned to reinforce their forces in and on he ordered Grant to make a feint toward Columbus to tie down the Confederates there. Initially, Grant sent about 3,000 men under Col. Richard Oglesby into southeastern Missouri. When he learned that a large number of Confederate reinforcements were moving into Missouri in the direction of Oglesby's column, Grant sent reinforcements to Oglesby and he ordered Brig. Gen. Charles F. Smith to move from Paducah into southwestern Kentucky, meant to distract the Confederates. Grant chose to demonstrate against Belmont, a ferry landing and tiny hamlet consisting of three shacks, 2,000 feet across the Mississippi from Columbus. Grant's so-called Expeditionary Command comprised 3,114 men organized into two brigades under Brig. Gen. and Col. , two cavalry companies, and an artillery battery. On , escorted by the gunboats USS "Tyler" and USS "Lexington", Grant's men sailed downriver from Cairo on the transport ships "Aleck Scott", "Chancellor", "Keystone State", "Belle Memphis", "James Montgomery", and "Rob Roy". [Gott, p. 41; Eicher, pp. 142-43; Nevin, p. 48; Feis, p. 207.]

On the Confederate side, Leonidas Polk had about 5,000 troops in Columbus. When he learned of Grant's departure from Cairo, he assumed that Columbus was their primary objective and that Belmont was merely a feint. He sent 2,700 of his men under Brig. Gen. to Belmont, reserving the remainder for the defense of Columbus.

Grant found that at Belmont there was a small Confederate camp of observation, named Camp Johnston, and an artillery battery. He decided to attack to prevent the Confederates from reinforcing the nearby forces of Maj. Gen. or Brig. Gen. of the , and to protect Oglesby's exposed left flank from attack.

Grant's attack pushed back the skirmish lines and for the remainder of the morning, both armies, consisting primarily of inexperienced recruits, advanced and fell back repeatedly. By 2 p.m., the fighting became one-sided and Pillow's line began to collapse, withdrawing toward Camp Johnston. An orderly retreat began to panic and four Federal guns bombarded the retreating soldiers. After a mass volley from the 31st Illinois, killing dozens of Confederates, the Union soldiers attacked from three sides and surged into the camp. The Confederates abandoned their colors and their guns and ran toward the river and two transports, the "Prince" and the "Charm", attempting to escape. During these advances, Grant was at the front, leading his troops. His horse was shot out from under him, but he mounted an aide's horse and continued. [Nevin, p. 48; Eicher, p. 144.]

Grant's inexperienced soldiers became, in his words, "demoralized from their victory." Brig. Gen. McClernand walked to the center of the camp, which now flew the Stars and Stripes, and asked for three cheers. A bizarre, carnival-like atmosphere prevailed upon the troops, carried away by the joy of the moment, having taking several hundred prisoners and the camp. To regain control of his men, who were plundering and partying, Grant ordered the camp set on fire. In the confusion and blinding smoke, wounded men in some of the tents may have been accidentally burned to death, giving the appearance to later Confederates that they had been deliberately murdered. [Eicher, pp. 144-45.]

As the Federals began to march back to their transports, with two captured guns and 106 prisoners, they were surprised to be attacked by Confederate reinforcements that had arrived on the "Prince" and the "Charm" and appeared to cut off Grant's avenue of withdrawal. They were fresh troops from the 15th Tennessee Infantry, the 11th Louisiana Infantry, and mixed infantry under Pillow and Col. . As the Union men faced the Confederate reinforcements, the "Lady Polk" fired into their ranks from Columbus and numerous other Confederate guns opened fire. The Union gunboats returned fire. Grant was quoted as saying calmly, "Well, we must cut our way out as we cut our way in." [Eicher, p. 145; Nevin, p. 48.]

At the landing, one Union regiment was unaccounted for, separated from view by the terrain. Grant galloped back to look for it, but found only a mass of Confederate soldiers moving in his direction. He spun around and raced for the river, but saw that the riverboat captains had ordered the mooring lines to be cast off. Grant wrote in his memoirs, "The captain of the boat that had just pushed out recognized me and ordered the engineer not to start the engine: he then had a plank run out for me. My horse seemed to take in the situation. He put his fore feet over the bank without hesitation or urging, and, with his hind feet well under him, slid down the bank and trotted on board." [Gott, p. 43; Nevin, p. 48.]

The Confederates claimed Belmont as a victory, but it was an inconclusive and pointless battle. Grant had staged a demonstration and it was beaten off. The Union losses were 607 (120 dead, 383 wounded, and 104 captured or missing). Confederate casualties were 641 (105 killed, 419 wounded, 106 captured, and 11 missing). Probably the most important result of the battle was to give Grant some initial combat experience commanding a large force. It also gave President , who was desperate for his armies to begin attacking the Confederates somewhere that winter, a positive impression of Grant. [Eicher, p. 147.]