Drypool (archaic Dripole.[note 1]) is an area within the city of Kingston upon Hull, England

Historically Drypool was a village, manor and later parish on the east bank River Hull at the confluence of the Humber Estuary and River Hull,[1] it is now part of the greater urban area of Kingston upon Hull, and gives its name to a local government ward.

The hamlet of Drypool lay on the east bank of the river Hull, roughly opposite the Old Town;[2] it is mentioned in the Domesday Book, where it is said that the two manors of "Sotecote and Dridpol" were worth thirty shillings at the time of Edward the Confessor.[3] Both manors were owned by Drogo de Bevrere, a relative by marriage of William I.[3]

Drypool was a chapelry of the parish of Swine; the region consisted mostly of floodable low lying land or fen; Drypool, literally meaning "Dried up pool" was one of the areas (along with Southcoates) which was sufficiently raised to be habitable.[2][4] To the north east of the hamlet was the area known as Summergangs, a region of Ings only usable in summer.[2] During the early medieval period work was undertaken to improve the land by drainage; in the 13th century Saer de Sutton[note 2] created a drainage ditch (later known as Summergangs Dike),[note 3] and is though to have diverted the river Hull along a new more easterly route, along the stream known as 'Sayer's Creek';[5][8] these waterways, along with the river Wilflete[note 4] and the Humber later formed the boundaries of parish of Drypool.[2][5]

In 1302 a road from Hull to Hedon was made into a King's highway; it which originated at the river Hull, passing though Drypool and then roughly northeastwards through 'Suttecotes Som'gang' (Summergangs) passing Southcoates at the west side before joining the old Sutton to Hedon road at Bilton;[9] this was later to become Holderness Road (A165).[10]

There were jetties on the river at Drypool, one was removed in 1470, possibly due to silting of the haven,[11] or due to the threat of invasion.[12] There was also a staith for the 'north ferry' across the Hull; it became obsolete after the North Bridge was built as part of Henry VIII's fortifications of Hull.[13]

During the Pilgrimage of Grace Hull had been taken by the rebels,[14] after the rebellion Henry VIII and ordered improvements to the fortifications of the town; these included the construction of a castle and blockhouses on the Drypool side of the river, as well as a bridge connecting the two banks at a cost of £23,155 17s 5d.[15] After the restoration of Charles II of England the obsolete fortifications on the east bank of the river were extended and improved, at the same time incorporating a garrison into the city which had sided with the Parliamentarians during the Civil War; the new fortress, "The Citadel" was a moated triangular bastioned artillery fortification built in the south west corner of Drypool; approximately 30 acres (120,000 m2) of land was taken by the new fortification.[2][16] The area of the citadel became known as Garrison Side, and was an extra-parochial area (1880s).[17] 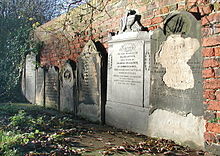 Gravestones, site of the former St. Peter's church and graveyard

The Domesday Book does not mention a church in Drypool, though one is shown on a drawing of 1350; some archaeological evidence suggests a date of as early as the 12th century for its construction. The original church of St. Peter[note 5] was demolished in 1822,[21][22] being in ruinous condition; and with the intention of building a new larger vessel, with over a 1000 seats, increased from 200. The new church was designed by William Hutchinson and had a four bayed nave incorporating the former church's arches and windows, with a four story tower, and was entirely rendered in cement, it was completed in 1823.[map 1][23] The church's chancel was rebuilt in 1867. St. Peter's remained in used until 1941 when it was destroyed during the Second World War.[21]

There was briefly a church in the former cemetery on Hedon Road, first called St. Nathaniel, later St. Bartholemew's;[map 2] it was used to service the growth of population due to the construction, and operation of Alexandra Dock. Initially a sacristy (the mortuary chapel) in the cemetery was used, in 1891 replaced by a iron church of the tin tabernacle type.[24] The church closed and was demolished in 1929; the cemetery was later converted into park gardens by Hull City Corporation.[21]

The church of St. Andrew was consecrated in 1878;[map 3][21] designed by architects 'Adams & Kelly' in Geometric Decorated Gothic style of brick with stone; it was built in response to the expansion of the east of the town due to the construction of Victoria Dock,[25] and became the parish church in 1879. The parish church became St. Columba in 1961.[21] St. Andrews has been demolished.

The church of St. Columba in the Garden Village area of Summergangs became the parish church for Drypool in 1961.[21]

On Rosemead Street another temporary church was opened in 1919, but burnt to the ground in 1923. A permanent replacement 'St. John the Evangelist' was built 1925, but was bombed in 1941 during the Second World War, after repairs it was reopened in 1952.[26][map 4]

In The Groves in the parish of Sutton was St. Mark's, built in brick with stone facings 1844 in early medieval style. It was bomb damaged during the Second World War and demolished in the late 1950s.[27]

The Wesleyan Methodist Holderness Road Methodist Chapel was opened in 1962, replacing the 1877 Brunswick Chapel on the same site,[map 6] built to replace a temporary school and church built in 1873 nearby on Durham Street.[31] The was also a church on Lime Street in The Groves built 1826.[map 7] It was later used as a Sunday School, then by the Methodists, then as a warehouse.[31] Another building on Church Street/Raikes street corner (Drypool) was built in 1805, used first as Sunday school, and from 1877 (to 1930) as a chapel.[map 8][31] Both were superseded by Kingston Chapel,[map 9] built in a Greek architectural style with an Ionic portico. It opened in 1841, with ~2000 seats.[31][32] The chapel was damaged in 1941 by bombing, and later demolished.[31]

The Congregationalist Latimer Church in Williamson Street,[map 16] was built in 1875 in red and white brick in gothic style. In 1923 it was taken over by the Port of Hull Society for the Religious Instruction of Seamen.[28][31][note 9] The Salvation Army built a Citadel in Franklin Street in 1970, closed in 2006 and converted to housing.[map 17][36]

A Presbytarian church in the Gothic Revival style was built in 1874 on Holderness Road, it bomb damaged in 1941, and was demolised in 1972 (part of the adjacent Sunday School remains).[map 18][31][37] There is a modern Evangelical Presbyterian church on Holderness Road.[38] 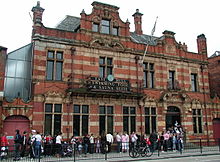 The East Hull Baths (Holderness Road) opened in 1898, and are adjacent to the James Reckitt Library,.[39] The building is of red brick with ashlar banding and decoration, the interior includes Art Noveau tiled decorations.[40][map 19] As of 2011 the building remains in use as council run public baths.

The James Reckitt Public Library (Holderness Road) opened in 1889 adjacent to the East Hull Baths to serve the east of Hull. It was Hull's first free library and was established by James Reckitt with more than 8000 books. The library was donated to the borough of Hull in 1892 when the city adopted the Public Libraries Act.[41][42] The building, designed by Albert Gelder was built of red brick with some ashlar window and banding features in a gothic revival style, a pyramidal tower roof was lost due to bomb damage during the Second World War, the remainder of the building is a listed structure.[43] The library closed in 2006.[44]

The local government ward of Drypool (2001) has its north east border formed by Labernum Avenue and Chamberlane Road, southwest of East Park, and its western border former by the river Hull, and its eastern border former by New Bridge Road, and the eastern limit of the Victoria Dock Village estate (Earle's Road). The population of the ward in 2001 was ~12,500.[45][46]

The local government ward of Drypool includes the entirely industrial area known as The Groves on Stoneferry Road, a western part of the area of Summergangs including the Garden Village estate and the house and grounds of Holderness House. Also within the ward are the Victoria Dock Village, the area known as Garrison Side including Sammy's Point and The Deep aquarium.

The southwestern part of Holderness Road lies in the ward; including the Mount Retail Park (2002), East Hull Baths (1898) and listed James Reckitt Library (1889), and the area known as Witham.

Drypool Ward is an electoral district returning three councillors to Hull City Council.[46] Both Labour and Liberal Democrat party candidates have been elected since 2007 in a roughly two way split of votes.[47]

The Anglican Parish of Drypool covers a larger area than the council ward, taking in parts of Southcoates West and Holderness Wards,[citation needed] with a catchment population of over 24,000; the parishes regular services take place in the churches of St Columba of Iona, St John the Evangelist, and Victoria Dock Church which (as of 2010) uses Victoria Dock Village Hall for public worship.[48]